One of the things that interests me about foreign films is the way various aspects of culture become lost in the translation to English. In some cases, this is due to the literal translation of dialogue, but in others it’s due to a physical mannerism or custom that simply can’t be translated. In a post about Lain’s Bear Pajamas in the Anime series Serial Experiments Lain, I mention an example of such a gesture that appears in Miyazaki’s Spirited Away. Of course, I got the details of the gesture completely wrong in that post, but the general concept is similar. Since Spirited Away is the next film in the Animation Marathon, I got the DVD and took some screenshots. The main character, a little girl named Chihiro, steps on a little black slug and the boiler room man, Kamaji, says that this is gross and will bring bad luck. So she turns around and puts her thumbs and forefingers together while he pushes his hand through (click the images for a larger version). 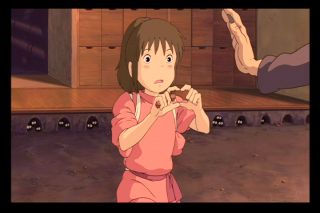 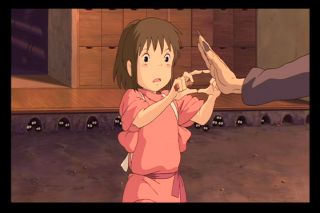 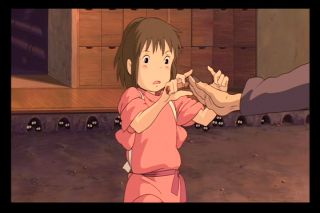 Now this is obviously some sort of gesture meant to counteract bad luck, but it’s a little strange. The dialogue in the scene helps, though the subtitles and the dubbing differ considerably (as I have been noticing lately). The subtitled version goes like this:

(CHIHIRO puts her hands in the shape of a rectangle.)

KAMAJI (pushing his hand through the rectangle): Clean!

Quite sparse, though the meaning is relatively clear. The dubbed version expands on the concept a little more:

KAMAJI: You killed it! Those things are bad luck. Hurry, before it rubs off on you! Put your thumbs and forefingers together.

(CHIHIRO puts her hands in the shape of a rectangle.)

KAMAJI (pushing his hand through the rectangle): Evil… begone!

I noticed this gesture the first time I saw the movie, because I thought it was stange and figured that there had to be a little more to it than what was really being translated. On the DVD there is a little featurette called The Art of ‘Spirited Away’ and in one of the sections, the translators mention that they were baffled by the gesture, and weren’t sure how to translate it. After researching the issue, they concluded that it’s essentially the Japanese equivalent to a cootie shot. Of course, this makes a lot of sense, and it’s totally something a kid would do in response to stepping on something gross (this film, like many of Miyazaki’s other films, seems to nail a lot of the details of what it’s like to be a kid). It also illustrates that the boiler room man isn’t quite as gruff as he appears, and that he even has a bit of a soft spot for children. Interestingly enough, this gesture is repeated again by a little mouse (I think it’s a mouse), and the soot balls that work in the boiler room, though I don’t remember that (I’ll try to grab screenshots when I rewatch the whole film)

Again, Spirited Away is the next film in the Animation Marathon, and it’s probably the best of the bunch as well. Expect a full review soon, though I’m not sure how detailed it will be. Filmspotting (the podcast that’s actually running the marathon) is on a bit of a break from the marathon, as they’re doing their obligatory 2006 wrap up shows and best of the year lists.