There were only two movies in the Animation Marathon that I hadn’t seen before, and they were the first two. Next up is Akira, a movie that I have seen multiple times in the past. My first thoughts upon initial viewings were that it had some interesting points but that it was ultimately an incoherent mess. However, it should be noted that I originally saw the movie many years ago on a crappy VHS tape with a dubbed soundtrack and a washed out transfer. The movie has since been fully restored, digitally remastered, and perhaps most importantly, it’s recieved a new translation. As a result, the film looked great and I could follow the story much better this time around, and my opinon of the film has improved considerably. It certainly has some flaws, but it really is a spectacular experience. Spoilers ahoy.

Along with Ghost in the Shell (the next film in the marathon), this film is often held up as the pinnacle of Anime and, as such, is generally considered to be “essential” viewing for someone interested in the form. Historically, this is the film that brought Anime to America (it was my first exposure to Anime as well), so it’s certainly important in that respect. Even so, I don’t know that it really would make a good introduction to the form, unless you are really into the gritty post-apocalyptic genre. 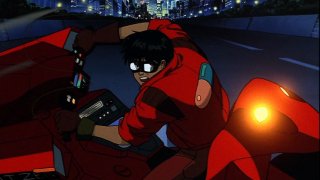 The story begins by showing Tokyo consumed by a large explosion that apparently sets off World War III. Thirty years later, the war is over and Tokyo has been rebuilt. Like most post-apocalyptic worlds, this one ain’t pretty. The streets are overwhelmed with dissent and crime is rampant. The story follows a wimpy biker punk named Tetsuo and his friend Kaneda, who seems to be the leader of their makeshift motorcycle gang. The two get caught up in a governmental experiment that attempts to harness latent human abilities, and Tetsuo suddenly becomes endowed with psychic powers. I think Justin puts it well when he says: “As we all well know, from studying Carrie, rejected nerds with telekenetic abilities do not use their powers just for cleaning litter on the highways.” Tetsuo goes on a rampage through New Tokyo in an attempt to reach the mysterious Akira. 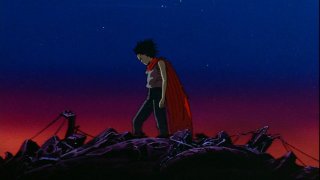 Adapted from a 2,000 page Manga series of the same name, Akira touches on a lot of subjects. As with most adaptations of large bodies of work, there are some scenes or characters that seem out of place and it feels like there is a lot of complexity lurking beneath the surface, especially when it comes to the social and political issues that are only touched on in the film. However, the story works well as a whole. The ending is still a little confusing, but it’s much better than the garbled mess from the original translation. Thematically, the film is obviously alluding to Japan’s relationship with technology, specifically nuclear weapons. There appear to be strong cultural themes in the film that are a little hazy to a westerner like myself, but there is clearly something going on there.

The only issue I had with the story is that the most of the characters are not very likeable. Tetsuo and Kaneda are ostensibly the center of the film, but they’re both self-interested punks and not very sympathetic. I guess you’d call Tetsuo the villain of the movie, so it’s understandable that he’s not likeable, but Kaneda is supposed to be our hero, and he comes off as goofy, ignorant and immature (granted, he is a kid, but his silly comments were often quite jarring). The only characters that show a noble side are the three kids that are part of the government project, but while they play an important role, they’re really only bit characters. However, the film is able to overcome these deficiencies because its vision is sufficiently compelling, and there are plenty of interesting and ambitious ideas to keep the viewer occupied. Action sequences are also well composed and keep the story moving briskly, which helps. 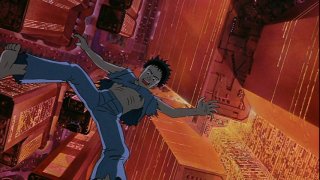 Speaking of vision, this has to be one of the finest examples of animation I’ve ever seen. It is perhaps a little dated, but when you take into account that this movie was made long before modern techniques (like CGI or digital image correction), it really is a remarkable achievement. Filled with vibrant colors and stunning imagery, the film is a rollercoaster ride from start to finish. I’ve included a bunch of screenshots from the film, but it’s worth noting that the animation itself – the actual movement of various elements on screen – is very well done (and can’t be captured in a still). The ambient soundtrack is atmospheric and evokative, with an interesting mixture of instrumentation and electronic music (that doesn’t seem at all dated and indeed, may even have been ahead of its time). Symbolic imagery (for example, Tetsuo’s growing powers are symbolized in a dream by a flood of milk… or towards the end of the movie, when Tetsuo is being consumed by his powers and regressing into a monstrous creature that engulfs everything in sight, his morphing body clearly takes on the shape of a mushroom cloud) is used, but not abused. 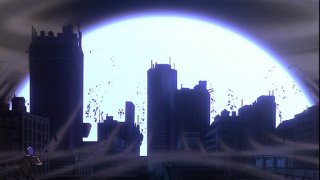 Ultimately, while the kinetic action of the animation and story serves to hold the viewer’s attention, the film isn’t especially involving on an emotional level (I think this is due to the lack of sympathetic characters more than anything else). It does tackle some “big” ideas, but not in a way that will have you questioning life, the universe, and everything. In many ways it is a spectacular experience, and well worth the watch, but it is also a flawed movie. Still, thanks to the restored version, I’ve come to see why it’s considered an “essential” film for anyone interested in Anime (though I’m not sure it would be played on the traditional Otaku holiday known as Anime Day). Three stars (***)

More images and assorted comments below the fold…

When I went to take screenshots from this film, I ended up saving about thirty of them and I had some trouble deciding which ones to include in the review (damn choices!), so I’m putting a bunch of other pics in this extended entry.

While the movie is visually engaging, it rarely seems like they’re really showing off. The below image features one of the few effects that is a bit showy, but they used it sparingly enough that it remained interesting. During a bike chase towards the beginning of the film, the animators used these light trails to emphasise the action. 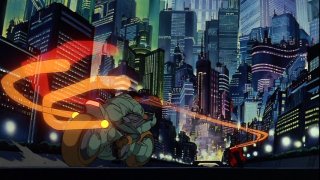 Here’s a shot of Tetsuo using his newfound abilities: 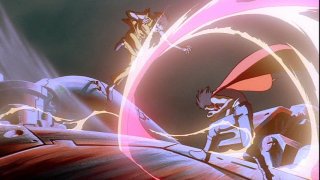 I can’t imagine smoke or fire being an easy thing to animate, yet Akira easily features a dozen different types and shades of billowing smoke and explosions. 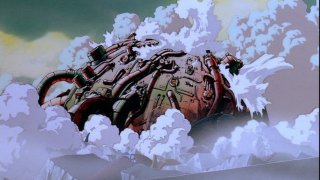 Another shot of Tetsuo, with more fire and smoke: 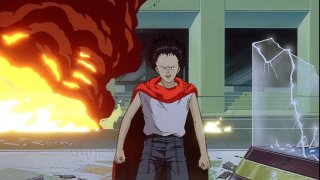 The bikes in the film have an interesting look, even if they are a bit absurd. Here’s a better look at Kaneda’s bike: 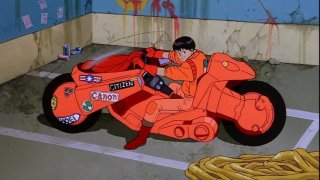 As previously mentioned, the animation and actual movement in the film is handled well, but that doesn’t necessarily translate well to a screenshot. The below screenshot depicts a sequence in which Kaneda faces off against a rival biker while on foot. As the biker approaches, Kaneda jumps and kicks, unseating his foe. It happens in a sort of stylized slow motion, and it’s very well executed (but you wouldn’t know that from the screenshot): 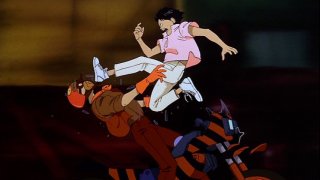 It’s amazing how influential 2001: A Space Odyssey has been in film. Nearly every movie that features some sort of transcendent ending nicks the psychadelic trip scene from the end of 2001 (though most of the thieves have sense enough to keep it brief). The ending of Akira is somewhat ambiguous, and uses a stylized pencil test that morphs into a sort of energy bubble as a voiceover proclaims “I am Tetsuo,” implying that Tetsuo has transcended his physical form and become something new (which symbolizes humanity’s evolution as well): 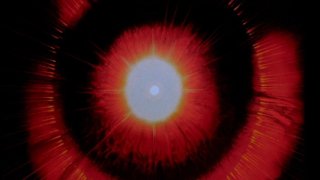 Again, good film, well worth the watch, but it has its flaws (most notably the unsympathetic characters).