One of the things I like about watching foreign movies are the cultural differences that don’t quite make it through (it’s a novelty thing, perhaps). Sometimes this is due to poor translation and sometimes it’s due to a physical mannerism or custom that simply can’t be translated. There is a perfect example of this in Miyazaki’s Spirited Away. Towards the beginning of the film, the main character Chihiro is taken to the boiler room where she meets an old man with several arms who runs the place. At one point, this man puts up his hands in what looks sort of like a football goalpoast gesture and Chihiro pushes her hand through it (alas, I do not have a copy at my hands, so I can’t give a screenshot). I have no idea what this means, but it’s clearly something children in Japan do (I’m not sure how I picked up on this – I think I might have watched the movie with the commentary on at one point, which might actually explain what this means).

Most of the Anime I’ve seen are films, not series. I’ve seen a few Miyazaki movies, and some other movies like Akira and the Cowboy Bebop movie, amongst assorted other stuff. A few months ago, I watched Haibane Renmei because of the enthusiastic recommendations of Steven Den Beste (and pretty much everyone else who has seen it). Their enthusiasm is certainly warranted. Again, my expectations were constantly thwarted, which I think is part of the reason I enjoyed it so much (I’m sure this series will come up again here). I have since moved on to Serial Experiments Lain. I haven’t gotten too far into the series, but one thing that really struck me as funny was Lain’s bear pajamas, which she seems to wear whenever she’s feeling down: 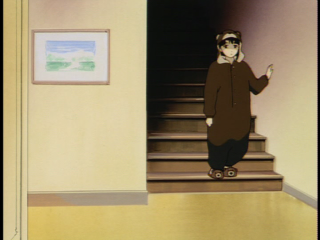 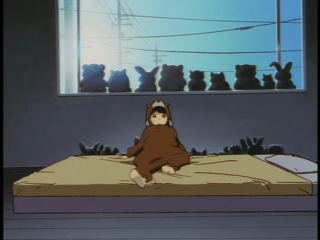 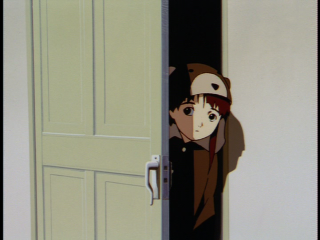 As you can see, it’s adorable (I believe the appropriate word is Kawaii). Now, what I don’t know is if such pajamas are normal garb for young Japanese girls, or if it’s just a quirky Anime trope like washpans that bonk people on the head or Absurdly Powerful Student Councils (not that I’ve seen either of those). Like I said, I haven’t seen much anime, but I’ve fallen into the habit of reading blogs in the Otakusphere, many of whom seem to delight in posting screenshots and I seem to remember some similar type pajama/costume type stuff coming up from time to time. So is this a pseudo-trope, another cultural difference, or is it just an oddity limited to Serial Experiments Lain (one could certainly find symbolic meanings in such a visual)?