We live in a truly wondrous world. The technological advances over just the past 100 years are astounding, but, in their own way, they’re also absurd and even somewhat misleading, especially when you consider how these advances are discovered. More often than not, we stumble onto something profound by dumb luck or by brute force. When you look at how a major technological feat was accomplished, you’d be surprised by how unglamorous it really is. That doesn’t make the discovery any less important or impressive, but we often take the results of such discoveries for granted.

For instance, how was Pi originally calculated? Chris Wenham provides a brief history:

Part of the reason why it was so hard to find the true value of Pi (π) was the lack of a good way to precisely measure a circle’s circumference when your piece of twine would stretch and deform in the process of taking it. When Archimedes tried, he inscribed two polygons in a circle, one fitting inside and the other outside, so he could calculate the average of their boundaries (he calculated ? to be 3.1418). Others found you didn’t necessarily need to draw a circle: Georges Buffon found that if you drew a grid of parallel lines, each 1 unit apart, and dropped a pin on it that was also 1 unit in length, then the probability that the pin would fall across a line was 2/π. In 1901, someone dropped a pin 34080 times and got an average of 3.1415929.

π is an important number and being able to figure out what it is has played a significant factor in the advance of technology. While all of these numbers are pretty much the same (to varying degrees of precision), isn’t it absurd that someone figured out π by dropping 34,000 pins on a grid? We take π for granted today; we don’t have to go about finding the value of π, we just use it in our calculations.

In Quicksilver, Neal Stephenson portrays several experiments performed by some of the greatest minds in history, and many of the things they did struck me as especially unglamorous. Most would point to the dog and bellows scene as a prime example of how unglamorous the unprecedented age of discovery recounted in the book really was (and they’d be right), but I’ll choose something more mundane (page 141 in my edition):

They did it by pulling the thread off of a reel, and stretching it alongside a one-fathom-long rod, and counting off fifty fathoms. One end of the thread, Hooke tied to a heavy brass slug. He set the scale up on the platform that Daniel had improvised over the mouth of the well, and put the slug, along with its long bundle of thread, on the pan. He weighed the slug and thread carefully – a seemingly endless procedure disturbed over and over by light gusts of wind. To get a reliable measurement, they had to devote a couple of hours to setting up a canvas wind-screen. Then Hooke spent another half hour peering at the scale’s needle through a magnifying lens while adding or subtracting bits of gold foil, no heavier than snowflakes. Every change caused the scale to teeter back and forth for several minutes before settling into a new position. Finally, Hooke called out a weight in pounds, ounces, grains, and fractions of grains, and Daniel noted it down. Then Hooke tied the free end of the thread to a little eye he had screwed on the bottom of the pan, and he and Daniel took turns lowering the weight into the well, letting it drop a few inches at a time – if it got to swinging, and scraped against the chalky sides of the hole, it would pick up a bit of extra weight, and ruin the experiment. When all three hundred feet had been let out, Hooke went for a stroll, because the weight was swinging a little bit, and its movements would disturb the scale. Finally, it settled down enough that he could go back to work with his magnifying glass and his tweezers.

And, of course, the experiment was a failure. Why? The scale was not precise enough! The book is filled with similar such experiments, some successful, some not. 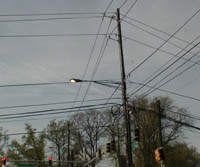 Another example is telephones. Pick one up, enter a few numbers on the keypad and voila! you’re talking to someone halfway across the world. Pretty neat, right? But how does that system work, behind the scenes? Take a look at the photo on the right. This is a typical intersection in a typical American city, and it is absolutely absurd. Look at all those wires! Intersections like that are all over the world, which is the part of the reason I can pick up my phone and talk to someone so far away. One other part of the reason I can do that is that almost everyone has a phone. And yet, this system is perceived to be elegant.

Of course, the telephone system has grown over the years, and what we have now is elegant compared to what we used to have:

The engineers who collectively designed the beginnings of the modern phone system in the 1940’s and 1950’s only had mechanical technologies to work with. Vacuum tubes were too expensive and too unreliable to use in large numbers, so pretty much everything had to be done with physical switches. Their solution to the problem of “direct dial” with the old rotary phones was quite clever, actually, but by modern standards was also terribly crude; it was big, it was loud, it was expensive and used a lot of power and worst of all it didn’t really scale well. (A crossbar is an N� solution.) … The reason the phone system handles the modern load is that the modern telephone switch bears no resemblance whatever to those of 1950’s. Except for things like hard disks, they contain no moving parts, because they’re implemented entirely in digital electronics.

So we’ve managed to get rid of all the moving parts and make things run more smoothly and reliably, but isn’t it still an absurd system? It is, but we don’t really stop to think about it. Why? Because we’ve hidden the vast and complex backend of the phone system behind innocuous looking telephone numbers. All we need to know to use a telephone is how to operate it (i.e. how to punch in numbers) and what number we want to call. Wenham explains, in a different essay:

The numbers seem pretty simple in design, having an area code, exchange code and four digit number. The area code for Manhattan is 212, Queens is 718, Nassau County is 516, Suffolk County is 631 and so-on. Now let’s pretend it’s my job to build the phone routing system for Emergency 911 service in the New York City area, and I have to route incoming calls to the correct police department. At first it seems like I could use the area and exchange codes to figure out where someone’s coming from, but there’s a problem with that: cell phone owners can buy a phone in Manhattan and get a 212 number, and yet use it in Queens. If someone uses their cell phone to report an accident in Queens, then the Manhattan police department will waste precious time transferring the call.

Area codes are also used to determine the billing rate for each call, and this is another way the abstraction leaks. If you use your Manhattan-bought cell phone to call someone ten yards away while vacationing in Los Angeles, you’ll get charged long distance rates even though the call was handled by a local cell tower and local exchange. Try as you might, there is no way to completely abstract the physical nature of the network.

He also mentions cell phones, which are somewhat less absurd than plain old telephones, but when you think about it, all we’ve done with cell phones is abstract the telephone lines. We’re still connecting to a cell tower (which need to be placed with high frequency throughout the world) and from there, a call is often routed through the plain old telephone system. If we could see the RF layer in action, we’d be astounded; it would make the telephone wires look organized and downright pleasant by comparison.

The act of hiding the physical nature of a system behind an abstraction is very common, but it turns out that all major abstractions are leaky. But all leaks in an abstraction, to some degree, are useful.

One of the most glamorous technological advances of the past 50 years was the advent of space travel. Thinking of the heavens is indeed an awe-inspiring and humbling experience, to be sure, but when you start breaking things down to the point where we can put a man in space, things get very dicey indeed. When it comes to space travel, there is no more glamorous a person than the astronaut, but again, how does one become an astronaut? The need to pour through and memorize giant telephone-sized books filled with technical specifications and detailed schematics. Hardly a glamorous proposition.

Steven Den Beste recently wrote a series of articles concerning the critical characteristics of space warships, and it is fascinating reading, but one of the things that struck me about the whole concept was just how unglamorous space battles would be. It sounds like a battle using the weapons and defenses described would be punctuated by long periods of waiting followed by a short burst of activity in which one side was completely disabled. This is, perhaps, the reason so many science fiction movies and books seem to flaunt the rules of physics. As a side note, I think a spectacular film could be made while still obeying the rules of physics, but that is only because we’re so used to the absurd physics defying space battles.

None of this is to say that technological advances aren’t worthwhile or that those who discover new and exciting concepts are somehow not impressive. If anything, I’m more impressed at what we’ve achieved over the years. And yet, since we take these advances for granted, we marginalize the effort that went into their discovery. This is due in part to the necessary abstractions we make to implement various systems. But when abstractions hide the crude underpinnings of technology, we see that technology and its creation as glamorous, thus bestowing honors upon those who make the discovery (perhaps for the wrong reasons). It’s an almost paradoxal cycle. Perhaps because of this, we expect newer discoveries and innovations to somehow be less crude, but we must realize that all of our discoveries are inherently crude.

And while we’ve discovered a lot, it is still crude and could use improvements. Some technologies have stayed the same for thousands of years. Look at toilet paper. For all of our wondrous technological advances, we’re still wiping our ass with a piece of paper. The Japanese have the most advanced toilets in the world, but they’ve still not figured out a way to bypass the simple toilet paper (or, at least, abstract the process). We’ve got our work cut out for us. Luckily, we’re willing to go to absurd lengths to achieve our goals.

5 thoughts on “The Unglamorous March of Technology”