Homebrewing is not a hobby for the impatient, especially when you get a taste for stuff like funky saisons or oak aged beers. My last couple batches have been such beers, so it feels like I haven’t gotten much done lately, though in about a month’s time, I’ll (hopefully) be awash in more homebrew than I know what to do with. I don’t know how curious you are about this stuff, but updates on three batches of beer (two already mentioned, one upcoming) are below. Apologies if this isn’t your bag, but hey, there’s some pretty pictures you can look at too.

First up, Kaedrôme Saison, brewed wayyy back in June, I split the 5 gallon batch into two. Half was bottled in July, the other half was put into secondary and dosed with Brettanomyces, crossing the Rubicon of Funk. The first half, a “regular” saison, is drinking rather well at this point, though I’m running a little low on supply. I brought a bomber to Thanksgiving, and the relatively high carbonation and dry palate were perfect matches for the hearty meal. That second half had been slumbering in secondary for about 4 months, after which I figured it was finally time to bottle it. 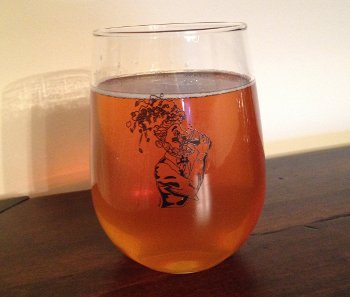 Final Gravity came in at 1.003 (6.2bx), which was a nice decrease from the 1.007 of the “regular” saison. Tasting the uncarbonated stuff, it seemed relatively light on Brett funk, but very dry (as you might expect from gravity readings like that). I was a little worried about bottling this after 4 months in secondary. Would the yeast be up to carbonating this after so long? It turns out that my fears were unfounded. I bottled on 11/16/13, and cracked open a test bottle (that wasn’t quite a full fill) on 11/27/13. It wasn’t perfect, but it had carbonated a bit, and was very drinkable. Again, it’s a little light on the funk for now, but we’ll see how it conditions in the bottle. I plan on bringing this to beer club next week, so we’ll see how it’s doing then.

Now I just need to freak out about all the equipment that touched the Brett. I’m sure I cleaned it all well enough, but it could be a bit nerve wracking because everyone says that Brett is so hardy that it will find a way to survive, like those dinosaurs from Jurassic Park. Life finds a way. You can’t see me as I write this, but I’m Goldbluming right now. It’s sad. Anyway, I’ve ordered up some new tubing and other fittings, so we should be all good. And the old tubing/fittings will be used the next time I feel like making a funky beer (which will probably be sooner rather than later).

Next, that Russian Imperial Stout that I brewed a few weeks ago! I checked the gravity on 11/16/13, about two weeks after brew day, and it was still at 1.034, which was much higher than expected (especially after that super vigorous fermentation over the first few days). I decided to give it another week in primary, and opted to bottle Kaedrôme that day…

On 11/23/13, I transfered to secondary fermenters. Final Gravity was 1.031 (14.1 bx), which is still excessively high, but I figure giving this another three weeks in secondary would bring that down to something manageable. I’m guessing it won’t get down to 1.023, but if I can get it to drop a few points, I’ll be pretty happy with it. As mentioned in the original post, I split the batch into two secondaries, one straight up, the other with bourbon soaked oak cubes. The plan is to eventually bottle some of each, then bottle a blend of the two, yielding 3 total variants. I’m super excited to see how these turn out, but I’m guessing it will need to condition in the bottle for quite some time.

I used Medium Toast American Oak, and soaked it for two weeks in Evan Williams 2003 Single Barrel Bourbon. I boiled the oak for a few minutes up front to sanitize and get rid of some of the harsher tannins, then put them in a mason jar with bourbon. Here’s a pic of when I first put the oak in the bourbon: 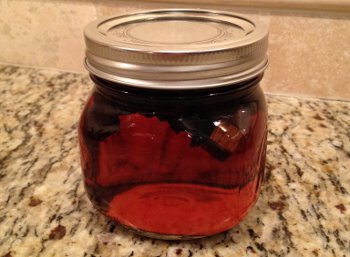 And below is a pic after a few days. Note how much darker the bourbon got. The comparison isn’t super fair because of the cap on the mason jar and the fact that some of the oak was sinking as it got saturated with bourbon (both of which are blocking some of the light and making it seem darker), but even when I hold it up to the light, it’s noticeably darker. That medium toast is doing its thing, I guess. 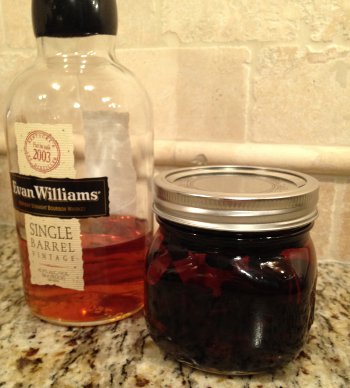 This is shaping up to be my most interesting batch to date. Can’t wait to see how it turns out, and I’m really hoping for great things. Bourbon Barrel Stouts have become a true favorite of mine, so being able to produce something like that myself will be great.

Finally, another mad scientist experiment. I had some cans of Heady Topper left over from Operation Cheddar. Heady is, of course, a damn near perfect DIPA, and while I’m sure their hop charges, sourcing, and selection are superb, I think the thing that really separates Heady from the rest of the world is its yeast strain, the fabled “Conan” yeast that supposedly emphasizes the juicy citrus flavors in the hops. For some ungodly reason, neither Wyeast nor White Labs have cultured this yet (and they don’t have anything comparable*), so I thought I’d harvest the yeast dregs from a couple cans of the stuff and see if I could whip it into shape. 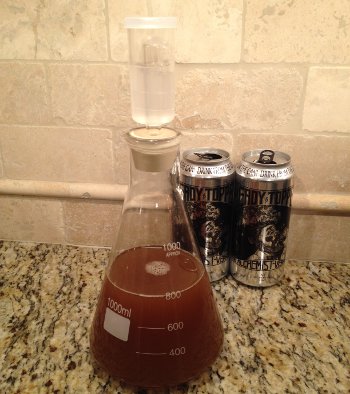 I was a little worried at first, as I saw no signs of activity for at least three days. But before I could properly despair, I started to see some bubbles (it turns out that this delayed start is common amongst those of us nerds who have tried harvesting Heady yeast). Soon, I could see that the yeast had grown, and the fermentation was visible. Score. I’m going to crash it tonight and give it just a teensy bit of extra wort tomorrow night to get it into shape for brew day on Saturday. I’m planning on making a hoppy red beer (planning on Simcoe and Amarillo as the hops, but we’ll see what my local shop has in stock). Wish me luck.

So it’s going to be an interesting few months. If this Conan yeast thing works out, I’ll try using it for the annual Fat Weekend IPA as well. And if the oaked RIS works, I might whip up a barleywine this winter and do the same thing…

* East Coast Yeast makes a Northeast Ale (ECY29) that is rumored to be based on Conan, but it’s hard to come by…