This past Sunday’s episode of Game of Thrones ended with a doozy of a surprise (at least, for those of us who haven’t read the books!), and while we all come to grips with what happened, Joss Whedon is sitting back and laughing. Warning: Many spoilers ahead for Game of Thrones, Buffy, Firefly/Serenity, and probably some other stuff.

The Red Wedding, which is the name given to the sequence whereby several of our Game of Thrones heroes are betrayed and murdered in a brutal fashion, was shocking in its brutality. Whedon saw it from a different perspective though:

Not up on “Thrones” but hear George killed more peeps – can he PLEEZ have my rep now so I can stop hearing about it? #gettingold

Basically, Whedon has a reputation for killing off his most beloved characters on TV shows. George R.R. Martin appears to be giving him a run for his money. Or is he?

I don’t watch Game of Thrones but this “Red Wedding” that people are tweeting about tonight sounds very romantic!

Whedon’s deaths tend to be emotionally powerful, prompting much in the way of hate mail. He defends these deaths in the name of the story. For instance, when Whedon kills off Wash in Serenity, he claims it was because otherwise, we would all assume the success of our heroes would be a foregone conclusion. The death is absolutely infuriating, not least of which because I’m not particularly sure it achieves its aims. It was a shocking moment in the film, but it was so sudden and so damn pointless, that it didn’t really do anything but make me sad. Furthermore, he was killed by faceless Reavers, so it’s not like you have anyone to blame… except for Whedon himself.

Our Kids’ Version of the “Game Of Thrones” Red Wedding is safe for the whole family! bit.ly/11EIcaT

Contrast that with the Red Wedding. Robb Stark (heir to the iron throne), Talisa (his pregnant wife), and Catelyn (his mother) are all betrayed and slaughtered in the cruelest of fashions (their entire army is killed as well). It was sudden, but not nonsensical. And indeed, the sense of dread had been building for a while. For crying out loud, Talisa had just commented that if their unborn child winds up being a boy, they should name him Eddard (after Eddard Stark, who was also betrayed and killed in season 1). Ned friggen Stark!

Again, I was shocked and saddened by this event, but there are a number of things that make this better than Whedon’s brand of murder. First, this is a show with a ton of characters, so there will be plenty of others that will rise up to take Robb’s place. Second, the show has already established the danger of getting too attached to characters. Lots of people died on Sunday, but they’re but the latest in a long line of tragic deaths and betrayals. Third, Martin is an equal opportunity killer. The blood of villains flows as readily as the heroes, which makes for a nice balancing act, and they’re sometimes just a surprising (notable example: Viserys Targaryen, who is “crowned” by Khal Drogo in a fantastic moment). Fourth, while the Red Wedding is the end of characters we like, it’s also the beginning of a villain we’re going to love to hate! The same could be said for the Death of Ned Stark at the hands of Joeffrey (quite possible the most hatable character in television history, who has been built up as such a tremendous douche that his death will have significant cathartic value).

This episode of GoT is so mean-spirited, it’s like Joffrey himself wrote it.

Whedon’s use of deaths seem like cheap shots. As emotionally draining as they are, they’re actually not that frequent… but in a lot of cases, they probably should be. Take Buffy the Vampire Slayer. When Whedon killed fan favorite Tara, it was a mere plot convenience for him. A cheap way to up the stakes (and he needed this, as those nerdy villains were kinda lame). So what’s the problem? Well, if that’s what it takes to die in this show, the non-Buffy characters should have all died in, like, season one. It’s a pointless, lazy death.

In all seriousness, I would pay $20 for a good SNL skit that just reenacted the Red Wedding on various TV shows.

Whedon certainly has his fans and I actually count myself one of them. Indeed, most of his death scenes are well deserved and well done. Even the ones I hate tend to at least be effective. But I’m not really willing to forgive Wash. Just can’t get past that one. So Whedon is right, we should give George R.R. Martin an equivalent reputation for killing his characters (in fact, I think he’s had that reputation for a while, it’s just that we’re finally seeing it on TV). But this isn’t a zero sum game: there’s plenty of blame to go around, Joss! So congratulations: you both have a reputation for killing beloved characters.

Tangentially, are there any characters on Game of Thrones that you would be devastated to see die? And if not, what does that say about the show? Personally, I think that if Aria was killed, I’d be pretty crestfallen. And maybe Hodor, because I love that guy (though I wouldn’t be surprised to see him go). What say you? 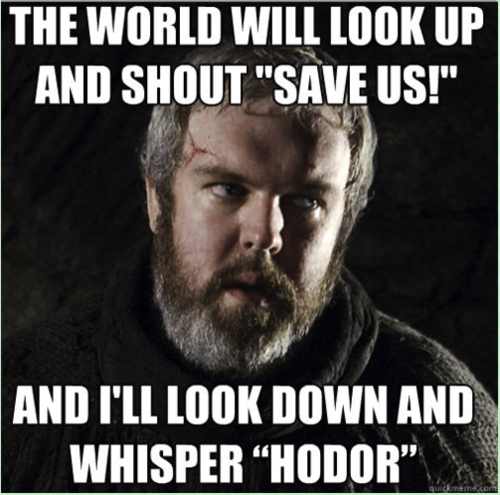 (Thanks to Don for the Hodor meme)