Adam Roberts’ novel Jack Glass presents us with a delicious mashup of pulpy SF and golden-age mystery. I am much more familiar with the former than the latter, but that simple description alone was enough to garner interest, and when this won the British Science Fiction Award for best novel, that just made the choice easier. Having read it, I find it mildy disappointing that this didn’t make the Hugo shortlist, which is amusing to me, since my first exposure to Adam Roberts was his takedown of the 2009 Hugos… But I digress, back to the novel. 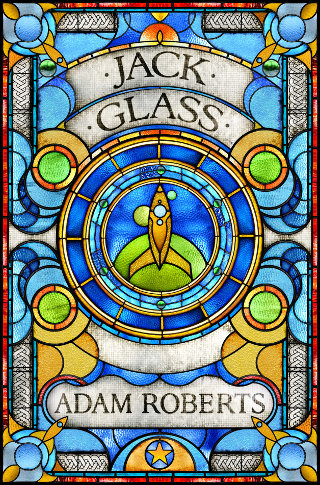 The story is broken up into three chunks, each a mystery that draws upon classic tropes like the locked-room mystery or country house murder. We’re informed early on that the titular Jack Glass is the murderer in all instances, so these mysteries don’t really take on the typical whodunit form… it’s perhaps more accurate to see them as a howdunit. Each story contains elements of the other – all have some element of a locked-room mystery, for instance – and each story leads into the next smoothly enough. Again, I’m not particularly familiar with golden-age mystery stories, but these are archetypes we’ve seen many times before. Many have claimed it’s also a pastiche of golden-age SF, and that’s true to a point, though I find it to be towards the end of that hallowed era. I found it reminiscent of stories like The Space Merchants or The Stars My Destination, more like the output of the Futurians than, say, Campbell’s stable.

The first section is a prison story, and a rather grim one at that. Roberts does an exceptional job establishing the characters and the setting, an impressive feat considering that there are 7 main characters in this story. The science fictional twist on your average prison story is that this prison is an asteroid. 7 prisoners are dropped off on the asteroid and given minimal supplies and a tiny habitable bubble. If they can survive for 11 years under those conditions, they can go free. Of course, in order to survive, they have to excavate the rock, find water, build out a whole tunnel system, etc… Theoretically, whether the prisoners survive the ordeal or not, the company that imprisoned them is left with an asteroid that can be sold as a dwelling to someone. Escape is impossible, as they’re surrounded on all sides by millions of miles of the nothingness of space – like an Alcatraz in space. It’s a clever spin on an old story, and Roberts does a great job setting the stakes. Roberts makes deft work of establishing the 7 main characters – 3 typical alpha males, 2 quasi-alphas, 1 doomed and whiny fat dude, and a cripple (which, actually, isn’t as big a deal in zero-gravity). This isn’t a pleasant story, and the ending is rather far-fetched, but it’s a good way of establishing the world this book is set in…

The second section is the country house murder mystery, and this one is told mostly from the perspective of Diana and her sister Eva. They are the daughters of a clan of information gatherers, rather highly placed in the hierarchy of the solar system. One of their servants winds up dead, and Diana, who is a big mystery buff, seeks to find out who did it. When she is informed that it was, in fact, the notorious murderer Jack Glass, she is mightily confused about how he could possibly have achieved that. When rumors that someone has discovered Faster Than Light (FTL) travel appear, things start to get even more hairy for our protagonists.

I was not quite sure what to make of this section for a while. Diana and Eva aren’t immediately the most likable characters, though they eventually grow on you. They’re both genetically optimized to solve problems. Eva is more into hard sciences and physics, while Diana is more personable. They both seem to have been bred to leverage sleep and dreams to solve their problems, which makes perfect sense, but which I always find a bit annoying because I don’t like the untethered nature of prose that describes dreams. This is more my failing than Roberts, though, so take that with a grain of salt.

The third story is a straight up whodunit murder, except that we know that Jack Glass did it. That being said, we have no idea how he did it, and despite there being multiple witnesses and a confined space (another locked room, it seems), no one saw him do it. Confused? Good!

Along the way we’ve got some interesting speculations on FTL, a clever (if distressing) explanation of the Fermi Paradox, and even some speculation on “Champagne Supernovae” (as Roberts notes in his acknowledgements “‘Champagne Supernovae’ are a real phenomenon, one that puzzles real astrophysicists, and which are, I’m sorry to say, really named after the Oasis song.”) All of this science is covered in plain language and is easily understood while still being clever and intriguing. Roberts clearly gleans the notion that science fiction is a literature of “ideas” and manages to infuse a few surprises into those old hoary tropes like FTL.

All in all, it’s a very enjoyable book. A little grim at times, it’s nonetheless very well constructed, well written, and clever. And if you’re the type to judge a book by its cover, you’ll still be in for a treat, as the cover art is fantastic. If any of this sounds interesting, this is most certainly a worthwhile read…