Dennis Cozzalio of the Sergio Leone and the Infield Fly Rule blog has posted another of his famous movie quizes, and as always, I’m chomping at the bit to provide my answers. Previous installments answering questions from Professor Hubert Farnsworth, David Huxley, Professor Fate, Professor Russell Johnson, Dr. Smith, Professor Peabody, Professor Severus Snape, Professor Ed Avery, Dr. Anton Phibes, Sister Clodagh, and Professor Arthur Chipping are also available… This time around, Miss Jean Brodie has concocted “a genuine corker of a questionnaire which is sure to divide allegiances and facilitate shocking betrayals of confidence over accusations of cheating and excessive IMDb referencing, even if you’re taking the test alone.” A curious assertion, seeing as though Miss Brodie herself has cheated by including several questions recycled from previous quizzes (marked with an asterisk). Well regardless, let’s sharpen those #2s and start cheating:

1) The classic movie moment everyone loves except me is:

The challenge with this question is that it’s tough not to just pick a classic movie I don’t love and pass that off as a “moment”… so yeah, I’m not a big fan of Easy Rider, except, you know, the classic scenes where they’re motorcycling past gorgeous landscapes, set to awesome classic rock music. I actually do love those sequences, even if I don’t love the movie. Looking at other responses, it seems that When Harry Met Sally… is not faring so well, but I think that scene is fine. So I’ll choose something from a film I really do like, in a sequence that is expertly framed and staged: the crop-duster sequence from North by Northwest. Like I said, it’s well done and visually arresting, but at the same time, why would anyone think that this is the best way to attack someone? It’s one of those engineer’s disease things where I get taken out of the movie as I try to figure out logistics of what’s going on. A failing that lies squarely on my shoulders, not Hitchcock’s, but that’s the best answer I can give for this one. 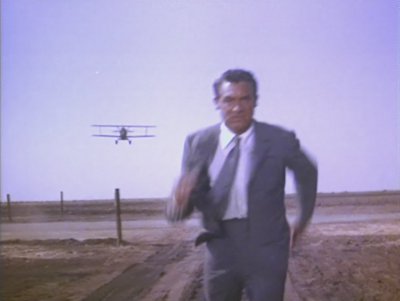 2) Favorite line of dialogue from a film noir

Well, I’ve only seen two, and since I love Harold and Maude, it looks like The Last Detail takes this one by default. However, I should really get off my arse and see Being There sometime.

4) Describe the moment when you first realized movies were directed as opposed to simply pieced together anonymously. *

I honestly can’t think of a specific moment in which this happened. I guess it was a sorta slow revelation. I can’t even really remember when it was that I sorta developed my own personal auteur theory, which, to be sure, was not particularly well considered. It was really just a realization that the director attached to a project was a more reliable indicator of quality than the actors, purely based on being burned by great casts in bad movies (which, come to think of it, was also realization that dawned slowly, over the course of years, to the point where pinpointing a moment seems impossible).

Given that I read a lot, I’m a little surprised at how little I read about film. My default answer would have to be Understanding Movies by Louis Giannetti. My copy is the 8th edition, but I think it’s up to the 12th or so now. It was the textbook we used when I managed to take a film course in college (despite having almost nonexistent electives) and it provided me with a nice toolbox for film analysis…

Vonetta McGee, mostly because of her work in one of my favorite bad movies: The Eiger Sanction. From memory, her character’s name is Jemima Brown and she thinks Clint Eastwood can “broil a mean steak.” She actually doesn’t have that big of a role in the movie, but for some reason, I found her memorable.

I feel like I’ve kept up with everything that I’ve wanted to keep up with. The gaps tend to be things that have never really moved me. Stuff like Mumblecore or contemporary Iranian cinema (or similarly obscure foreign groupings of films that aren’t Asian). I’ve seen some of this stuff, but I don’t really have any desire to check out more, especially since the gaps in my viewing from films made before the last 10 years are so much greater!

8) Favorite line of dialogue from a comedy

You’ve got to be kidding me. Way to narrow it down, Miss Brodie! I’ll just give the first thing that came to mind, which is Dan Aykroyd’s perfect delivery of “Listen… do you smell something?” in Ghostbusters. Unfortunately, that’s probably not even my favorite line in that movie, let alone all comedies.

Dude has 130 director credits in IMDB, and I don’t think I’ve seen any of them. Call this one a mulligan.

Richard Burton, because I actually know who he is and have seen him in movies and stuff.

11) Is there a movie you staunchly refuse to consider seeing? If so, why?

There are tons of movies I don’t particularly want to see, but that’s not really a staunch refusal, and I’d probably watch anything once, if properly motivated.

It’s funny, I didn’t even consider the director/actor collaborations that everyone answers for this one. My mind went immediately to Quentin Tarantino and Robert Rodriguez, who collaborated on Grindhouse and Sin City (and probably others). For director/actor combos, I’d go with something like John Woo and Chow Yun Fat, or the obvious Scorsese and De Niro. 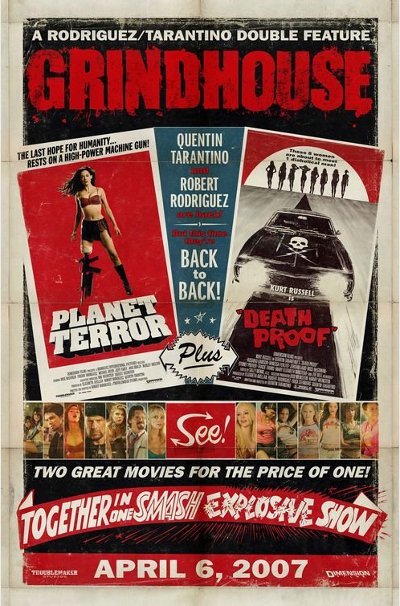 13) Most recently viewed movie on DVD/Blu-ray/theatrical?

On DVD, it was Devil in a Blue Dress, which was very good. On streaming, it was Side by Side, an interesting documentary where Keanu Reeves (!?) interviews filmmakers about the rise of digital filmmaking (and the fall of photochemical film). Definitely worth a watch. And in theaters, sheesh, it was A Good Day to Die Hard, which I suppose was entertaining enough, but didn’t really do that much for me.

14) Favorite line of dialogue from a horror movie

Another impossible question, though this seems more manageable. The first thing that came to mind was Psycho, but even there, I’ve got two: “A boy’s best friend is his mother.” and “We all go a little mad sometimes.” Some good ones in Halloween too: “It’s Halloween, everyone’s entitled to one good scare.” and Dr. Loomis’ ravings about Michael Myers: “I met this six-year-old child, with this blank, pale, emotionless face and, the blackest eyes… the *devil’s* eyes. I spent eight years trying to reach him, and then another seven trying to keep him locked up because I realized what was living behind that boy’s eyes was purely and simply… *evil*.”

A tough one, since I have a clear favorite (JFK), but the rest are all sorta on the same level. I’ll say Platoon as a second favorite.

I have to admit that neither filmography does much for me, but despite One Million Years B.C., I’ll have to go with Eva Mendes, who still shows some promise…

Hay, you asked the same question twice! Take your pick: Is film criticism/culture dead? Let’s rank Pixar’s films! Is X film sexist/racist/whateverist? Is Ferris Bueller a projection of Cameron’s, ala Fight Club? (Good call with that last one, Jeff Gee, thx) Here’s a quiz consisting of 31 questions about film, you should totally answer them. And so on.

Wow, two people I know and like about equally. Granted, I haven’t seen more than a few movies from either actor (despite their lengthy filmographies), but I’ll go with the coin toss winner here, Robert Ryan.

21) Favorite line of dialogue from a western

In Once Upon a Time in the West, three men confront Harmonica, who asks if they brought him a horse. The leader, clearly planning to kill Harmonica, sez that it “…looks like we’re shy one horse.” To which, Harmonica replies: “You brought two too many.”, then proceeds to shoot down all three, then take one of the horses. There are some others (“When you have to shoot, shoot. Don’t talk.”), but I’ll leave it at that.

Yep, it looks like I need to take another mulligan here.

Last year’s hyperactive Detention merits a mention here, as it is certainly one of the most underseen films that I think would be popular if only people knew it existed. On the other hand, it is a reallly weird movie and probably has limited mainstream appeal. But I love it.

Well, here’s the thing, I don’t think either of these guys are particularly great at picking projects to work on. They can be great at times, but they’re both in a lot of crap too. And I mean a lot of crap. Ewan McGregor might have a slight edge at this point, I guess, and he usually manages to be good, even in bad movies (see: Star Wars prequels)

25) Is there such a thing as a perfect movie?

In terms of objective evaluation, probably not. Fortunately, no one is even capable of objectively evaluating a movie (at least, not in a meaningful way). But then you get into the morass of subjectivity, and it becomes difficult to pick out what’s perfect. Perfect movies are like love. It may not be perfect for everyone, but it’s perfect for me at that particular time, and things that I’d hate in any other person/movie, I’m willing to tolerate… nay, love in some others. So yeah, that makes sense, right?

Well, this is lame, but I’ll have to give the same answer as last time: 30th Street Station in Philadelphia, most recently seen in Blow Out. Oh, oh, wait, the Llanerch Diner from Silver Linings Playbook. Technically, I haven’t eaten there recently, but I’ve driven by it since seeing the movie…

Nope, never seen any of his movies. I had 3:10 to Yuma on my DVR at one point, but then my DVD pooped out and I had to replace it. So close, yet so far away.

28) Name the one DVD commentary you wish you could hear that, for whatever reason, doesn’t actually exist *

Tons of options here. Orson Welles seems like he would be fascinating. Certain contemporary filmmakers, for whatever reason, don’t do commentaries for their own films, like The Coen Brothers (who have done a couple, but not most), Quentin Tarantino, and Christopher Nolan. So let’s get the four of them together in a room and have them do a commentary for… well, any movie, really, but let’s say Pulp Fiction, just for the yuks.

Can’t say as though I’m overly familiar with either, though I have seen movies by both. I’ll go with Marie Windsor, for The Killing…

There are a depressing number of answers to this question. M. Night Shymalan is an obvious one. Richard Kelly is another, though I did enjoy The Box more than most and he’s still young enough that he could emerge big time.

31) Is there a movie-based disagreement serious enough that it might cause you to reevaluate the basis of a romantic relationship or a friendship? *

I can’t say as though there is. I value differences of opinion and if we all liked the same exact stuff, life would be rather boring. I don’t get the internet fanboyistic tendency to harass people who hold different opinions about movies, games, etc… I’m sure there would be stuff that a friend (romantic or not) likes that would give me pause if I found out at a certain crucial period of our friendship, but then, I probably have the same sort of weird taste for something too. I mean, come on, did you see above where I said I liked The Eiger Sanction?

* a classic or, if you must, recycled question from quizzes past that Miss Brodie thought might be interesting to revisit

And that’s all for now. As always, it was a blast coming up with answers for this one…