After two weeks in the bucket, I bottled the Fat Weekend IPA today. Fermentation seemed to as well as usual. A week into the process, once fermentation had slowed considerably, I cracked the lid and dropped in an ounce of Simcoe hops. This is only the second time I’ve dry hopped a batch of beer, but hot damn, judging from the smells emanating from the bucket during bottling, I’m in for a fantastic little brew here. Last time, I got a huge grapefruit character, this time, I got a more well rounded fruitiness as well as a piney aspect that was very pleasant.

Final Gravity: 1.014, which is just about dead on what I was expecting. That being said, I also still seem to have trouble reading my refractometer. Comparing an actual hydrometer reading, I get something lower (around 1.012). The refractometer is showing something around 9.3 bx, which translates to around 1.016. I need to get better at this. Regardless, it’s looking like I’m somewhere on the order of 7.3% to 7.6% ABV, which is close to what I’m shooting for, so all will be well. 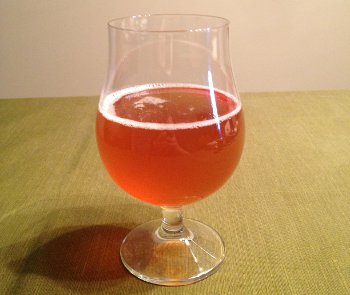 Very pretty looking beer, a nice warm golden orange color, perhaps a hint darker than my last batch of IPA. As already mentioned, the aroma is fantastic, citrusy fruit and pine all over. I gave it a taste too, and I do believe this is going to be fantastic stuff. I got almost exactly 1 full case of beer out of this batch (2.5-3 gallons), which will be perfect. Though only half of what I normally make, I’ve found that hoppy beers don’t last, and start to fade quickly. After 6 months, my last IPA was still good, but it was a bit of a malt bomb. This is something I’ve become more sensitive to as my palate evolves, so I’m glad I’ll probably finish this case off before it has a chance to fade significantly. Fat Weekend is about a month out, which means that this should be fully conditioned and indeed peaking right about then.

Not sure what’s going to come next here. I’ve been toying with the idea of an imperial red ale, but may also try a batch of barleywine or imperial stout too (and perhaps finally take the secondary fermentation plunge, complete with bourbon soaked oak cubes). Whatever the next batch is, I’ll probably start it in March/April. If I end up going the big beer route, I’ll definitely be spending more time conditioning the beer than usual, so it will hopefully be doing really well by next Autumn… But I definitely want to make a sessionable Summer saison, akin to my last saison attempt, but a little lighter. I’ll plan for that in April/May, and that should last me through the summer…