Charles, 2nd Earl Grey was prime minister of the UK for four years, backing significant reform of the British government (in particular, he architected a redistribution of seats in the House of Commons and an expansion of the right to vote). How he came to lend his name to the famous bergamot-flavored tea is mildly mysterious. Like a lot of historical beer origins, there appear to be a lot of apocryphal tales surrounding Earl Grey tea, usually involving a recipe made by a Chinese mandarin. In some accounts, the mandarin is grateful to Lord Grey because one of his men saved the mandarin’s son from drowning. The story that seems more likely to me is that the recipe was specifically formulated to suit the water at Grey’s estate. The bergamot apparently offset the lime present in the water there and when Lady Grey used it to entertain guests in London as a political hostess, it became popular enough that Twinings sought to make it a brand. Or something. But enough about stuffy British politicians, let’s get to the beer!

Bottling of my Earl Grey bitter commenced after two weeks in the fermenter. From observation of the airlock, fermentation seemed to go well for the first two days, but then it dropped off considerably. Given the low original gravity, this was not too surprising, but I gave it the full two weeks anyway. 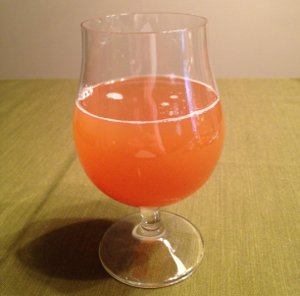 The beer turned out to be a little lighter in color than I was expecting (which is not a big deal or anything), but the aroma was quite nice. A lot of citrus in the nose, which is exactly what I was going after. However, I’m not entirely sure how much of that came from the bergamot tea I used in the recipe. I had also used a small amount of orange peel, which certainly contributed something to the flavor, and it’s also worth noting that Fuggle hops (even when used in bittering applications like I did) can contribute a soft, fruity aroma/flavor to the beer. I suppose one could call this more of a variant on Earl Grey than anything else – something more like Lady Grey tea, which also has orange (among a few other ingredients). Well, whatever the case, it seems like it will be quite an interesting beer.

Final Gravity came in at around 1.010, and according to my calculations, this works out to around 4% ABV (maybe a little more), which was pretty much the target (a little over 75% attenuation, which is pretty good). I had a bit of a worry when I first took my refractometer reading, as it came in at around 5.4°Bx, but it seems that Final Brix is a bit misleading because the alcohol distorts the readings a bit. With the help of the internets, I was able to correct for that distortion, and all seemed well. I also took a hydrometer reading, which came out a little lower than reported above, thus the beer might be slightly stronger than expected (but still around 4.5% ABV).

Another point of interest is that I primed the beer with around 2.5 oz. corn sugar, about half the normal dose. The style is typically not very highly carbonated, so I didn’t want to overdo the priming sugar. Hopefully this will work out to create something with enough carbonation, but still smooth and quaffable. The beer actually tasted ok right now, even in its relatively flat form, so I think a minimum of carbonation would suit this nicely.

That about covers this beer. It’s been an interesting exercise and I can’t wait to taste the final product in a couple weeks. Next up will be a Belgian-style dubbel, though I’m not entirely sure when I’ll get to that and we’re starting to get to the warmer months of the year, where fermentation temperature will get more difficult to control…

(Cross posted on Kaedrin Beer Blog and Tempest in a Teacup)