When I finished my latest homebrew attempt, a stout, I was a little worried that the yeast would have trouble getting started. I had activated the smack pack early in the day, and it did expand a bit, but not to the extent that my previous attempts had. Fortunately, I saw activity in the airlock within about 12 hours, which is better than I was expecting. Indeed, about a day and a half later, it was bubbling furiously. It may have been the most active I’ve ever seen the airlock. Of course, it cut out a couple days later, and by the Wednesday after brew day, it had slowed considerably. I probably could have bottled this a few days ago, but I waited for the weekend, just to be sure. So as hurricane Irene made it’s way up to my area, I was hunkered down inside, bottling my beer.

Final gravity was a little on the high side – around 1.019 or so (maybe a bit higher, adjusting for temperature). My target was around 1.017, so this was probably close enough and will probably contribute a fuller body, which might actually be a good thing here, as I prefer full bodied stouts. From the aroma and taste, it may be a bit more roasty than I was hoping for, but we’ll see how the bottle conditioning affects things. It tastes good, but extrapolating how it will taste after conditioning is something I haven’t really figured out just yet. That being said, I think the bitterness turned out quite well. I was a little worried that the small amount of hops wouldn’t be enough, but they either were, or the natural bitterness from the dark grains is also pitching in… Anyway, given the starting gravity of 1.062-1.063 or so, this should wind up at around 5.5-6% ABV. A little lower than my goal, but given the fuller body I’m expecting, I think it will work out fine.

The appearance was very nice indeed, though I’m really curious as to what the head will look like in the final product. Stouts usually have a relatively dark head, tan or light brown in color. But I’m wondering if my use of light DME as the base will lighten the color. From the picture, you can see a little of the head, and it does seem darker than normal. I guess we’ll find out. The color of the beer is a really nice dark brown color (almost black) with some lighter brown highlights. Holding up to the light, I can’t see through it at all, and the highlights are minimal. 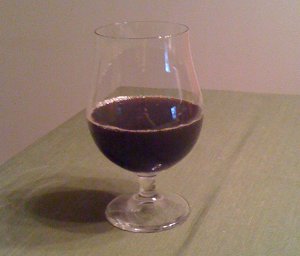 When I bottled my saison, I tried one a week later, and it was fantastic, so I’ll probably be trying this next week, hopefully with similar results!

I think I’ll be going for a Belgian-style Abbey Dubbel for my next batch. It’s one of my favorite styles, so I’m going to need to make sure my recipe is good here. I found a nice clone recipe of St. Bernardus 8 that might provide a good base to work from. But given my schedule for the next couple months, I probably won’t get to brew again until October, so I’ve got time. Not sure what I’ll try after that. Perhaps an IPA of some kind. I should probably try to take advantage of the cooler temperatures inside the house during winter, which means I did things kinda backwards this past year (I brewed a Belgian tripel in winter – using a yeast that requires high temperatures, then I went and brewed this stout in summer, which requires lower temperatures). I may also be upgrading my equipment a little for these future batches. I think I’ve established that I really enjoy this little hobby, so some new toys are probably worthwhile…