Looking at my collection, I can narrow this down to when I started playing Grand Theft Auto 4. I think there were several factors that kept me from getting into that game. Of course, one is a standard complaint this generation, which is the way missions are structured from a usability perspective (i.e. if you fail a mission, you have to retrace several steps before you can even retry). I realize that this was one of the first games of this generation and they’ve apparently implemented a checkpoint system in the DLC (which I don’t have), so I guess I can cut it some slack in that respect, but that doesn’t make it fun to play. However, the biggest problems I had with the game are things that are endemic to a lot of video game sequels.

When you start the game, you’ve got very little in the way of weaponry and it takes you a while to get to an even reasonably powerful weapon. Your access to the city is very limited, as are the cars you can steal. Now, starting small and earning more powerful weapons is a time-honored video game tradition, as is the expansion of access as you gain more power. But is it really necessary for GTA 4? In most respects, this game is the same as GTA 3 (this is, in itself, another problem, though not one I’m going to focus much on in this post), which was made almost a decade ago at this point (of course, GTA 4 was made a few years ago, but still). Though you can’t tell from the numbering, there have actually been several games between those two mentioned. And every one of them starts you off with limited weapons and limited access to the city. Is that really necessary?

It’s a tricky problem though. Someone who’s new to the series might very well appreciate the slow approach. There are a lot of mechanics to master in the game, so jumping right in might be overwhelming to a new player. But for long-time fans of the series, it can be excruciating to go through the paces yet again. This is most certainly not a problem that is limited to the GTA series.

One particularly egregious example is in the God of War series. The protagonist of the series, Kratos, has these nifty blades that are attached to chains, allowing him to swing them around in many acrobatic maneuvers. In the first game, they’re called the “Blades of Chaos”. Towards the beginning of GoW II, you get an “upgrade” to the “Blades of Athena”. Despite being nearly identical in appearance and functionality, you suddenly forget all of the advanced attacks you had learned on the “Blades of Chaos”. Really? So Kratos gets a pair of identical blades, but now he forgets how to spin around with them (I believe this move is called the “Cyclone of Chaos”)? And starting the player off with all the powers from the previous game, only to take them away because of a lame plot point? That’s not cool. The same thing happens at the beginning of GoW III.

Other recent sequels I’ve played recently have similar starts. In Uncharted 2, you start with melee attacks and freakin dart guns. You don’t get a proper pistol until at least an hour or two into the game (and that’s not exactly a powerful weapon either). This is apparently a longstanding issue. David Wong wrote about this years ago, giving one great example from Half Life 2: 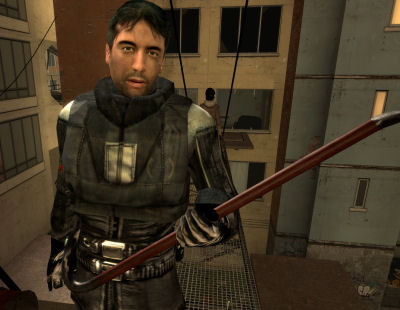 “Gordon, the whole world has been taken over by a race of malevolent aliens. All of humanity is depending on you. Here’s a goddamned crowbar.”

As Wong notes in his article, it’s nice that “earning bigger, fancier weapons is a reward to keep us playing. But don’t make us start with a weapon we probably have in our real-life garage (hey, thanks for the wrench, Bioshock).” Now, Wong was making a general point about underpowered starting weapons… but it becomes doubly annoying when you’re playing a sequel to a game and you have to start back at the beginning again.

Again, this is a bit of a challenge for game developers, since they don’t always have the luxury of assuming that everyone played the previous installment (indeed, their goal is to expand the market and sell more than the previous game, so they have to plan for that possibility). I recently picked up Ratchet & Clank Future: Tools of Destruction and haven’t had any problems… but that’s probably only because this is my first Ratchet and Clank game. I’m sure fans of the series were a bit annoyed at starting the game with limited weaponry, and I’m sure that if I pick up A Crack in Time, I’ll it will suffer from the typical sequel problems…

The most obvious solution is to allow existing players to skip forward somehow. In the case of GTA IV, that means making more of the island available right away, as well as letting you pick up more powerful weaponry and nicer cars. For Ratchet and Clank, it means having more weapons available right from the start. The problem with this solution is that the developer either has to code two introductory sections of the game, or they have to make sure the game is well balanced for both the experienced and new player (this is probably a lot more difficult than it sounds). For an open ended game like GTA IV, that is probably more feasible than for a more cutscene and story-oriented game, like Uncharted 2. That being said, if it’s a sequel, one would assume that the game is popular enough to warrant the extra expenditure.

One thing that might be interesting is to tie this into Trophies/Achievements. If the system can see that you’ve played the previous game, perhaps you automatically load the player into the experienced track. Of course, that assumes that the sequel is on a game from the current generation (of the games mentioned in this post, the only one that really qualifies is Uncharted 2, though you could make a case for God of War, since they released an upconverted version of the last-generation games on the PS3)

The only game I’ve played recently that got this right was Call of Duty: Black Ops, where you get a pretty great weapon right from the start. But then, I haven’t played the multi-player yet, and I’m sure you have to start at the bottom there…

Apparently there are some games that try to tie your decisions from the first game into the sequels. Mass Effect 2 was supposed to do that, but I get the impression that it wasn’t as big a deal as some were expecting. Of course, the first game isn’t even available on the PS3 (and my computer is too old to go that route), so I’ll be starting ME2 as a new player… but then, Mass Effect 3 is supposed to carry those same decisions on as well, so I guess we’ll find out. In any case, I find that concept encouraging, even if I haven’t actually played it yet. In the end, I don’t think every game will be able to get that far, if only because some games won’t have the luxury of planning for a sequel ahead of time. But there might be some simpler things you can do to mitigate the issue, and I hope more developers get creative in that respect.