Good news everybody! Dennis Cozzalio of the Sergio Leone and the Infield Fly Rule blog has posted another of his famous movie quizes, and as always, I’m excited to provide my answers. Previous installments answering questions from David Huxley, Professor Fate, Professor Russell Johnson, Dr. Smith, Professor Peabody, and Professor Severus Snape are also available… But now, here are my answers to Professor Farnsworth:

Well, I’m still catching up on a lot of 2010 releases and I’m terrible at picking favorites, but as of right now, I’ll have to go with the relatively boring choice of The Social Network or Inception. Nevertheless, those are the two movies I connected with the most this year.

These days I find it hard to separate the “fugitive child rapist” part from the “great filmmaker” part of Polanski, but I guess I’ll have to go with Rosemary’s Baby as my second favorite.

Well, they both make some rather craptacular films, but Statham seems to actually have a few really good films to his credit. Plus, I hate professional wrestling.

4) Favorite movie that could be classified as a genre hybrid

I thought this would be a lot harder, but the answer came pretty quickly: Alien. The two most prominent genres being blended here are science fiction and horror, and it’s a superb example of both genres.

5) How important is foreknowledge of a film’s production history? Should it factor into one’s reaction to a film?

I’ve been thinking a lot about film critics lately. In particular, the age old question of why critics like different movies than mainstream audiences. Without going into too much detail, I think the primary differentiator is the knowledge and appreciation of context. For instance, in order to truly enjoy a movie made a hundred years ago, you have to have some knowledge of what it was like to live back then and also be aware of the limitations of film at the time, and so on. Indeed, it might even be worthwhile to look into what effects the film had on society at large. I suppose someone without that cultural and historical context can still enjoy the film, but not as deeply as someone who has studied all those external factors. Now, “foreknowledge of a film’s production history” is but a narrow part of a film’s context, but it’s certainly relevant. Whether or not it “should” factor into one’s reaction is almost irrelevant. All of one’s knowledge factors into one’s reaction to a film. What one should do, however, is be aware of this fact. Context is not limited to the direct knowledge of the film itself, but all knowledge. One of the reasons people enjoy rewatching movies is that while the movies don’t change, we do, and so rewatching a film involves incorporating new knowledge and perspectives, which can still be illuminating. So I’d say it’s important, that it should factor into one’s reaction, and that as long as one acknowledges their perspective, it’s probably a good thing.

Not particularly familiar with the pairings, but Cary Grant & Irene Dunne, because I said so.

My first instinct is James Franco for 127 Hours. However, a few others popped into my head: Christian Bale in The Fighter, Jesse Eisenberg and Justin Timberlake in The Social Network, and maybe a few others. Also, I haven’t seen a few films with contenders, like The King’s Speech. But I’ll stick with my instinct on this one for now.

I think the aforementioned recognition of the role and importance of context in our reactions to movies is a big one. A lot of our reactions to films are colored more by context than I think we care to admit. Luckily, acknowledging that is the first step towards getting a more complete understanding of film.

In theaters, it was True Grit, which was great. I was a little worried about Jeff Bridges’ voice in the trailer. Something sounded so off, so manufactured about it. But in the context of the film, it was fine. And the Coens, as usual, are fantastic at this whole moviemaking thing.

On Blu-Ray, it was Easy A, which was breezy, clever, and fun. Much better than expected!

On DVD, it was Silent Night, Bloody Night. Among the not-so-crowded holiday horror sub-genre, it’s near the top, though I think it’s also a bit overrated.

Also, I think it’s time to add a new option to the list: Netflix Watch Instantly (or, at least, streaming). I’ll go first, the last thing I saw on Netflix streaming was Joan Rivers: A Piece of Work, an interesting look at someone I never thought much about (despite the fact that she’s impacted my professional life in some ways).

I don’t think he necessarily deserves punishment, but the ironic thing to do would be to make him the middle piece, if you know what I mean.

This is a difficult question because the reason “almost no one else has had the chance to see” something is that it didn’t get a very wide release and/or isn’t available on DVD. Unfortunately, that’s almost as likely to affect me as it is anyone else! However, there are a few movies I’ve seen that might qualify. The first one that came to mind was Playing Columbine, a documentary about video games and their impact on society. I was really taken with this movie when I saw it at the Philadelphia Film Festival a few years ago, but it never really got a release and its DVD is not widely available (it’s not even available on Netflix, though you can buy one for $35 from their website), so “almost no one else has had the chance to see” it. I don’t know that it’s worth the price of the DVD, but if you get a chance to see it and you like video games (heck, even if you don’t), it’s well worth watching. 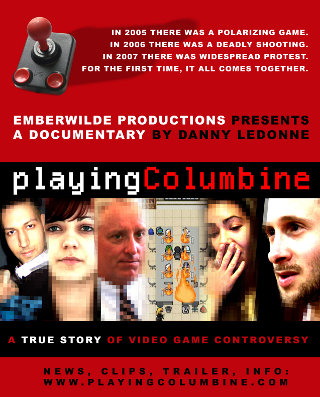 Angie Dickinson, because, come on, Rio Bravo. Then again, Sheree North is Babs Kramer. But Dickinson.

Though it certainly didn’t happen the way it was portrayed on screen, I’ll go with Adaptation. If you require something more traditional, I guess you’d have to go with Almost Famous.

I’m finding this one extremely difficult to answer. The first thing I thought of was the recent spate of Boston-set films that seem to portray the gritty underbelly of the town… but then, I’ve only been to Boston a few times and I’m certainly not up to speed on their criminal undergrounds. Next, I thought of 127 Hours because I saw that recently and it also has a very well established sense of space and location. I felt like I knew the geography of the area despite never having been there before. I don’t think any of those are really good answers to this question, but that’s what I came up with.

Given my choice for best movie, the obvious answer would be David Fincher. The Coen Brothers probably deserve some consideration as well as a few others, but Fincher seems to take the cake.

Hmmm, well, I guess it would have to be There’s Something About Mary, though I do have a soft spot for Kingpin.

I go back and forth between the two classics: It’s a Wonderful Life and Miracle on 34th Street. If forced to choose, I guess I’d go with Capra’s masterpiece, but again, they’re both classics.

The first actress that came to mind was Noomi Rapace for her performances in the Millenium trilogy movies from Sweden, but then Natalie Portman was also great in Black Swan, as was Jennifer Lawrence in Winter’s Bone. Heck, maybe even Emma Stone in Easy A. But as with the actors, I’ll stick with my instinct on this one… 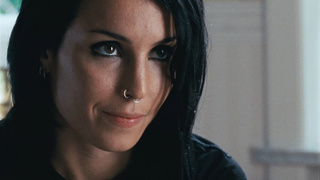 At first, I thought: how could this not be Joe Don Baker. But when I look them up on IMDB, I notice that Svenson is in a ton of movies I like. As bit parts, sure, but still. I’ll stick with Joe Don Baker though, as he was my first instinct…

20) Of those notable figures in the world of the movies who died in 2010, name the one you’ll miss the most

I think I’ll go with what has to be a common answer to this one: Leslie Nielsen.

21) Think of a movie with a notable musical score and describe what it might feel like without that accompaniment.

The first thing that came to mind was the soundtrack to John Carpenter’s classic Halloween. Part of the reason I’m choosing this one is because the story of how the music was created is famously due to the fact that an executive saw an early cut of the film without music and thought it wasn’t scary. I’ve actually written about this before, quoting Carpenter himself:

I screened the final cut minus sound effects and music, for a young executive from 20th Century-Fox (I was interviewing for another possible directing job). She wasn’t scared at all. I then became determined to “save it with the music.”

And save it he did. Another example from the world of horror would be John Williams’ score for Jaws, which incorporates a long build-up of tension that is eventually released in horror.

So Aaron Sorkin’s work on The Social Network is certainly worth consideration here, but I’m going to go with Inception. You’ll note that I didn’t include Christopher Nolan in my discussion of best director, and I think that’s because he’s more notable as a writer than as a director. It’s the ideas and storytelling that he excels at. I suppose you could argue that Inception is overly dependent on exposition and info-dumps, but I think the puzzle-like structure of the plot is an achievement in itself.

23) Movie You Feel Most Evangelistic About Right Now

My first thought was Olivia Wilde, but that’s only because I know who she is. It turns out that I knew Gemma Arterton too, but not as well. Neither has a particularly impressive resume and I like them both, so I’ll stick with my first instinct (though Arterton was my favorite part of the horrible Quantum of Solace, and she wasn’t even the main Bond girl).

Excluding 2010 releases (since we’re already talking a lot about them in this quiz): The Treasure of the Sierra Madre, Sunrise: A Song of Two Humans, and Blood and Black Lace. Honestly, it was a bit of a slow year for me in terms of older films and I didn’t make it very far on my list of the Greatest Movies I’ve Never Seen. Ohh, I forgot about The Birds – that should definitely be on this list…

Love and Other Drugs comes to mind. It’s a pretty cliched film, but the two leads have a great chemistry together. Plus, nudity.

Ever? That’s incredibly difficult. I suppose I have to acknowledge Star Wars: Episode V – The Empire Strikes Back, but I think that’s mostly due to the fact that I was so young and impressionable at the time. Psycho has a pretty great ending that actually managed to surprise my jaded teen self… And I have to admit that Lone Star caught me completely off-guard. Se7en has a good one, and while I know a lot of people don’t like it, I do think The Usual Suspects has a fantastic twist ending. I could keep going and never actually reach a favorite.

Well, I don’t need a cinematic reason to read a book, but I suppose the craptacular first half of the year (which, as I’m discovering on DVD/BD/Netflix, wasn’t as craptacular as I thught) was a pretty good reason to stay home. Then again, the worst movie I saw in theaters this year came out relatively recently: Skyline (which is absolutely terrible, though I have to admit that I love the gloriously stupid ending).

Uh, be better? Good movies are always welcome. I suppose we could do with less 3D BS as well.

Well, there you have it.