A couple of weeks ago, I started brewing an English Brown Ale. After two weeks in the fermenter, I went ahead and bottled the beer this weekend. Just another couple of weeks in the bottle to condition, and they should be ready to go (supposedly, the impatient can try it after a week, which I might have to do, just to see what it’s like and how it ages).

The final gravity ended up at around 1.008, so if my calculations (and my hydrometer readings, which are probably more approximate than I’d like) are correct, this should yield something around 4.5% alcohol. Both my hydrometer readings were a bit low according to the worksheet/recipe I was using, but that ABV is right in the middle of the range. I suspect this means there won’t be as much sugar in the beer and thus the taste will be a bit less powerful, but I guess we’ll find out.

I ended up with a little more than a case and a half of bottled beer, which is probably a bit low. I was definitely overcautious about racking the beer to my bottling bucket. Not wanting to transfer any yeast and never having done it before, I was a little too conservative in stopping the siphoning process (which was a lot easier and faster than I was expecting – just add the priming sugar and get the siphon started and it only took a few minutes to transfer the grand majority of the beer to the bottling bucket). Next time I should be able to get around two full cases out of a 5 gallon batch.

Once in the bottling bucket, the process went pretty smoothly, and I actually found filling the bottles up and capping them to be pretty fun (the bottling wand seems like a life saver – I’d hate to do this with just a tube). Once I got towards the bottom of the bucket, it was a bit of a challenge to get as much out of there as possible without oxidizing the beer too much. I managed to get myself a quick cup of the beer and took a few sips. Of course, it was room temperature and not carbonated enough (carbonation happens in the bottle, thanks to the priming sugar), but it sure was beer. I didn’t detect anything “off” about the taste, and it smelled pretty good too. Maybe I managed to not screw it up! 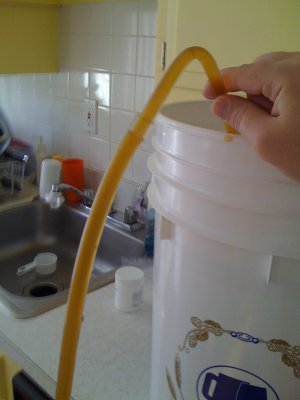 The worst part of the process was really the sanitation piece. Washing and scrubbing two cases of beer bottles, then getting them to dry out (as much as I could – I’m sure some still had some water in them when I was bottling, which is probably bad) was a huge, tedious pain in the butt. That was probably the most time consuming portion of the process. The actual bottling/capping probably took the same amount of time, but that was more fun. It probably took a little over 2 hours in total, which actually wasn’t that bad. In the end, I’m pretty happy with my first experience in brewing. Even if the beer turns out terrible or bland, I feel like I’ve learned a lot and will undoubtedly have an easier time of it in the next round. Speaking of which, I’m looking to put together a recipe for a Belgian Style Tripel. This will be a higher gravity beer and probably take longer to brew, but it’s one of my favorite styles and it’s apparently not that difficult either.

(Cross posted at the Kaedrin Beer Blog, along with some other stuff posted today)