Otaku Kun points to a wonderful entry in the Astronomy Picture of the Day series: 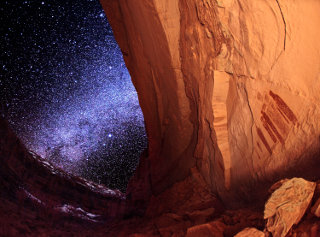 The photo features two main elements: a nice view of the stars in the sky and a series of paintings on a canyon wall in Utah (it’s the angle of the photograph and the clarity of the sky that makes it seem unreal to me, but looking at the larger version makes things a bit more clear). As OK points out, there are two corresponding kinds of antiquity here: “one cosmic, the other human”. He speculates:

I think it’s impossible to really relate to things beyond human timescales. The idea of something being “ancient” has no meaning if it predates our human comprehension. The Neanderthals disappeared 30,000 years ago, which is probably really the farthest back we can reflect on. When we start talking about human forebears of 100,000 years ago and more, it becomes more abstract – that’s why it’s no coincidence that the Battlestar Galactica series finale set the events 150,000 years ago, well beyond even the reach of mythological narrative.

I’m reminded of an essay by C. Northcote Parkinson, called High Finance or The Point of Vanishing Interest (the essay appears in Parkinson’s Law, a collection of essays). Parkinson writes about how finance committees work:

People who understand high finance are of two kinds: those who have vast fortunes of their own and those who have nothing at all. To the actual millionaire a million dollars is something real and comprehensible. To the applied mathematician and the lecturer in economics (assuming both to be practically starving) a million dollars is at least as real as a thousand, they having never possessed either sum. But the world is full of people who fall between these two categories, knowing nothing of millions but well accustomed to think in thousands, and it is these that finance committees are mostly comprised.

He then goes on to explore what he calls the “Law of Triviality”. Briefly stated, it means that the time spent on any item of the agenda will be in inverse proportion to the sum involved. Thus he concludes, after a number of humorous but fitting examples, that there is a point of vanishing interest where the committee can no longer comment with authority. Astonishingly, the amount of time that is spent on $10 million and on $10 may well be the same. There is clearly a space of time which suffices equally for the largest and smallest sums.

In short, it’s difficult to internalize numbers that high, whether we’re talking about large sums of money or cosmic timescales. Indeed, I’d even say that Parkinson was being a bit optimistic. Millionaires and mathematicians may have a better grasp on the situation than most, but even they are probably at a loss when we start talking about cosmic timeframes. OK also mentions Battlestar Galactica, which did end on an interesting note (even if that finale was quite disappointing as a whole) and which brings me to one of the reasons I really enjoy science fiction: the contemplation of concepts and ideas that are beyond comprehension. I can’t really internalize the cosmic information encoded in the universe around me in such a way to do anything useful with it, but I can contemplate it and struggle to understand it, which is interesting and valuable in its own right. Perhaps someday, we will be able to devise ways to internalize and process information on a cosmic scale (this sort of optimistic statement perhaps represents another reason I enjoy SF).