Several years ago, I started a Video Game Retrospective, beginning with my first video game console, the Atari 2600 then moving on to the Commodore 64. In typical Kaedrin fashion, I have thoroughly ignored the series for a little over two years, so it’s probably time to get back on the horse. I was reminded of the series during my recent bout with Bionic Commando Rearmed as well as accidentally stumbling upon a box with a good portion of my old Nintendo cartridges (along with reams of paper containing various passwords and maps, etc…)

So this third installment will be focusing on the classic Nintendo Entertainment System (aka the NES). My memory on exactly when I got an NES is a bit fuzzy, but I can say that it was at the very earliest 1989 – this is actually somewhat late in the life cycle of the NES (the Genesis was introduced within a year, and the SNES not much later than that). Despite this fact, I played quite a bit of NES. The multitude of available games ensured I always had something new and interesting to play, and these games tended to be better, deeper, and more fun than the previously discussed Atari and Commodore games. In addition, the transition to the 16 bit era seemed to take a bit longer than other transitions in the history of gaming (at least, from my own subjective memory of such things, which is probably not very reliable). Most of my friends had an NES, and even the fancy ones who got newer consoles still had and played the NES. 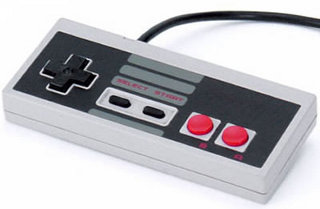 Something that never really occurred to me until recently is just how revolutionary the NES controller was. There really hadn’t been anything like it up until that point. Both of the previous systems I mentioned had joysticks of some kind. I remember that I had some weird handheld football game (not sure if those match exactly what I had, but it was close Update: It was an Entex: Color Football 4…) that had a sorta gamepad style control (i.e. buttons for up/down/left/right) and I’m sure some arcades had similar style controls, but the dominant controller at the time was the joystick. The gamepad was a huge innovation and it’s something that survives to this day (even Nintendo’s new fancy motion-controllers double as old fashioned NES controllers, which is actually kinda impressive). I don’t want to get into a holy war regarding the history of video game controllers, but it does seem like Nintendo has always been an innovator in that realm. Sometimes that hurt them (I believe the N64 controller was the first major console controller to feature an analog stick, but Nintendo wasn’t sure how that would work out, so they also included a standard gamepad style control, which resulted in a weird three pronged controller), sometimes they scored big (the wiimote). In any case, the classic NES controller is pretty awesome, despite the blocky, non-ergonomic design.

The previous two installments were an interesting exercise in nostalgia, and I had some fun revisiting those games, but for the most part, those games were severely lacking. The NES generation of games was the first generation that utterly enthralled my young self. I can still remember the excited anticipation as my parents drove me to Toys R Us to pick up the action pack, and the giddy joy as I played Super Mario Brothers and Duck Hunt well into the night. I fondly remember hours of grinding through RPGs, mastering various keyboard combos and maneuvers, taking notes and drawing maps on pieces of paper(!?), and other things that I’m amazed I put up with. I remember the strange problems with the top loading cartridges and the silly-yet-seemingly-effective countermeasures (such as blowing on the cartridge or using the Game Genie as an intermediary). Most of all, I remember having a lot of fun, which is what this is all about, right?

The way these retrospective series have gone is that I do an introduction, then I pick one favorite game, then I post several honorable mentions, and conclude with a few links and additional thoughts. Because the NES has so many incredible games that totally blew me away during my formative years, choosing a single favorite would be impossible. As such, I’m not really sure how many posts I’ll get out of this, but I plan to be done in a couple of weeks (at which time the annual six weeks of Halloween will commence). I’ve been revisiting my favorite games on the Virtual Console of my Wii and also on an emulator on my computer (much easier to get screenshots that way, and the emulator offers certain functionality that makes the more frustrating aspects of some games more bearable (i.e. the ability to save – which, yes, is a cheat, but sometimes I like cheats)). A tentative schedule of posts is listed below:

Depending on time, I might even check out some games I didn’t play much (or games I never played at all). In a lot of cases, I’ve played only one game in a given series. For instance, I never cared much for Mario, and as such I only ever owned the one that came with my system. Sure, I played part 2 and part 3 from time to time at friends’ houses, but I was never really down with the series. In other cases, when I got my hands on enough cash to buy a game, I ended up buying the latest incarnation of a series I know I liked (Castlevania III is a prime example, but there were several others).

In the end, I’m sure my retrospective will be woefully incomplete from any objective standpoint, but as with my other retrospectives, this is a) a subjective list and b) limited to my experience playing video games as a youth. That being said, feel free to list your favorites or make suggestions in the comments. I’m doubting that I’ll have a ton of time to devote to them, but you never know…