I recently wrote about Flower, a game which I think qualifies as art while losing none of it’s inherent entertainment value. Indeed, as I had mentioned in this old guest post by Kaedrin friend Samael, I have a pretty broad definition of art and have no issue seeing a wide variety of video games as art. However, it’s rather interesting that many of the people working in the field don’t see their efforts as art. In Sam’s post, he references an interview with Hideo Kojima (who, in Sam’s words, “is one of the most significant forces in video games today, the creator of Metal Gear”), who says “I believe that games are not art, and will never be art.”

Last week at GDC, there was a panel featuring three highly respected game creators, including Fumito Ueda, lead designer and director of Shadow of the Colossus. My recent video game kick was set into motion by my purchase of a PS3, but I’ve also spent some time discovering and revisiting games for other systems… and one of the games I revisited was Shadow of the Colossus. It truly is an intriguing game and a wonderful idea. The game starts off typically enough – a lone rider approaches a temple with his dead lover in the hopes that the spirits that live in the temple will revive her. The rider is met by a disembodied voice, which tells him that he must defeat a series of Collosi before he can be reunited with his lover. This is where the game starts, but it’s also where the surprises start coming. There are no fantasy game or RPG staples like towns or NPCs and aside from the Colossi, there are no other “enemies” in the game. You spend a fair amount of time travelling through the expansive world the game has created, but the pretty landscapes are not broken up by small battles or other characters. To be sure, even the Colossi aren’t an enemy so much as they are an obstacle to your ultimate goal. Fighting the Colossi is also unusual in that each one has its own set of weaknesses and thus each one must be approached in a different manner. It’s more of a puzzle game, forcing you to observe the environment around you and the actions of the Colossus before acting. It’s very much a game that relies on the player’s ability of probing (i.e. the exploration of the game world and its possibilities).

This is an elegant idea for a video game. A game that basically features a series of 16 boss fights that are won or lost on the basis of thinking rather than brute force. Visually, the game is quite pretty. As I mentioned before, there are times when you must navigate through the game world… and nothing happens during that time. You simply ride your horse towards the next Colossus. There are occasionally mini-puzzles you must solve before getting to the Colossus, but for the most part, you are given a lot of time to think while riding around on your horse. The landscapes are sufficiently pretty and epic that they never become boring, and the game seems to relish these downtimes in order to give the player time to think about what they’re doing. 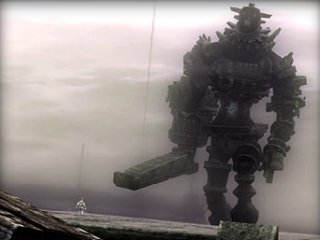 I actually haven’t finished the game yet, and I have to admit that there are times when I’ve had to resort to a walkthrough to figure out how to defeat a few of the Colossi (in this and a couple of other areas, the game could perhaps use some work – however, this post is not about that), but I do find the game fascinating, in part because of the relatively silent moments navigating through the world. Even though I’m not at the end of the game, I have an inkling of what’s going to happen. I’m fairly certain that the spirits of the temple are misleading my character, and that there will be some sort of betrayal in the end. I seriously doubt my character will be reuinited with his lover, except possibly in death.

The reason I’m thinking this is how it will end is that the game’s story has all the earmarks of a traditional tragedy. What I’m seeing is a man motivated by the loss of a loved one. He is so blinded by his loss that he doesn’t recognize that he’s destroying these gigantic, beautiful creatures (some of whom are admittedly aggressive). I just can’t see this ending well. I have to admit that this feeling isn’t entirely based on the game itself. It’s been out for a while, and the way everyone talks about the game seems to indicate an unhappy ending. It seems that people who review the game try their hardest not to spoil the ending, but skirting around the issue is difficult and the game itself does point in that direction.

The interesting thing about this, to me, is that my feelings on the game are predicated on art. In this case, it is dramatic literature or more specifically, tragedy, that is informing my feelings for the game. While I have gleaned some idea of this from reading about the game, a lot of it came from the time for reflection that is seemingly built into the game. It seems to me that the makers of the game really did want players to take that time to think about the story of the game.

Interestingly, when asked about the game during the panel mentioned above, Ueda had this to say:

The second and final question, lauded Shadow of the Colossus as the posterchild of “games as art”, but Ueda disagreed. “My team and I are making a game which is close to art — that’s what people say. Personally I don’t think that way.”

What is going on here? Why is it that such prominent game creators are so reticent to call their games art? The answer seems to be that they are more focused on entertaining players of video games than engaging in artistic enterprises. I suppose there is something to that idea. In my mind the best art is also entertaining, and a lot of people who set out to create art often end up making something that is difficult to relate to or understand. Some artists see this difficulty as an ends unto itself and end up producing truly impenetrable works. However a lot of successful artists try their best to avoid such pitfalls. In my previous entry, several people asked author Neal Stephenson about how he comes up with various ideas or what he thinks his books represent, and his response to such questions is generally something about how he’s not that introspective about his work and that perhaps thinking to hard about such things would make his work worse. I think perhaps there is something to that.

Another idea was brought up by Emil Pagliarulo (lead designer of Fallout 3 among other games):

Pagliarulo took up this point in comparison to the film industry. “Early films were meant to entertain and became art along the way as part of that process… I think the whole Roger Ebert ‘are games art’ thing gets taken a little too far.”

“We’ll come into our own. We don’t have to push the issue. Who are we trying to impress? I think game developers should concentrate on making good games. The art thing will happen naturally.”

I think he’s on the right track there. I don’t know the answer, but I do wonder how early filmmakers thought of movies. Did D. W. Griffith consider himself an artist? When Sergei Eisenstein started formulating his theory of montage, did he consider what he was doing to be art or was he simply a craftsman figuring out how to use various tools? Was that even a question that was asked back then? This is something I’d have to look into more before saying for sure, but I wouldn’t be surprised if Griffith or Eisenstein did not consider themselves artists. The interesting thing about video games is that they are such a young medium and that they’ve come a long way in such a short time. In the quote above, Pagliarulo mentions that the art thing will happen naturally, as if it hasn’t happened yet. Again, I find this confusing. I’ve pretty much always considered video games art, in at least some ways.

There is a lot more to this subject than I’ve written about in this post (for instance, Pagliarulo made reference to Roger Ebert’s infamous stance that video games can’t be art), but what I wanted to explore was why video game creators tend to shy away from the artist label… The question that keeps popping up in my head is whether or not entertainment can be art. To me, the two have always gone hand in hand. You can’t have entertainment without art and most art is meant to entertain (or at least, engage the consumer) in some way or another. I suppose there is a distinction to be made between entertainment and art – you can certainly be entertained by something that is bad art, or bored to tears by something that is good art. In the end, of course, it’s all subjective, but I still say that games are artistic and am not really sure why some people are so hesitant to call games art.