The games I’ve played for the PS3 include Assassin’s Creed, the Resistance games, Call of Duty 4 and Dead Space. One thing all those games have in common is that they’re very violent. For crying out loud, the core gameplay of Dead Space is advertised as “strategic limb dismemberment.” Now, I’m not inclined to say there’s anything particularly awful about violent video games, but it can get to be a bit much. Enter Flower. 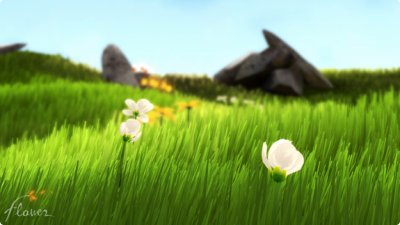 Instead of playing a grizzled space-marine or an assassin, you control… the wind! As you pass flowers, you cause them to bloom and you start to collect a trail of flower pedals. The flowers are arranged in various patterns and as you complete the series, you transform the environment or create a new windflow, among other results. These transformations are oddly satisfying. The landscapes change as you progress through the game, and strangely enough, there’s something of a narrative to the progression. Of course, there’s no exposition at all, which leaves the “story” (such as it is) open to interpretation, but there are some thrilling momemnts and even surprises in the game (including one “twist” about halfway through the game).

Controlling the wind is done by using the much-maligned Sixaxis tilting functionality of the PS3 controller, and pressing a button (any button) to “blow” the wind forward. Strangely enough, its exactly the sort of game you’d expect to see on the Wii… but it works just fine on the PS3. This game is a PS3 exclusive… and I have to admit that the visuals of the game are indeed very impressive. I’m not sure the game would work as well with the Wii’s graphics. Also worth mentioning is the music. As you pass each flower, you trigger a sound, usually some sort of chime, and in some situations you’re flying past flowers at a fast rate, chiming along with the background music.

The game is relatively short (3 or 4 hours), but it really is a fantastic game that brings about feelings I’m not used to getting from games. It’s a relaxing game. The simple gameplay style allows you to just sit back and enjoy what you’re seeing and hearing, even as you control what’s happening. However, don’t let the simplicity fool you. There is more depth here than is apparent at first glance. The game does have PS3 trophies, and some of them are rather complex (of course, some are rather simple, but there are tough ones as well). I would think that this is a game that most gamers would enjoy. I’d be really interested to see how non-gamers or casual-gamers would react to this game – much of what I’ve heard about the game comes from the typical hardcore gamers (not that they don’t like it, but I wonder if it’s the sort of game that could transcend gaming).

Now, I’m not as in love with the game as Brainy Gamer, but I like the game a lot, and it’s nice to play a game whose color palette goes beyond black, gray, brown, and muzzle-flash. I’m really glad I bought it (if you have a PS3, you can download the game in the PSN store for $9.99) and will most likely keep playing it fairly regularly.

ArsTechnica thinks the game is art and that it extends the conversation of what games are:

Whether or not Flower has a story is up to what you think is going on, and I’m unconvinced that the most topical explanation for the events in the game is the right one, or even the only one. Games are interactive in more ways than one, and playing Flower before it is released is actually something of a handicap; part of the draw of this game is going to be the discussions that it spawns across the gaming blogs and forums.

A while back, I posted a guest entry by my friend Samael (aka Roy) where we discussed video games as art. Sam and I pretty much agreed on a relatively broad definition of art… one that included the possibility of games. He distills the debate well:

The problem mostly seems to be that we’re asking the wrong questions. We shouldn’t be asking “are video games art” any more than we’d ask “are movies art.” It’s a loaded question and you’ll never come to any real answer, because the answer is going to depend completely on what movie you’re looking at, and who you’re asking. The same holds true with games. The question shouldn’t be whether all games are art, but whether a particular game has some artistic merrit. How we decide what counts as art is constantly up for debate, but there are games that raise such significant moral or philosophical questions, or have such an amazing sense of style, or tell such an amazing story, that it seems hard to argue that they have no artistic merrit.

And I firmly believe that Flower is one of those games. Furthermore, there is a stereotype for “artistic” games that they focus on the artistic side of the game so much that it isn’t fun to play… but for me, Flower is a clear repudiation of that argument. It’s gorgeous and it’s fun, and it is most definitely “art.”