One of the things I liked about Banner of the Stars was the worldbuilding. As such, I questioned my decision to skip the first series, Crest of the Stars. When I finished Banner, I immediately put Crest in my Netflix queue. Well, I’ve watched the first disc and I loved it. It covers a lot of the things that were hinted at in Banner, and it does a good job explaining many of the concepts (for instance, the 2 dimensional nature of Plane Space) I didn’t know about while watching Banner. A lot of stories that are set in an unfamiliar setting have a character in them that has the same knowledge as the viewer. That way, when this character learns something, the audience does too. For example, in Das Boot, the main character is a journalist who has never been aboard a u-boat. The character basically provides the filmmakers with a reason to have the captain explain things he wouldn’t normally need to explain (thus the audience gets an insight into what it’s like to be on a u-boat). There was no corresponding character in Banner, but Jinto effectively plays that part in Crest. He grows up not knowing much about the Abh and then gets a bit of a culture shock when he meets Lafiel for the first time. 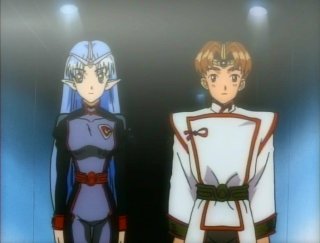 At this point, if someone asked me, I’d tell them to watch Crest first. There’s enough backstory in Banner to allow someone to watch it without having seen Crest, but I get the feeling it would be a lot better if they watched Crest first. It’s hard for me to tell, because in the comments of my first Banner post, Steven gave a great overview of the Abh, so I knew more than an average viewer might while watching Banner. Granted, I’m only 4 episodes into Crest, but so far it appears to be setting up the characters so that you care more about them by the time Banner rolls around. Still, I enjoyed some of the subtle character moments that establish the relationship between Jinto and Lafiel – for example, when Jinto asks Lafiel what her name is, it seems kinda strange at first, but then you find out why that moment is important a little later. Good stuff. I’m looking forward to the rest of the series.

A few more assorted thoughts and screens below the fold…

The animation in Crest of the Stars seems to be crisper than Banner of the Stars, which lends an overall better visual effect to the series. My Banner DVD set has only 2 discs with 6-7 episodes on each disc. That’s more than I usually see on a single disc, so perhaps those discs are sacrificing quality for quantity. 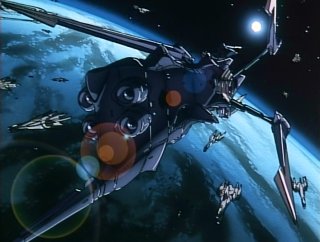 When Jinto becomes a nobleman, he gets sent to another planet and secretly schooled until he gets old enough to enter the Abh military academy. When he’s leaving his school, his buddy comes to visit him on the space station. It’s nice to see that the fist bump remains a fixture in future culture. Also, it appears that Jinto’s friend is a member of the X-Men. 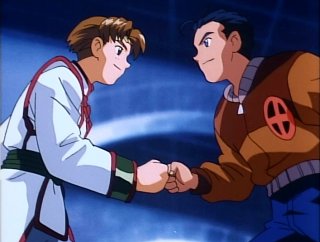 At one point, Jinto and Lafiel are traveling in an turbolift (for lack of a better term) and the indicator features a bunch of geometric shapes (instead of numbers or letters). The light moves from left to right as they move. The shapes seem somewhat orderly, but I wasn’t sure if they had a specific meaning or if they were meant to approximate the shapes or sizes of the various areas they were passing through… 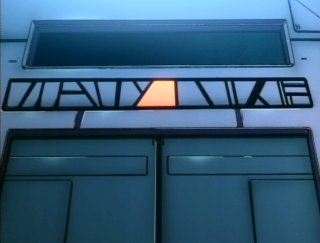 Well that’s all for now. Disc 2 just arrived today and Disc 3 should be arriving tomorrow. I could potentially get disc 4 this weekend too, if I hurry. In any case, I should have one last update on Crest next Wednesday.