I’ve been following along with Filmspotting‘s Noir Movie marathon, and after viewing a couple of movies, I began to think about how many of the most innovative movies are often somewhat underwhelming when you catch up with them. For instance, I hadn’t seen Double Indemnity before. It’s a classic film, one of the first Film Noirs, and while I thought it was great, I wasn’t quite so sure what all the fuss was about. During their review, Filmspotting’s Adam remarked that this was a perfect film, one that he thinks is among the best of all time. Sam thought it was great, but perhaps not perfect.

After looking around a bit, I think I’m starting to see part of why this movie has won so much acclaim. There are some things that would probably come across after multiple viewings, but one of the primary reasons this movie is loved is that it was amongst the first Noir films, and it set the bar for all that followed it. Many of the conventions of the genre were presented for the first time in this film, then copied and imitated as time went on. For instance, the use of lighting through Venetian blinds presents the viewers with a distinct image. The shadows that fall on the walls and on characters’ faces look like the bars on a jail cell, and this makes the characters seem trapped by their actions. It’s a subtle effect, and it’s become a standard convention of the genre. 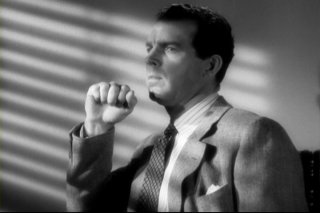 I think part of the reason Sam and I were a little underwhelmed by this is that we’ve already seen several movies that imitate Double Indemnity, and thus weren’t as impressed by the innovative nature of the film. After learning more about the film, after putting it in its cultural and historical context, I’m beginning to see why it’s viewed as a classic… but I’m still not sure what it all means.

This happens all the time with classic films. Citizen Kane is often regarded as the greatest American movie of all time, yet a lot of folks watching it today find it to be a bit of a bore. I have to admit that when I first saw it for my college film class, I thought it was good, but I couldn’t see why it got such great reviews. There are a lot of reasons, but one of them is that the film was simply revolutionary. Orson Wells’ bag of cinematic tricks were perhaps not entirely innovative, but the combination of everything – the extreme closeups, the odd angles, uncanny arrangements of backgrounds and foregrounds, the flashbacks and broken narrative structure – was extraordinary. Wells broke free of the spacial constraints of the frame, and his film has been an inspiration to all who followed it. In Michael Chabon’s Pulizer winning novel, The Amazing Adventures of Kavalier and Clay, the main characters, a pair of comic book creators, see the film and are astounded:

… Citizen Kane represented, more than any other movie Joe had ever seen, the total blending of narration and image that was – didn’t Sammy see it?- the fundamental principle of comic book storytelling … Without the witty, potent dialogue and the puzzling shape of the story, the movie would have been merely an American version of the kind of brooding, shadow-filled Ufa-style expressionist stuff that Joe had grown up watching in Prague. Without the brooding shadows and bold adventurings of the camera, without the theatrical lighting and queasy angles, it would have been merely a clever movie about a rich bastard. It was much, much more, than any movie really needed to be.

The two comic book creators saw a way to escape the constraints of their medium as a result of Citizen Kane. Of course, I’m talking about a work of fiction here, but Chabon has said that he based one of his characters on the legendary comic book artist Will Eisner, who has admitted how much his comics owed to the movies, and notably Citizen Kane.

However, even knowing this, Citizen Kane isn’t the sort of movie I like to watch over and over again and I can see why lots of people think it’s boring. All of the innovations in the film that were so breathtaking at the time are now taken for granted, just as I took the Venetian Blind effects in Double Indemnity for granted. We look at some of these things and think, “Jeeze, I’ve seen that a million times before.” But at the time the film was made, audiences hadn’t seen these things before…

This raises a number of questions, and I’m not sure I have any satisfactory answers. Are innovative movies better than what follows simply because they were the first to do something? Are the movies that follow an innovative predecessor any less effective because someone else used a particular technique first? How well will innovative films hold up after time and is a film that uses similar techniques to address contemporary issues any worse? Film is a relatively young medium, and many of the earliest films are difficult to appreciate unless you have a good understanding of their cultural and historical context. Does that make them any better or worse?

I don’t think there are any real answers here, only more evidence of the subjectivity of art. Even contemporary films suffer due to lack of context. I’ve seem my share of foreign films and am a fan of many, but I have to admit that there is a nagging feeling that I’m just not getting it. Many times, I can feel something wrong with the translation, and it’s difficult to really tell how well I’m understanding exactly what the filmmakers are looking to do. Citizen Kane is a hard enough nut to crack, let alone something like Seven Samurai. This is perhaps a bad example, as Seven Samurai comes in an exceptional Criterion Collection edition that belabors its many virtues. But a lot of films don’t get such treatment, and thus it’s more difficult to understand what’s happening on screen. Another example, last week, I rented Sonatine and got the distinct impression that I was missing something. The film was released on DVD in America through Quentin Tarantino’s Rolling Thunder Pictures collection, and the DVD has a few extra features, including an interview with the film’s writer and director, Beat Takeshi (aka Takeshi Kitano). In it, he’s asked about what he thinks of Quentin Tarantino’s movies, and he responds that he likes them, but that he wishes he spoke English. This makes a lot of sense when you think about Tarantino’s style, wihch includes lots of great dialogue. I’d bet that a lot of the intricacies of his dialogue is lost when translated, and I always wonder what I’m missing when I see a foreign film. Film snobs like to complain about the ignorant masses who won’t give foreign films a chance just because of subtitles, but I think the translations play into this as well.

Again, I don’t have any answers here. Like all art, film is subjective, and while it’s important to recognize the achievements of innovative films, it’s also important that those films be entertaining and I can see how some folks don’t especially care for the “classic” films like Citizen Kane or foreign films like Sonatine. Most people are looking to be entertained and if you’re not interested in the history of film or a movie’s story, then you’re probably not going to give a crap that Citizen Kane pioneered the use of deep focus in film. You’ll just yawn because you’ve seen it a million times before. Context matters, and it’s not just the context of the film that’s important, but the context of the viewer as well…