The next film in the animation marathon is Ghost in the Shell. Like the previous film in the marathon, Akira, I had already seen this movie a few times before revisiting it for the marathon. Unlike Akira, my original opinion of this film was relatively high, and this most recent viewing hasn’t changed my feelings much. Ghost in the Shell is not perfect, but it holds up well and is an excellent animated film.

Like Akira, Ghost in the Shell is often held up as one of the essential pieces of anime that anyone interested in the form needs to see. Historically, it was the first anime film released simultaneously in Japan and in other markets (notably the UK and the US), but it proved a little too complex to become a mainstream success. However, it found a market on DVD and has enjoyed cult status ever since.

The story takes place in a futuristic world where technology has advanced considerably and has begun to displace biological components of the human body (this even includes the brain). Cyborgs are common, and indeed, many people are more machine than human (those who can afford it, at least). One such cyborg is Major Motoko Kusanagi. She heads up a team that is part of section 9, an intelligence organization that tends to work more in the shadows (as opposed to their counterparts in section 6, whose role could be described more diplomatically). 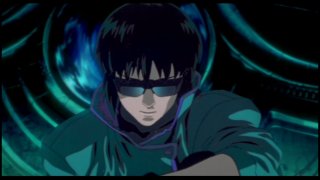 All this technology comes at a price though. Increased internet connectivity and human-computer brain interfaces have introduced new vulnerabilities, and a new crime has appeared: Ghost hacking. The “Ghost” essentially represents a person’s individual identity (while the “shell” represents their physical body, be it biological or artificial), and hackers can access and manipulate a human’s ghost. A ghost hacker named “The Puppet Master” has appeared on the scene, hacking into various people, erasing their memories and programming them to do his bidding. Section 9, lead by the Major, has been chasing the Puppet Master for a while now, and some pieces of the puzzle are beginning to fall into place… 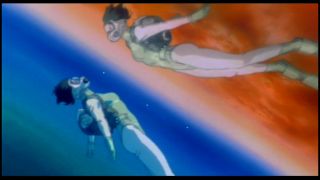 It’s a dense story, and the technological advances pose a ton of intriguing questions about the nature of identity. The Major, whose physical body is almost all machine, is understandably a little paranoid about her identity. Is she really who she thinks she is? Is anyone really who they think they are? What makes me what I am? If my consciousness is transferred into an artificial brain, am I still me? This is the sort of thing that will stay with you long after the film has ended. After watching Ghost in the Shell, Steven Den Beste wrote a fascinating article exploring these concepts:

Ghost in the Shell challenged me to consider the question of what I actually am. What makes me what I am?

What am I? That can be answered in many ways. I am a particular human being; I am this body. But is the entire body really part of the essential me? I don’t consider myself to be different – or to have died – if I trim my fingernails or get my hair cut. If I suffered a grievous injury and had a limb amputated, I would still be me. If I received a heart transplant, I would still be me. (And the donor of that heart would still be dead.)

The whole article is great and helps illustrate the intellectually challenging aspects of the story. The film explores these questions in detailed philosophical conversations that may be a little to overt for some, but it works well in a plot that intersperses enough action and intrigue to keep the viewer’s attention. While the film does include governmental agencies and a futuristic city, I think it’s worth noting that this future isn’t a dystopia. It’s a well realized vision of the future, but it actually doesn’t feel all that different from our own world. That is to say, things aren’t perfect, but we haven’t descended to the ninth circle of hell just yet either. This is a large part of why I enjoyed this film more than I enjoyed Akira. Both movies deal with big ideas and transcendant themes, but Akira‘s characters are shallow and unsympathetic and it’s ideas are only given a superficial exploration. Ghost in the Shell, on the other hand, has several sympathetic characters and it delves much deeper into it’s conceptual vision. The ending of both movies involves some ambiguity, but Ghost in the Shell‘s ending resonates deeper because I could empathize with the characters (even if the plot was a little convoluted). 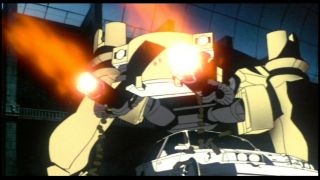 Visually, Ghost in the Shell is impressive. Like Akira, it’s a spectacular piece of work, and quite engaging. The animation is extremely detailed and fluid (though I have to admit, I think I’m more impressed with Akira‘s animation). The action sequences are well orchestrated and sometimes approach a poetic feel. The soundtrack is evokative and well suited towards the subject matter, though the dubbed voiceover is amongst the worst I’ve heard. Ironically, I think subtitles may suit this script better than spoken word in some cases (see my musings on the varying translations on the dubbing and subtitled versions), as the longer monologues sound absurd when spoken aloud in a monotone voice, but don’t seem so ponderous when read by the viewer. Symbolism, such as the use of a wall charting the evolution of life in the climax of the film, is used but not abused. As previously mentioned, the juxtaposition of action sequences with philosophical musings may seem a little disjointed and jarring to some, but I was taken in by the film. 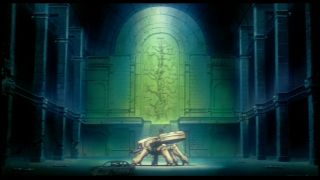 Ultimately, we’re left with a visually stunning, intellectually challenging, action packed movie. Unlike Akira, this movie had more of an emotional impact and it provoked interesting thoughts. It stuck with me, and forced me to ponder some of the great unanswerable questions. While I wouldn’t call it a perfect film, it is well worth the watch and definitely amongst the Anime essentials. Three Stars (***)

Update: Filmspotting has posted their review, and their feelings were mixed. Neither seemed to be impressed with the story (or couldn’t follow it) or the visuals, but Sam seemed to like it for the same reasons I did (though Adam did not).

More images and assorted comments below the fold…

As with Akira, I took too many screenshots and wanted to show off some of the visuals in the movie here in the extended entry.

Action sequences are frequent and well done. I wanted to use this image in the above review, but it seemed a little out of place and didn’t flow with the review or the other screenshots. In this shot, a ghost hacked individual is using high velocity ammo, and the animation shows him bracing his body and still being pushed back by the force of firing his weapon. Neat effect, but it doesn’t translate well to a static image: 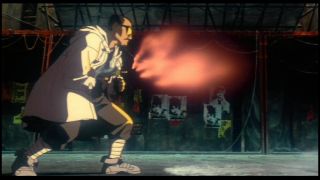 This next shot shows the Major and her partner Batou, who is clearly taken with the Major, but not necessarily in a romantic way. There’s a dynamic between the two that isn’t really explored too deeply, but is interesting nonetheless. It makes sense that their relationship would seem weird to me though, because they’re both cyborgs that are mostly machines… and I would assume that things are different in some way. 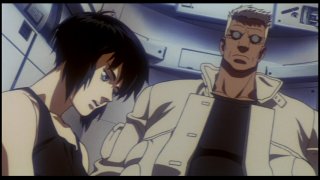 The next two shots show the setting of the movie, which is a large unspecified Asian city. As I mentioned in my review, though the city is futuristic, it’s not a dystopia and it doesn’t feature all the lame cyberpunk tropes that populate most such futuristic settings. In fact, it resembles current cities, only it’s larger and more advanced… 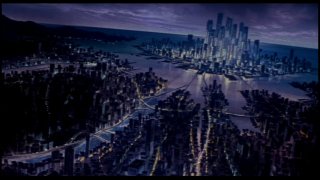 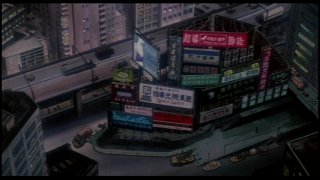 At the film’s climax, the Major faces off against a tank that looks more like a spider than a tank. 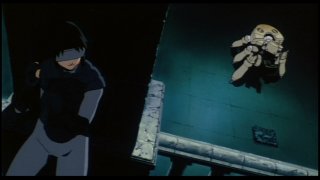 And finally, I’ll leave you with another closeup shot of the Major (there seem to be a lot of these in the film). 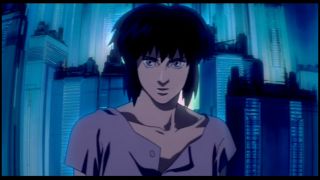 Again, an excellent movie. It’s probably not for everyone, but it’s worth watching along with Akira. Honestly, Akira might be a little more visually spectacular, but GITS wins on characters and story.