A little while ago, I became reaquanted with a game that I used to play often – the Aliens board game. I haven’t played the game in about ten years or so, and I found it interesting for a number of reasons. Gameplay is a bit of a mixture of other gaming styles, combining the arbitrary nature and futility of board games with the wonky dice and damage-table style of RPGs (Ok, you shot the alien with your pulse rifle. Roll for acid!) I noticed a few things about the game that I never did before, some good, some bad.

Before I get into those observations, I’ll have to explain the mechanics of the game a bit. The game comes with a few maps and there are a couple of scenarios that you can play, each of which is basically re-enacting a memorable scene where the colonial marines get their asses handed to them from the movie (i.e. the initial encounter with the aliens under the reactor, the later encounter and retreat through the air ducts, and a single player scenario where Ripley rescues Newt and fights the alien queen). There was also an expansion pack which featured an additional scenario. Since we’d all played the game countless times in our youth, we decided to mix things up a little and combine the regular map with the expansion map. Basically, we start at one end of the map and have to make ourselfs to the other end. This is easier said than done.

We hand out all the player cards randomly. Most of the characters are colonial marines, but there is a surprising amount of variability between characters and their abilities. Most characters are given two moves per turn, though Ripley, Apone, and Bishop have three. In terms of weaponry, some of the characters are significantly better than others. Hicks, Ripley and Apone have quality weapons to choose from. Drake and Vasquez have those awesome smart guns. On the opposite end of the spectrum, there’s the Burke character, who has no weapons (he’s essentially used as alien bait, as he should). Since there were only a few of us, we each got multiple characters to play with (which is a good thing, for reasons I’ll get into in a moment). I ended up with three relatively lame characters: Corporal Dietrich (who was armed with only a pistol), Lieutenant Gorman (whose Pulse Rifle was the most powerful weapon in my group), and Private Wierzbowski (who was armed with an incinerator). Gorman’s an ok character to play, except he’s a tool in the movie. Dietrich isn’t quite as useless as Burke, but damn near so. Wierzbowski isn’t the greatest character to play, but he’s awesome in the movie (The Wierzbowski Hunters are one of those wonderful phenomenons that could only be possible on the internet). 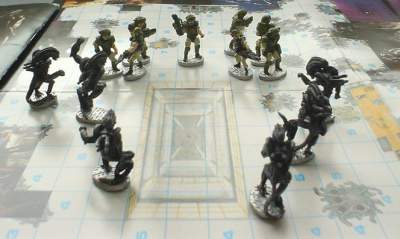 As already mentioned, our goal is to make our way from one side of the map to the other. Every turn, four aliens are added to the board in semi-random places (as the game proceeds, more aliens are added per turn). While most of the players only have two moves per turn, the aliens have four moves. If an alien enters on or next to your position, you have to roll a ten sided die. Most of the time, the result is that you are “grabbed” by the alien. Essentially, you need to be rescued by one of the other players, illustrating the cooperative nature of the game.

So the game begins, and the initial four aliens are inserted onto the board. The way the game goes for a while is that we take out all of the aliens, and move forward if possible. Eventually my characters are leading the pack and make it to the next map (half way there!), and the DM equivalent decides that we need to start adding more aliens per turn. At this point, we’re fending off aliens from all directions, and we start to take on more and more casualties. Some aspects of the game were becoming clearer to me:

As a result of my turn placement and my characters’ lame short-range weapons, I ended up leading the pack. Lieutenant Gorman, my only decent combat soldier, got attacked by an alien relatively early on, and when a teammate shot the alien, Gorman got sprayed by acid and died. This left me with Dietrich (pistol) and Wierzbowski (incinerator).

We had come to a standoff. The second map had more walls and obstructed views, so it took the aliens longer to reach us, but we also couldn’t pick them off from afar. Wierzbowski finally proved useful, as you can use the incinerator to set up a “fire wall” that the aliens can’t cross for a turn (This ability is particularly useful on the second map because of all the choke points). Still, our ranks were being worn down. I was able to block the forward onslaught, but the aliens came in on the flank and mounted a devestating attack. More than 50% of the original team had perished, and some of us were wounded (which makes it harder to hit targets). Dietrich had become completely disabled, so I had Wierzbowski pick her up in the hopes of feeding her to an alien if I got into trouble.

The game was running a little long at this point, so the DM decided to insert the alien queen (this isn’t really supposed to happen, but we like a challenge). The queen is significantly more difficult to deal with, and she managed to kill the remainder of our team… except Wierzbowski who had made his way into a room with a single block choke point. Using the firewall ability, I was able to make it to the final hallway before being attacked. I managed to take out a couple of aliens with my incinerator, but I had to sacrifice Dietrich in order to get away. Alas, the queen had made her way around, and the valiant Wierzbowski finally succumbed to her deadly advance.

Our variations on the rules aside, it’s actually a pretty well balanced game. The aliens are appropriately formidable, and they only become moreso as the game progresses. As in the movie, you can’t really complete a scenario without taking significant casualties, and even though our team did pretty well, there’s no guarantee that we’d have made it (even if we didn’t add the queen). The game was made in 1989, and is no longer available. You can find it on eBay, but it commands a relatively high price tag… It’s an interesting game, but it’s not really worth the high price these days. In the 90s, the game was a lot of fun. These days, other games have far surpassed it (especially video games). Still, it’s nice to play an old favorite every now and again.

* I should note that the game does not come with those nice figurines in the picture above. The game has these chinsy cardboard pieces with pictures of the characters and aliens. Functional, but not as nice as the figurines. Also, yes, I’m a huge nerd and can name all the colonial marines without having to look them up.