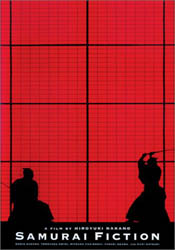 It’s conventional wisdom that you’re not supposed to judge books by their cover, that it’s what is inside that counts. In general, this holds true. Appearances can be misleading, and our perception of looks also tends to depend on the characteristics of a subject. Our perception of a person or thing is usually altered after closer inspection and interaction with them. But the first impression does count for something – it is often useful to quickly assess something, and then revise that assessment as new information becomes available. While we shouldn’t judge a book by its cover, the cover is useful in catching our eye and indicating which books call for further investigation.

For example, the other day, I was wandering aimlessly through the video store looking for something to rent when a movie cover caught my eye (see it on the right). The movie was called Samurai Fiction, and the cover featured a striking red and black grid with two silhouetted figures holding swords. I read the description on the back, which read something like this:

Feudal lord Kanzen Inukai receives a precious sword from the Shogun, but it is stolen by the samurai Kazamatsuri. Kanzen’s young son, Heishiro, insists on retrieving the sword himself to protect the family from the shame of losing such a precious gift. Heishiro’s two friends, Shintaro and Tadasuke, accompany him, ostensibly to assist him, but in reality to compete for the glory that will go to the one who defeats Kazamatsuri. After Kazamatsuri wounds Heishiro and kills one of his friends, however, the young lord no longer cares about the sword, only revenge. He recovers from his wounds in the small forest house of a rogue samurai and his daughter. The older swordsman tries to dissuade the youth from fighting, but is himself drawn into the conflict.

It’s a fairly conventional plot, but I rented it anyway. Overall, I’m glad I did. It is a black and white film with a visually stunning artistic flare. Its themes are complex, but it also has a hard-to-place lighthearted silliness to it. There are some nice comic touches, but they’re not going for belly laughs. It makes for an interesting and quirky mix. A great example of this is an old and clumsy ninja who insists on constantly sneaking up on people (his scenes are great, and the closest thing to pure humor in the film). There appear to be a lot of inside jokes and homages as well. For instance, the use of black and white can be seen as an homage to Kurosawa’s Samurai films. Interestingly, this allows the filmmakers to play with style by introducing breaks in the black and white scheme, when the screen suddenly takes on a red tint (to denote an on screen death). It is quite effective. One reviewer notes another homage:

It may or may not have been coincidental, but Fukikoshi bares a certain resemblance to John Belushi and a scene where he raises one eyebrow is a dead on reference to Belushi’s ’70s era samurai parody of Toshiro Mifune on Saturday Night Live.

Also worth mentioning is the soundtrack. It has a very upbeat rock and roll soundtrack (almost jazzy at points) that contrasts sharply with the traditional visual style of the film. I’m not sure it rubbed me the right way, but it was an intriguing choice nonetheless. This is one of the things that contributes to the film’s quirky feel. It’s also worth noting that the composer also did some work on the excellent Kill Bill soundtrack (including the music for the first trailer, entitled “Battle Without Honor or Humanity”), though I think his work better suits Kill Bill than Samurai Fiction.

Unlike others in its genre, it is not a violent film, though there is some swordplay and action sequences, those who are expecting an action packed film would be disappointed. Indeed, the action is mostly top-heavy, giving the impression that the film runs out of steam midway through the movie. My attention was beginning to dwindle a bit towards the end, but there was enough there to leave me with a good impression of the film.

Overall, it is a good film, though it has some flaws. I’m glad I rented it though, and I did so based almost entirely on the cover of the film. Interestingly, I like the cover now more than when I first saw it, indicating that I must have liked the contents of the films enough to alter my perception of the cover… So it seems that judging a movie by its cover did not lead me astray… this time, at least.