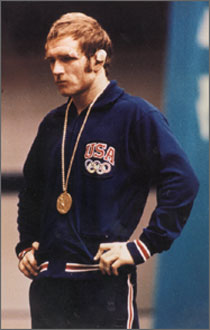 Last week, I wrote a biography for Dan Gable. Because the sport at which Gable excelled was wrestling, most have not heard of him, but within the sport he is a legend. That’s him over there on the right, pictured with his Gold Medal from the 1972 Olympics (in which he went undefeated and, indeed, didn’t give up a single point – much to the dismay of the Soviets, who had vowed to “scour the country” looking for someone to defeat Gable). His story is an interesting one, but one thing I’m not so sure I captured in my piece was just how obsessed with wrestling he was. He lived, ate, and drank wrestling. When asked what interests he has besides wrestling, the first thing he says is “Recovery” (of course, he has to be completely exhausted to partake in that activity). How he managed to start a family, I will never know (perhaps he wasn’t quite as obsessed as I thought). It made me wonder if being that good at something was worth it…

There is an old saying “Jack of all trades, Master of none.” This is indeed true, though with the demands of modern life, we are all expected to live in a constant state of partial attention and must resort to drastic measures like Self-Censorship or information filtering to deal with it all. This leads to an interesting corollary for the Master of a trade: They don’t know how to do anything else!

I’m reminded of a story told by Isaac Asimov, in his essay Thinking about Thinking (which can be found in the Magic collection):

On a certain Sunday, something went wrong with my car and I was helpless. Fortunately, my younger brother, Stan, lived nearby and since he is notoriously goodhearted, I called him. He came at once, absorbed the situation, and began to use the Yellow Pages by the telephone to try to reach a service station, while I stood by with my lower jaw hanging loose. Finally, after a period of strenuous futility, Stan said to me with just a touch of annoyance, “With all your intelligence, Isaac, how is it you lack the brains to join the AAA?” Whereupon, I said, “Oh, I belong to the AAA,” and produced the card. He gave me a long strange look and called the AAA. I was on my wheels in half an hour.

He tells this story as part of a discussion on the nature of intelligence and how one is judged to be intelligent. Which brings up an interesting point, how does one even know they are master of a trade? Nowadays, there are few who know one trade so well that all others suffer; we’re mostly jacks, to some degree. There are some who are special, who can focus all of their energy into a single pursuit with great success. These people are extraordinarily rare, and somewhat scary in that they can be so brilliant in one sphere, but so clueless in another, more prosaic, department. But that does not help us in diagnosing mastery of a trade.

When you really start to get into it, of course, the metaphor breaks down. Personally, I wouldn’t consider myself a master of any trades, but neither would I judge myself a jack. There are several subjects at which I excell, but I can’t seem to focus on any one of them – mostly because I like them all so much and I cannot bring myself to narrowly focus my efforts on a single subject. I have my moments of absent-mindedness too, though none quite so drastic as Asimov’s amusing tale. But even if I did focus my efforts, how would I know when I’ve reached the point of mastery?

In the end, I don’t think you can tell. Mastery is a worthwhile goal, even if you must sacrifice some of your favorite trades, but because we cannot tell when we’ve mastered a subject, the term really doesn’t have much meaning. As Asimov implies in his aformentioned essay, the only really useful term is “different.” It is this difference which is truly important, because what some of us cannot do, others can. This is the basis of society and civilization, and the reason we as humans have prospered as individuals.

And Just for fun, an Asimov Quote:

of us who do.” -Isaac Asimov

Update 2.15.04: John Weidner suggests “that when the time comes that we re-open diplomatic relations with Iran, Dan Gable should be our ambassador.” He makes a note of how Iranians have previously greeted “The Great Satans’ wrasslin’ team” with enthusiasm (and a cool Neal Stephenson book).