There are few who have truly taken advantage of the internet as a marketing medium. Indeed, it’s quite possible that such endeavors would not bear fruit (and as we shall see, even a compelling campaign doesn’t indicate success), but previous attempts at such advertising have proven very involving. 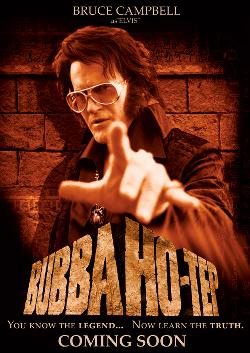 A few weeks ago, I wrote a post about a new independent movie called Bubba Ho-Tep. Apparently, this caught the attention of the Art Director of the film, who had been asked to “search out websites who might volunteer some space to put up an ad” for the new film. He sent me an email, and asked if I wouldn’t mind putting up a small ad for his film. Of course, this being an independent film, they have no money for a traditional marketing campaign, despite the obvious cult appeal and securing a theatrical distribution, so they turned to the internet. They found folks like me, who were already getting the word out about the film, and asked us to do a little more. Its an obvious step, and I was impressed that the fillmmakers have recognized the potential of the internet as a marketing medium. Naturally, I’m happy to oblige, though I have yet to decide just what form my promotions will be. Oh, sure, I’ll plaster up a few Bubba graphics and whatnot (see, there’s one down below). I’m sure that’s all they’re hoping for, and at this moment that’s the best I can do… and yet… I see potential here.

This could be so much more than just an image and link alongside gushing fanboy praise. I know what you’re thinking: Just what the hell is he talking about here?

I’m talking about Elly Kedward. As the story goes, this 18th century Maryland woman was found guilty of witchcraft, banished into the forest during a particularly harsh winter, and presumed dead. The following winter, however, over half that town’s children disappeared. Ever since then, whenever anything out of the ordinary happens in that area, people blame Elly Kedward. Several children have gone missing, some bodies have been found, and in 1941 an old hermit named Rustin Parr confessed to killing 7 children in the forest, telling authorities that a voice in his head (“an old woman”) commanded his actions. In October of 1994, 3 student filmmakers traveled to the area to make a documentary about the local legend. They were never heard from again, though their film equipment and supplies were discovered in the forest.

I am, of course, talking about The Blair Witch Project. The movie was made with approximately $30,000-$50,000, it had no script, it starred unknown actors and was made by unknown filmmakers. On top of that they used very little film, even resorting to videotape for a good portion of the movie. The only way they could get away with such things would be if people wanted to see their shoddy looking film, and to do this they tapped into the marketing potential of the internet. Drawing on their well thought out mythology and legends, they brought the story of the Blair Witch to you first, so that you’d be intrigued. They sold people on the concept of the film before the film was even released. Indeed, several people were even fooled by the site, believing all the information to be true. Using the relatively inexpensive internet, they created demand for the film. People ran to theaters to see the shaky, blurry exploits of 3 unknowns, and the film was a massive success. Of course, it was more complicated than that, and the web was not solely responsible for the film’s success (indeed, much of the hype around the film drove people to the website), though I do believe it had a lot of impact.

Another example is Evan Chan. In the beginning, all anyone knew was that Evan Chan had been murdered. Elaborate clues were peppered throughout Web sites for fictitious people and companies. In the Spring of 2001, thousands of people banded together on the internet to solve the mystery. This “internet game” was devised by the producers of the film A.I., and a Microsoft team continually updated game sites with plot twists and character development. Clues were buried in HTML code, audio files, and email messages. The game’s creators monitored the progress of players and used feedback to shape the game’s content. The game created a groundswell of interest among the computer geeks of the world, but it was a subtle effort. Indeed, it took a while for the game to even be noticed. The game’s relation to the movie was only tangential, and when the film was released, many found the game more absorbing than the much-anticipated movie. None of the game sites directly referred to the film, and no one knew the game had anything to do with A.I. until nearly a month after it had started. It took a while before Warner and DreamWorks even acknowledged that the game was a promotion for the film. The soft-sell had a lot to do with the game’s success. As a member at Cloudmakers.org put it: “Someone kept the commercials out of it, kept the hype down, kept us curious by not shoving

answers at us.” Again, its not entirely clear what impact the game had on the film. Though hundreds of thousands of people had stumbled upon the game, the number of active players was estimated to be around 7,000, hardly enough to make a difference at the box office. Then again, the amount of news media

coverage the game had generated probably benefited the studios. At the very least, the game is an extremely interesting experiment in internet marketing…

I’m not sure whether or not this qualifies, but there was a rather strange phenomenon surrounding Pink Floyd’s 1994 album The Division Bell. A self-described messenger named Publius began posting to the Usenet group alt.music.pink-floyd through an anonymous service. The posts were cryptic and ambiguous, and spoke of what became known as the Publius Enigma:

AS SOME OF YOU HAVE SUSPECTED, “The Division Bell” is not

like its predecessors. Although all great music is subject

to multiple interpretations, in this case there is a central

purpose and a designed solution. For the ingenious person

(or group of persons) who recognizes this – and where this

information points to – a unique prize has been secreted.

The mysterious posts continued on an irregular basis, often containing cryptic clues and puzzles, sparking immense discussion among fans as to the “true” meaning of The Division Bell. There were many who doubted the authenticity of Publius, and to this day, I don’t think the puzzle has been solved, nor has it been completely discredited. There was some discussion of a solution being offered, and accepted by Publius around 1997 – but the circumstances were strange, and you could easily take it to be an “exit strategy” for Publius, or to be a hoax unto itself. Even with the solution, no one knows what the “unique prize” is, as the winner conveniently botched his success(!?). And if it really was the solution, it was very lame, in my opinion.

In all likelyhood, the entire exercise was just the band (or at the very least, someone close to the bad) screwing around. I have no idea whether or not this has helped sales of the Division Bell; indeed, given that it was aimed at diehard fans, it probably hasn’t. But it is a good example of how to keep interest in a product for extended periods of time, as it seems to have taken on a life of its own.

It could be argued that all of the above examples are unsuccessful, and to be honest, I’m not sure I disagree. But at the same time, all of the above are profoundly interesting phenomena, and they exemplify the absorbing potential of the internet. It remains to be seen as to whether or not such grassroots marketing efforts can be truly successful. If the above examples are any indication, we could be in for some interesting campaigns in the future.

Will the Bubba Ho-Tep campaign grow into something that takes a life of its own? What role will I play in this campaign? Time will tell…