Tonight was beer club! For the uninitiated, beer club is a gathering of beer-minded individuals from my workplace who get together once a month for beer and revelry at a local BYOB. This time around, we went to a local Pizza place, got our fill of deep fried pizza pockets and other such delights, and naturally partook in lots of beer: 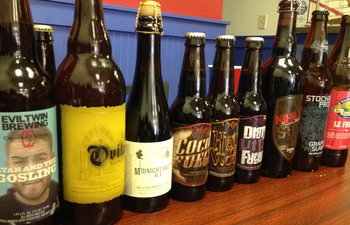 For the sake of posterity, completely unreliable notes on each beer are below. Standard disclaimers apply, and other such waffling. Great, now I have a sudden craving for waffles. Thanks a lot. Anywho, in order of drinking (not necessarily the order pictured above):

So all in all, quite a nice night. As per usual, already looking forward to next month… In the meantime, stay tuned for another .rar wale review tomorrow.