Every time I pull out one of these Voodoo barrel room selections, I wonder what the hell took me so long. The last one I tried, the Buffalo Trace Big Black Voodoo Daddy didn’t quite blow my mind, but it was a worthy beer and certainly an improvement over the base. Of course, that was aged in lowly Buffalo Trace bottles; what I have here was aged in that most hallowed of Bourbon barrels, Pappy Van Winkle (ermegerd!) I’ve already gone over this sort of thing in the past, so I’ll spare you the nerdy wrangling about why these barrels are so prized. Suffice it to say, the clouds parted and an angelic choir heralded the opening of this beer, and it was good. 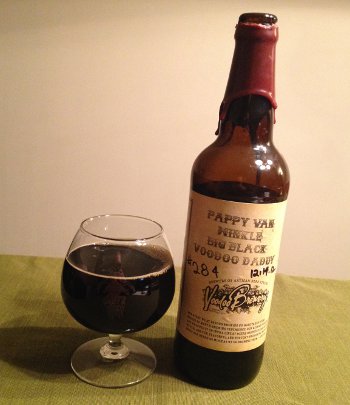 Voodoo Brewing Pappy Van Winkle Big Black Voodoo Daddy – Pours a deep black color with a cap of brown head that quickly resolves into a ring around the edge of the glass. Smells of rich caramel, a hint of roast, and a heaping helping of bourbon. Taste follows the nose, rich caramel, tons of bourbon, booze, and a hint of roast emerging in the finish. Mouthfeel is on the lower end of full bodied, rich, and creamy. Low but appropriate carbonation, some hot booze, but it’s actually pretty easy going for a monster beer. Definitely a big improvement over the Buffalo Trace variant, but still not as great as Pappy Black Magick. A-

I think I’ll crack open one of the Lairds Apple Brandy variants next, and I’ll try to make it snappy too. None of this waiting 5 months anymore. Anywho, after two relatively quick barrel room releases, things look quiet on the Voodoo barrel front. I assume they’ve filled it up again, but their website does not appear to have been updated and I haven’t heard any news on upcoming releases. Here’s to hoping they do another Philly release at some point!