Discussions of styles can be pedantic and pointless, especially when it comes to something like this beer. Beer Advocate and Rate Beer both classify it as a California Common (typified by Anchor Steam), but the defining characteristic of that style is that it’s brewed with Lager yeast at Ale temperatures, and according to Telegraph, they use their house yeast for this beer (which is descended from a Belgian ale strain). I’m guessing it gets classified that way because Telegraph also says it’s an “interpretation of the unique ales that were commonly brewed up and down the West Coast in the 19th century”, but that doesn’t necessarily mean anything when it comes to style. I’ve also seen folks call this a Belgian Pale Ale, a Belgian Amber (both of which would work, I guess), and of course, a saison (because what beer can’t be classified as a saison?) Well, whatever. Styles can give you a good idea what you’re in for, but in cases like this, the lack of agreement on styles seems to tell you something too.

Telegraph has only recently begun distributing out here (in the past year or so), though at this point, I’ve had all three beers I’ve seen available. Telegraph Reserve Wheat was a total eye opener, a Berliner Weisse that’s tart but very well balanced. Los Padres Ale was a spot-on saison style beer (inasmuch as a saison can be). And now this… difficult to categorize beer, Telegraph’s flagship brew: 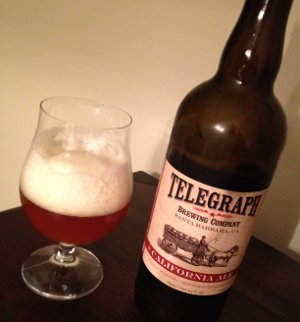 Telegraph California Ale – Pours a golden amber color with tons (let’s say 3 fingers) of big bubbled, foamy white head. Smells of earthy, musty Belgian yeast, a hint of spice, and maybe even some citrus fruitiness. The taste is sweet, a little bit of earthy hops, perhaps some nuttiness and again with the light citrus fruit character. Mouthfeel is well carbonated, almost effervescent, but really well balanced. Goes down pretty easy. Overall, I’m really enjoying this beer. Not a face melter, but a well crafted, balanced, complex, all around good beer! A-

So, what happens when you take a lager yeast and brew it at ale temperatures? In general, lager yeasts like to ferment at relatively low temperatures (somewhere around 50° or so), while ales favor warmer temperatures (let’s call it 70°, though there’s actually a pretty broad range). 19th century Californians, lacking refrigeration or even natural sources of cool water, didn’t really have much choice in the matter. The result is called Steam beer, aka California Common.

There’s no clear record on how the style gained the “Steam” moniker, but there’s plenty of speculation. The higher temperatures seem to create more carbon dioxide during the fermentation process, leading to high pressures in the various brewing vessels. One school of thought says that this buildup of pressure necessitated a release of steam before the process could complete. Another theory is that brewers, having no easy way to cool the wort after the boil, would pump the hot, steaming liquid into a series of shallow, open top bins outside the brewery, thus cooling the wort and ensconcing the brewery in a cloud of steam. Whatever the case, there is one beer that pretty much exemplifies the style: 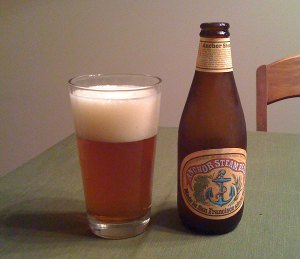 Anchor Steam – Anchor is one of the founding pillars of the American craft beer movement, and this steam beer has long been their flagship. Pours a nice, clear amber color with tons of head. Smell is sweet and fruity. Taste has a nice earthy malt backbone with a surprisingly dry finish. The body is light, crisp and easy to drink. Overall, an excellent session beer, one I could drink all night… B

Anchor will, of course, be making more appearances on the blog in the near future, and as always, I look forward to the next iteration of Anchor’s Christmas Ale.