We’ve been mightily impressed with Allagash’s seemingly expanded sour program, so we’ve been keeping an eye out for more of this stuff, and fortunately, Allagash has obliged my whims. A pretty steady stream of new bottles has been showing up from time to time, and I’m always willing to take a flier on these, even if they are a bit of a pricey proposition. Interestingly, several of their sour beers are aged on stainless steel rather than more traditional barrels, and I have to say, it doesn’t make as big of a difference as I’d think. I loved Farm to Face, and the better of today’s double feature was also a straight stainless steel offering (of course, it was still aged 2 years, so maybe that’s part of it).

First up is Tiarna, a blend of two beers, one a Brettanomyces fermented ale aged on oak, and the other a Belgian ale aged on stainless steel. It’s a nice beer for sure, but not quite up to their best offerings: 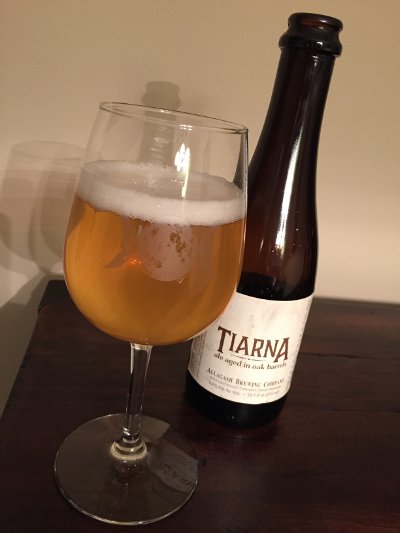 Allagash Tiarna – Pours an almost clear pale yellow color with a finger of fluffy white head that sticks around for a while. Smells quite nice, typical belgian yeast spice notes of clove and maybe anise, some fruity esters, but also that earthy Brett funk. Taste hits more bready and yeasty than expected, hints of those spicy phenols and fruity esters (not really tart at all), a bit of funk, a little oak pitching in too. Was really hoping for a little more funk and oak here. Mouthfeel is well carbonated, crisp, lightly bodied, relatively dry. Overall, this is like an entry level funky saison. It’s complex and well crafted, but restrained. I have to wonder if the funk would increase over time in the bottle, but for now: B+

Next up is James and Julie, presumably named after two people who worked at the brewery or something. Or just two random people off the street, for all I know. It’s their take on a Flanders Oud Bruin, a sour brown ale that is aged on stainless steel with Lactobacillus and Pediococcus cultures. Rumor has it that this is the base beer for Neddles (which is the same thing aged on Rum barrels and named after a former employee), but I’ll be damned if this isn’t pretty spectacular just by itself. It’s not super funky, but it’s got a very nice sourness and balance to it that just works beautifully: 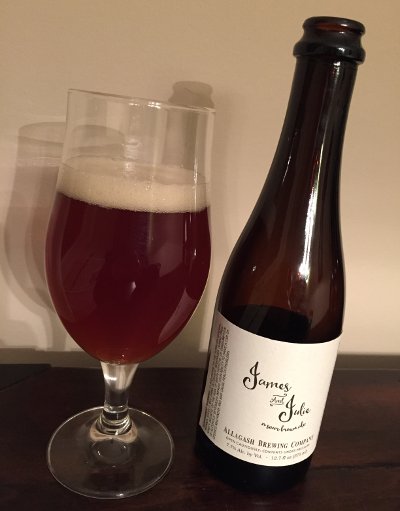 Allagash James & Julie – Pours a light brown amber color with a finger of off white head that holds its own for a while. Smells of vinegar, tart fruit, sour cherry, maybe a hint of earth. Taste starts off sweet, lots of flavor, sour cherries, vinegar, perfectly balanced amount of sourness here, really tasty. Mouthfeel is medium bodied, well carbonated, perfectly balanced amount of acidity. Overall, intense but balanced, this is a true winner. A

Always enjoyable catching up with Allagash, and I will of course be keeping an eye out for more stuff, particularly their sours, which seem to hit me just right.

You might not know this, but half of the United States’ mushrooms come from Pennsylvania, specifically around the area of Kennett Square and surrounding towns. It’s more of a historical accident than anything else, starting with industrious Quakers who couldn’t bear to waste the space under elevated beds in greenhouses (and also the prodigious horseshit-production of a major city like Philadelphia). It caught on, and now we’ve got this growing movement of foodies who grow mushrooms in their kitchens and small artisanal farms like Woodland Jewel Mushrooms who supply local eateries with exotic gourmet mushrooms.

Given Tired Hands predilection for collaborating with local farmers, it’s no surprise that they’ve tapped Woodland Jewel to make an Oud Bruin conditioned on Donko Shiitake mushrooms (according to Wikipedia, these are particularly high grade mushrooms, though a citation is neeeded!). This originally appeared at a beer dinner a while back, but has thankfully been bottled up and snagged by the likes of me. I like that the label features a mushroom that looks like it’s watching me. Downright cyclopean, if you ask me: 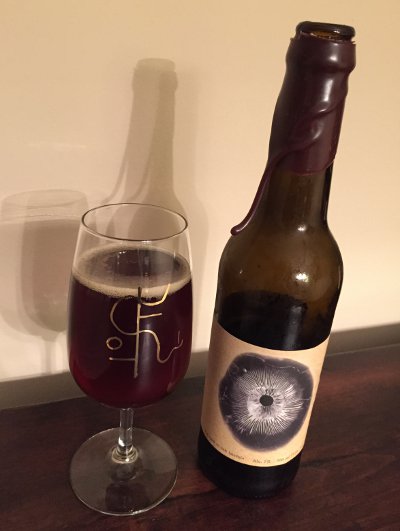 Tired Hands WoodLaHands – Pours a very pretty dark amber color (looks great when held up to light) with a finger of fizzy off white head that nevertheless manages to stick around a bit (though not long). Smells beautiful, tart fruit (cherries), Rodenbachy vinegar with an earthy kick and plenty of oak. The earthy notes really come to the fore up front in the taste, followed by oak and vanilla in the middle, rounding out with a vinous, acetic sour fruit character towards the finish. I’m not a wine guy, but tannins. That’s a word, right? Mouthfeel is hefty enough to support the flavors, well carbonated, a little sharp acidity leading directly into a drying finish. Overall, another winner from Tired Hands. Perhaps not as perfectly integrated as some of their fruited sours, but we’re talking about rarified air there and this is still great. A-

One of these days, I’ll have to post another recap of draft-only Tired Hands stuff. On the other hand, I probably have, like, 50 beers on that list at this point, and most of them will never see the light of day again, so perhaps I can just leave it at that.

Tonight was beer club, a meeting of beer minded individuals from my work who get together once a month to share good beer, a good meal, and good company! We typically congregate at a local BYOB to share all our brews and wines and whatnot. As per usual, much merriment was had by all, lots of beer and wine and good food. It ended up being a rather small gathering by our normal standards, but still plenty of fantastic beer shared by all.

For the sake of posterity, some thoughts on each beer are below. Standard disclaimers about the fact that I wasn’t in a sensory deprivation chamber whilst tasting these, and in a lot of cases, I was only sampling rather small pours, but whatevers. Take these descriptions with a grain of salt if you’re really concerned, but you really shouldn’t be, because I’m pretty awesome. Or not. Whatever. Here’s what I had (in order of drinking, not necessarily in order of the picture above):

And there you have it. Another successful outing, as per usual. Alas, we didn’t get to all the beers we brought (I was particularly interested in Lancaster’s Winter Warmer, but I’m sure I’ll catch up with it sometime). Already looking forward to next month and some more holiday brews… 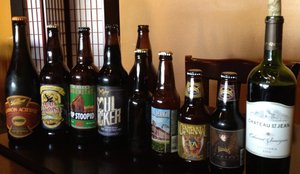 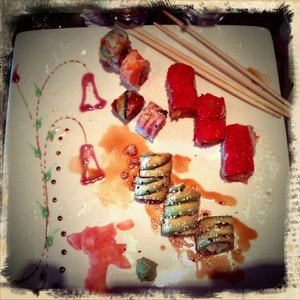 Collaboration beers are among the most weirdest things about the craft beer world. Rarely do you see competitors actively collaborate like this, but then I guess the fact that craft beer only really represents around 5% of the market generally means that they’re not really competitors – their growth comes at the expense of the macros. Or something like that, I guess.

This one is a collaboration between The Bruery and Cigar City. If I’m not mistaken, both come from the craft beer class of 2008 and both enjoy a pretty solid reputation* amongst beer nerds. I’ve already sung the praises of The Bruery before, but Cigar City is new to me, and in a recent interview over at Beer Samizdat, I learn that their brewer has the awesomest name ever: Wayne Wambles. Amazing.

On The Bruery’s website, they have a page for this beer that lists a lot of what I usually call the Beer Nerd Details in my reviews. Things like ABV, IBU, and SRM. But this one has an additional metric that I don’t believe I’ve seen before. Apparently this beer has not 4, but 6 whole shizzles**. 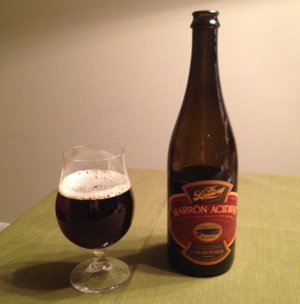 The Bruery and Cigar City Collaboration: Marrón Acidifié – Pours a very dark red color with minimal head. Smell is filled with sour aromas, some sweet fruitiness, and funk. Packed with rich flavors with a beautifully matched tart finish. Very sweet and fruity (cherries are most prominent to me, but other tropical fruits also seem present), and extremely well balanced. Mouthfeel is nice and rich, almost chewy. Low on the carbonation, but it actually works well with this style. Overall, a fantastic beer, among my favorite sours (maybe even the best I’ve had). Indeed, I think it might be one of the most approachable sours I’ve had, which is saying something because this thing is a bit of a monster. A

This was released in the Spring, not making it’s way to the East Coast until early Summer, though I didn’t pick up my bottle until this past holiday season. It’s bottle conditioned though, and the bottle sez it’s suitable for aging up to 5 years. I guess what I’m saying is that I need to buy some more of these for my burgeoning beer cellar program. Also on my to-do list: get my hands on some more Cigar City beer.

* And by “pretty solid” I man astronomical.

** Apparently besting a previous beer called “Four Shizzles”, though records on that one are a bit sparse.