In my grading system for this here blog, a B is actually a pretty good score. It’s not going to melt your face (that’s, uh, a good thing for me) but it’s unambiguously good beer that is worth seeking out. So the fact that every Nebraska Brewing Company beer I’ve ever had has been a B in my book isn’t a hideous disaster, but it’s starting to get a little tiresome (Indeed, I see that my previous foray into their beer contains a similar lament). Granted, this is only my fourth beer from them, but on the other hand, buying four of Nebraska’s reserve series beers means that I had to seek council from a local loan shark (because I already have three mortgages and the bank has long since cut me off). I don’t normally factor price into my reviews because it’s all about the taste. But in general, when shelling out $20+ for a bottle of beer, I can at least talk myself into thinking it was a worthwhile affair. For whatever reason, Nebraska, while never truly disappointing, has also never really delivered in that respect.

In the grand scheme of things, this doesn’t really matter because I’m just some dork on the internets, and like a dope, I keep coming back for more. Like Jay suggests, I should really just admit that I’ve been beaten here and leave it be. In this case, I talked myself into the purchase because it’s a barrel aged imperial stout, truly one of my favorite things in the world, and while I’m a BA nut, I really haven’t had many Brandy barrel aged beers. And this one boasts 50 year old American Brandy barrels, which sounds pretty cool to me. Alas, it was not quite as Sexy as it sounded, though again, it’s not really bad either.

Nebraska Sexy Betty – Pours a dark brown, almost black color with a finger of light brown head that fades relatively quickly. Par for the course so far. Smells of rich dark malts, roast, a little caramel, maybe a hint of that Brandy barrel, but it’s very faint. Taste is similar. It’s got a big roasty note, maybe some chocolate, grainy stuff, and if I really look for it, a hint of that Brandy coming out a bit towards the finish, but again, not much in the way of oak. If I didn’t know this was barrel aged, I might not pick it out blind. Mayhaps a 50 year old barrel has already given all its going to give? Mouthfeel is full bodied, well carbonated, heavy but still a bit nimble (perhaps that Brandy lightening the mood a bit), though definitely still a sipper of a beer. Overall, it’s a solid imperial stout, but I would have really liked to see more barrel character. B

Apparently the initial incarnation of Sexy Betty used 50 year old Cognac barrels (so French, not American brandy), was sufficiently more rare, and more highly regarded too. Whatever the case, I don’t know how much more Nebraska you’re going to see on this blog. Maybe in another year or two, I’ll forget again and decide to take a flier on Black Betty (the base beer for this one), but I wouldn’t hold my breath because I have to figure out how to dodge this loan shark for a while.

Nebraska Brewing, out of, uh, let’s just say Nebraska, is a small brewpub operation that seems to have a bizarrely wide footprint when it comes to distribution. I suspect their strategy here is to send limited amounts of their reserve series brews far and wide in an attempt to pave the way for future expansion (which is on it’s way). Unfortunately, it seems like their tiny operation forces them to place rather high prices on those big bottles of barrel aged brews, which is on the order of $20-$25 around here, but I’ve also seen $30+. This is pretty absurd unless we’re talking about true world beaters, and the beer nerd consensus is mixed on that score.

This is especially troublesome when their brews sit on shelves collecting dust – the kiss of death for beers like Hop God, which costs an arm and a leg but is probably a stale shelf turd by the time you’re ready to risk the purchase. I do wonder if their new production facility and expansion will lead to some efficiencies of scale that will allow for more reasonable pricing. Lord knows that I’ve smashed past that that $20 a bottle mental barrier with a vengeance, but I’m usually rewarded with something unique and amazing. This beer marks the second time I’ve dropped a pretty penny on some swanky Nebraska booty that, to be sure, have been solid, but never quite face-melting (which is, uh, a good thing in my book). In fairness, this barleywine was probably sitting on the shelf a while before it sat in my cellar for a while, so it’s certainly not the freshest of brews. Still, I’d expect more from this. Pricing shouldn’t matter, but maybe it does… what say you? 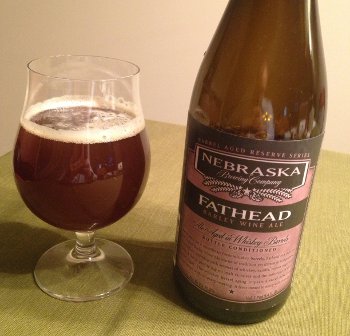 Nebraska Fathead Barleywine – Reserve Series Aged In Whiskey Barrels – Reserve Series Aged In Whiskey Barrels – Pours a deep brown color, burgundy tonez dude, half a finger of white head and actually a decent amount of lacing. Smells of fruity crystal malts, some booze, and a faint but still distinct whiskey barrel character of oak and vanilla. Taste follows the nose, lots of caramel, some brown sugar molasses character, that dark fruit character from the nose, and again, a faint but distinct barrel aged character. The finish has a surprising bitter note, as I don’t get much hop aroma or flavor out of this, but it’s clearly got a big hop component because of that bitterness. Mouthfeel is medium bodied, thinner than I’d expect, but smooth, and relatively dry in the finish too. Overall, a solid BA barleywine, but not mind-blowing and definitely too expensive. B (borderline B+, but I guess I wasn’t in a generous mood when I was drinking this stuff).

These aren’t bad beers, but the pricetag does leave something to be desired. If their expansion leads to slightly lowered prices, I’d certainly hit up their BA Imperial Stout (if I can find it!) but I don’t know that I’d be willing to drop that $25 on an untested beer from them again…

Tonight was beer club, a meeting of beer minded individuals from my work who get together once a month to share good beer, a good meal, and good company! We typically congregate at a local BYOB to share all our brews and wines and whatnot. As per usual, much merriment was had by all, lots of beer and wine and good food. It ended up being a rather small gathering by our normal standards, but still plenty of fantastic beer shared by all.

For the sake of posterity, some thoughts on each beer are below. Standard disclaimers about the fact that I wasn’t in a sensory deprivation chamber whilst tasting these, and in a lot of cases, I was only sampling rather small pours, but whatevers. Take these descriptions with a grain of salt if you’re really concerned, but you really shouldn’t be, because I’m pretty awesome. Or not. Whatever. Here’s what I had (in order of drinking, not necessarily in order of the picture above):

And there you have it. Another successful outing, as per usual. Alas, we didn’t get to all the beers we brought (I was particularly interested in Lancaster’s Winter Warmer, but I’m sure I’ll catch up with it sometime). Already looking forward to next month and some more holiday brews…