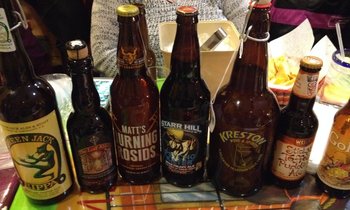 This is as close as I’ll ever get to the ur-example of the Russian Imperial stout style, the granddaddy of all those monster stouts I love so much. Its origins date back to the 18th century, when an English brewery by the name of Thrale’s brewed an extra hearty stout for export to the court of Catherine the Great in Russia. The apocryphal story of the beer’s high alcohol and hop content is that they needed to do so in order for the beer to survive the trip (something about the beer freezing). This is apparently bunk. It turns out that the court of Catherine the Great was just a whole lot of fun, if you know what I mean.

Thrale’s was eventually bought by Barclay Perkins, and soon after that, this beer changed hands again when Courage took over Barclay. There it stayed for, oh, let’s say about 2 centuries. Courage fell on hard times, and by extension, so did their IRS. The style basically went extinct in Britain when Courage brewed their last batch in 1994, but us cheeky Yanks kept the style alive (what with our penchant for extreme beers) and UK brewer Wells & Young’s purchased the Courage brand, re-instituting the venerable IRS in 2011. It comes in an adorable little 9.3 ounce bottle and carries a rather large price tag. I guess I should expect a high cost given the .rar bottle count of just 210,000. This thing is going to taste so rare. Sarcasm aside, I figured a beer this storied and influential deserves a look: 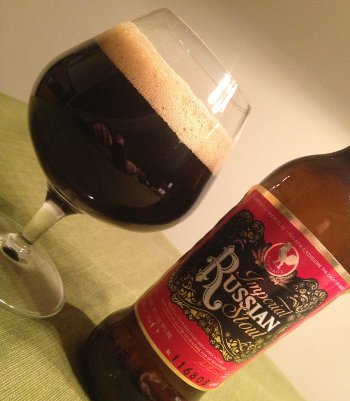 Courage Imperial Russian Stout – Look at me, with all my fancy camera angles. Oh, right, I already set aside sarcasm. The beer pours a pitch black color with a couple fingers of light brown head that leaves plenty of lacing as I drink. Smells of Euro hops, light caramel, toffee, slight roast. The taste features that caramel and and prominent toffee character, those Euro hops (guess: Fuggles or some form of Goldings), with a very subdued roast character emerging in the finish. This is going to sound silly, but it tastes British, the sort of thing I’d call out blind for sure. That Euro hop character was surprising for a big stout like this, and the toffee notes also seem distinctly British. Or maybe I’ll full of shit. Mouthfeel is not quite as rich as I’d like, but definitely a lot to chew on, well carbonated, full bodied, but nothing overwhelming either. An interesting change of pace, for sure, though not a face melter or anything. I’m really glad I tried this, though something about that toffee character always bothers me. It wasn’t as big of a deal in this beer as it is in, say, a British pale ale, but I still found that a bit odd. I’ll give it a B with the proviso that this just isn’t suited towards my tastes.

I’d be curious about how time treats this one. According to Martyn, the hop character fades considerably (unsurprising, especially since he’s drinking a 40 year old bottle of the stuff!), though the toffee notes seem to stick around. On the other hand, I’d rather save my shekels and pick up an American facemelter more suited to my tastes.

There’s something commendable about the cast of Jackass and their willingness to endure pain and suffering for the sake of comedy. Sure, people farting or getting hit in the genitals with a ball isn’t exactly highfalutin, but I’ll be damned if I wasn’t laughing. A few years ago, one of the more pretentious movie critics I actually enjoyed listening to, on the podcast formerly known as Cinecast (#32, if you want to listen in), made a surprisingly vigorous defense of the first Jackass movie. His argument is that our society is, in some ways, constructed to avoid pain, and that the Jackass guys are laudable because they intentionally attempt to do things that no one else would ever think of doing. Yeah, that’s a pretty nerdy take on a movie prominently featuring poo, but it is an interesting perspective. Why do we avoid pain, and is that limiting our lives?

I just got out of Jackass 3D, and things have changed slightly. This time around, I’d say that the movie makes me wonder why society is constructed to avoid bodily waste products like vomit, urine, and feces. Oh no, wait, it didn’t. But it did remind me of that defense of the original Jackass, and I wish I had some sort of crazy disgusting beer to drink right now so that I could describe the experience for you, but alas, I have no Bud Light Chelada or Crazy Ed’s Cave Creek Chili Beer handy. Before taking in the cinematic wonder that is Jackass 3D, I did spend some time at another crappy sports bar… naturally, the selection was limited, but there were actually a few interesting beers on tap, so I tried out a stout, a style I’ve been meaning to get more acquainted with and which could potentially have provided me with a solid base for the vomit induced by the film: 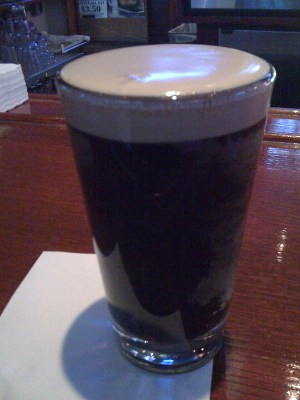 Young’s Double Chocolate Stout: Pours a nice dark black color with a full, thick and creamy head that was retained for a surprisingly long time. I couldn’t really pick up much in the way of smells, but the taste was a solid chocolately flavor. It was a nitro pour, so it was very smooth and creamy (it had very little carbonation) It was chocolately sweet, but it had a bitter character as well – it wasn’t exactly the familiar hoppy bite of an IPA or anything, but I guess that’s why they call it a chocolate stout. It has a full body, but not quite as heavy as I expected. I’ve never really been a big fan of Stouts and while this is certainly something I can drink, it’s not something that’s really converted me to a Stout fan (as winter approaches, I plan on trying out more in the style though, so I guess we’ll see). It’s a solid beer, probably even better than I was expecting, but it’s not lighting the world on fire either. I’ll give it a B

I suppose drinking a heavy, full bodied stout on a full stomach before watching the latest vomit-inducing Jackass film is somewhat daring, but unfortunately, I didn’t actually throw up. I would really have enjoyed describing for you, in detail, the tastes and mouthfeel of the beer coming back up, but alas, it wasn’t to be. I’m sure some of you are taking that as a good thing, but I’m thinking of myself as a failure tonight. Thanks a lot Jackass!