I’ve more or less run out of beer puns for beer clubs, so you’ll just have to deal with it. I know, you all love puns, so you’re all broken up about it, but you’ll just have to deal. Beer club is a meeting of beer minded individuals from my work who get together for a meal and lots-o-beer once a month. As per usual, this gathering is anchored by a core group of stalwarts, along with assorted return guest stars. So it was a solid turnout, lots of beer, good BBQ and just an all around good time. 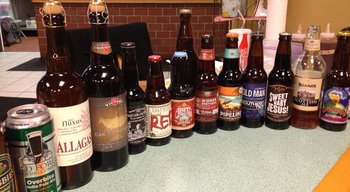 In accordance with tradition, my thoughts on each beer we sampled are recorded below for posterity. Standard disclaimers regarding non-ideal tasting isolation conditions apply, so all you pedants better stay frosty, as nearly all of this will be untrustworthy/awesome. Roughly in order of tasting (not necessarily the order in the above picture):

So there you have it. After a shaky start, things livened up quickly, and this sort of ratings distribution is actually quite nice. I mean, this isn’t the most exclusive of beer clubs, after all, and only a few of us a really huge beer nerds, but it’s a lot of fun and I always look forward to beer club. February’s meeting will come soon enough!