Another Tired Hands bottle release today! However, the bottles being released had all made appearances on tap earlier in the year (or late last year), with no barrel aged components or anything, so while there was still a line, it was not anywhere near as crowded as it was for the last couple releases. The bottle was for ArtiSnale, a beer I already covered a while back. But I also have two months or so of notes on Tired Hands beers that I’m sure will interest everyone, since most of these will never see the light of day again. So I figured it was time for another omnibus collection of notes. Check it: 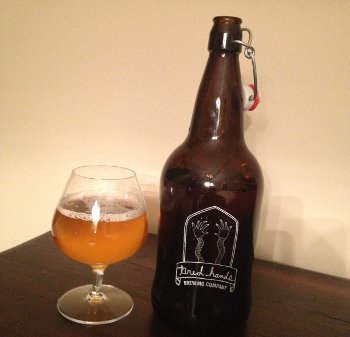 Mrs. Pigman – This beer came out right around when Pliny the Younger was making the rounds in Philly, like Jean was sorta counter-programming his beer nerd calendar. It’s a huge, hoppy monster of a beer (really glad I got a growler of this 11% ABV sucker, rather than sampling 4 ounce pours). Big citrusy floral hop component, very little in the way of malt character. Overall, not as overwhelming as you’d expect from something clocking in at 11.5% ABV. A delicious “triple” IPA, a worthy competitor to Pliny (though I may still prefer the Younger to this). I tried the growler over the course of a couple days, and it was significantly better on the first night (the night I got it filled), while the second night had become more sticky sweet and less hoppy. Not surprising, but still. That first night was a solid A-…

StrangeOwl – A very pleasant hoppy red ale, very drinkable, not going to blow the world away or anything, but I really enjoyed this one. B+

Ancient Knovvledge – A very trangely spiced saison, it’s got some peppery notes, but also some aroma/flavors I can’t really place… (thanks to the internets, I’ve got a full list here: “hemp seeds, nori, black & white sesame seeds, tangerine juice & zest, schezuan peppercorns, and long red hot peppers.”) An interesting brew, glad I tried it, but not something to go nuts over. B+

Entropic – The first in Tired Hands’ Darwin Solera Series, this is a Brett fermented pale ale (using yeast from Crooked Stave). Pours a very cloudy yellowish color witha couple fingers of white, fluffy head. Smells slightly funky, with an odd salinity? Yep, that saltiness shows up in the taste too, kinda like a shellfish salinity, really interesting… Light funk, maybe some lemon lime action… Mouthfeel is nice, medium body, easy drinking stuff. Overall, I don’t really know what to make of this, except to say that I like it! B+

Galapagos – The second in the Darwin Solera series, this is a new Brett fermented pale all that was blended with Entropic. Cloudy yellow orange, smells of funk and saline, very similar. Taste seems to be evening out a bit, more subtle but still complex. This really isn’t that old, but it seems a bit more mellow, less brackish and salty. I actually like this better than entropic, but they’re both pretty darn good! B+ 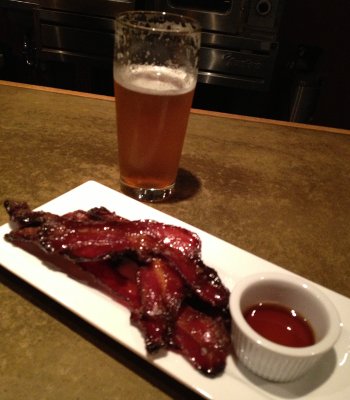 AromaFlavor – FlavorAroma was one of my favorite Tired Hands beers, so I was super excited for this one. It’s a similar recipe, but the hops are different. Pours a deep golden color with a couple fingers of fluffy white head. Smells delicious, tons of citrus and pine, and plenty of floral notes too. Taste has that same hop component, but also an earthy, floral, almost spicy hop flavor that is well integrated with the traditional citrus/pine/floral notes… I’m betting significant Centennial involvement here. Mouthfeel is smooth, lightly carbonated, quaffable. Overall, really fantastic stuff, but I think I preferred FlavorAroma a bit more… A-

A Cold Freezing Night – A pretty straightforward 6.2% stout. Black color, nice roasted malt aroma, some light coffee notes, a relatively straightforward, normal beer. Probably grading on a curve, but this is a B sorta effort. Solid, competent, but not mind blowing… (but then, I like my stouts huge and chewy, so I’m sure others would love this.)

Liverpool – A “magical” dark mild ale, this pours a brown color with a couple fingers of off white head. Smells… British! Light caramel and toffee notes. Also tastes British! That caramel and toffe from the nose, but some nice biscuity character too, maybe a faint hint of subtle toast. Mouthfeel is pretty big for such a small beer (only 4%). Low end of medium bodied, with ample carbonation (more so than most Tored Hands stuff). Overall, a fantastic sessionable beer, if not one that really rocks my world (not that it’s trying to…) B

Stare At Yourself in the Mirror Until You Feel a Burning Sensation – Quite possibly the best named beer ever. Pours a super cloudy orange color with a couple fingers of white head. Smells of bright, juicy hops along with a sorta yeasty character. Taste is lightly sweet, delicate hop flavor, a little citrus but also almost spicy too. Mouthfeel is surprisingly big considering the abv, medium bodied, but smooth and almost creamy. Not entirely sure what to make of this, but it’s good! B+ 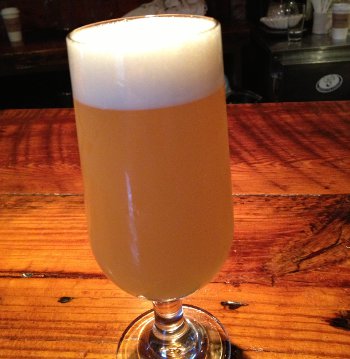 Honestly not sure which beer this is a pic of – one of the pales that’s around this point in the post, I think!

Say It Muy Fabs – A 4% pale ale that I found to be supremely good for such a slight beer. Weird that it does not seem to exist on RateBeer or BeerAdvocate, but I love it anyway. Cloudy yellow, tons of lacing, huge citrus and fruit nose, perfect balance of flavors, utterly quaffable, light, refreshing body, really amazing depth for such a small beer. Maybe I just really needed a drink at that point, but I was very impressed with this one. A-

MagoTago – An IPA made with mangos, this pours a cloudy light yellow color with a finger of head. Huge citrus nose, mango coming through strong, but plenty of citrusy floral hops too. Flavor follows the nose, sweet, floral citrus hops, and that mango coming through loud and clear in the middle and finish. Nice light mouthfeel, quaffable, just really nice. Overall, this is right up there! A-

Bokonon – A hoppy brown ale, as the style goes this is nice, though its hard to compete with some of the other stuff (see previous two beers)! B+

Tabel, Printemps – A saison made with lime and cilantro, this is light and refreshing, really nice little beer, that lime/cilantro combo is prominent but not overpowering… B+

Singel Hop Saison, Pacific Jade – Wow, super “green” hoppy character, like Saaz or Golding, but a little brighter and more intense. Feels super fresh. Mixes well with the spicy saison yeast. An interesting entry in the series, though not my favorite… B+ 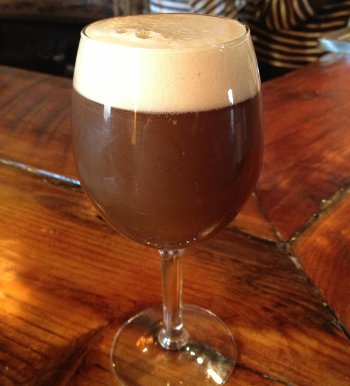 Comfort Zone – Pours a super murky, cloudy, almost chocolate milk looking brown color with a couple fingers of tan head. Smell has that chocolate milk character, but also the lighter saison fruit and spice… Ditto for the taste, which has a very yeasty character that overrides the dark malts… Overall, a nice, yeasty dark saison, but nothing to write home about. B

Phew, that’s a lot of great beer! I usually end up over there every week or two, so I think you can expect to see more posts about these guys…