I think I’ve mentioned before that my craft beer revelation occurred sometime around the turn of the century: a bottle of Hennepin, picked randomly off a well appointed beer menu at the now defunct Moody Monkey restaurant of Norristown, PA. Given that I’d spent the previous four years celebrating the entire catalog of Natty beers (you know, Light and Ice), Hennepin was a mind blowing eye opener. Of course, I still had no idea what good beer was, and given PA’s draconian liquor laws, my beer wonkery grew slowly (one case at a time). The only thing I knew about Hennepin was that it was made by Ommegang and that it was a “Saison”. Exploring Ommegang’s other offerings was rewarding. Exploring every saison I could get my hands on was… confusing.

It was around that time that I began to suspect that Saison is the least coherent beer style in the history of beer. Here’s a quick glance at a typical saisons run back in the day: 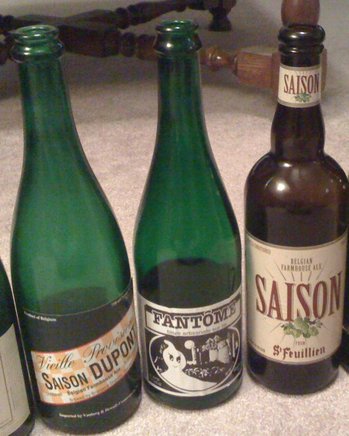 I drank those three beers one weekend and was floored. I actually liked all three, but they’re absurdly, comically different. The one that really threw me for a loop was Fantôme. That’s the one that popped up at the top of the Beer Advocate best saisons lists, so I pounced on it when I finally found a bottle somewhere. Then I drank it and my eyes popped out of my skull. What the hell is this stuff? Nothing at all like Hennepin or Dupont, this thing was weird. It was all lemony and tart and earthy and I had no idea what to make of it. And the damn label wasn’t even in English, so I had no idea what I was drinking. It was super complex though, and even as a nascent beer nerd, I was picking up on that. I’m now a full-on Brett and sour fan, so this is no longer a problem.

Ghost hunting has thus proceeded over the past few years, even as these beers have become harder and harder to find. I’ve partook in a couple other tastings of Fantôme’s “regular” saison (as well as some variants), and I’ve noticed something curious. Let’s call this the strange case of Dr. Jekyll and Mr. Fantôme: sometimes the beer is sour and spicy and funky, and sometimes it’s just plain funky. And sometimes it’s inbetween. My most recent experience leaned heavily towards the funk without the corresponding sour. I have to say, I don’t like that as much, but then, it’s still pretty great: 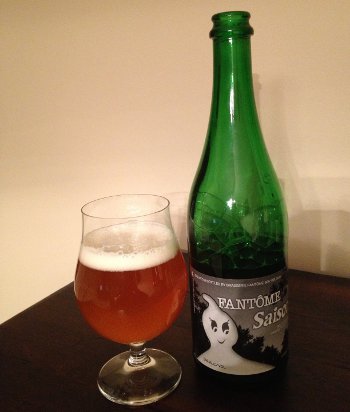 Fantôme Saison – Pours a hazy golden orange color, almost fruit juice looking, with a couple fingers of ghostly (sorry, couldn’t help myself) head. Nose is filled with earthy, musty, funky Brett, along with some unidentified spice character. Taste is sweet and spicy, peppery, maybe coriander too, lots of that earthy funk makes an appearance as well (along with all those weird Brett descriptions like horse blankets and damp cellars), and a hint of lemony zest too. Not nearly as “bright” as I remember, and only a faint hint of tartness. In fact, I even sometimes got a little smoke out of that Brett character. Not nearly as much as La Dalmatienne, but it’s there. Mouthfeel is well carbonated and crisp, but still smooth and generally easy-going. No trace of booze at all. Overall, funky, complex, unique, and fascinating, as always… though I wish there was a little more of that tart sourness, which I know from experience takes this to another level. As such, tough to actually rate: B+ or maybe an A-?

Fantôme is infamous for being inconsistent. This is normally a fatal flaw in a brewery, but given the nature of wild yeasts and bacterial beasties, most beer nerds give Fantôme a pass on this, as when it works, it’s a face melting experience. When it doesn’t, it’s actually still pretty good. I’ll just have to break out that PKE Meter and hunt down another bottle. Speaking of which, I actually have acquired some other Fantôme offerings (and some other wild Belgian offerings), so be on the lookout for those soon.

Update: Apparently the smokey character evinced in this bottle was part of a larger issue with Fantôme’s entire line of beer that lasted about a year and is generally referred to as Smoketôme. This is probably the same thing that was going on with La Dalmatienne. Good news is that the issue has apparently been resolved, even if Fantôme bottles are as unpredictable as ever.