Hailing from the gleaming craft beer mecca of… Butler, New Jersey? Yeah, NJ is actually something of a brewery wasteland, but these High Point/Ramstein fellas have been around since the early 1990s. So why haven’t I heard of them? Well, they only brew traditional German style wheat beers (though they seem to occasionally put out a small batch of various lager styles), which might have something to do with it. Oh, and they’re located in New Jersey.

I’d never even heard of these guys until I spied this option at a local establishment. Being in the mood for something different and never actually having had an Eisbock before, I took a flier on this sucker. Eisbocks are made by taking a base beer (in this case, Ramstein’s Winter Wheat), freezing off a portion of the water, then removing it from the beer, thus concentrating the remaining liquid, increasing body, flavor, and ABV (this is one of the techniques used to make some of those strongest beer in the world title holders).

In this case, we’re left with a relatively svelt 11.50% ABV that is actually much better regarded than I’d have expected. It currently holds the #3 spot for Eisbocks on Beer Advocate and #5 on Rate Beer, and the ratings would probably even stand up reasonably well overall. This isn’t a particularly common style, but I thought it pretty interesting given the way I stumbled on this sucker. So how did I like it? 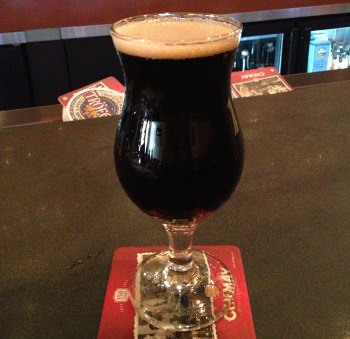 High Point/Ramstein Winter Wheat Eisbock – Pours a black color with half a finger of short lived, lively, bubbly head. This isn’t going to make sense, but somehow, it doesn’t look like a stout. Perhaps my mind is playing tricks on me. Smells of booze, noble hops, fruity malt, maybe some wheat, but the aroma dissipates as quickly as the head. Taste has a lot of different flavors, but none are all that pronounced. It’s sweet, but not at all cloying. Wheat makes itself known, but is not dominant. There’s something here I want to call treacle, except its not like I know treacle that well. At times, it almost feels like a boozy cola… and actually, as it warms up, it feels more and more like soda. Lots of breadth of flavor, but perhaps not a ton of depth. There are some hops too, but also something I can’t quite place… Mouthfeel is very smoothly carbonated, medium bodied, doesn’t feel like such a big beer, and I could see the alcohol sneaking up on you. Not a sipper, but not something to gulp either. Overall, this feel like a souped up soda, and it’s really good. I can’t say as though it will cause me to go on an Eisbock kick or anything, and it probably wouldn’t stand up to my favorite beers, but I’m glad I took a chance on it. Let’s call it a provisional B+.

Certainly an interesting, uncommon beer. I may have to seek out more from these guys. And heck, while I’m at it, maybe I should throw New Jersey a bone and give Flying Fish a fair shake (I’ve actually had a few of their beers that are really good, but for whatever reason, have not posted about them).