In the Beer Justice System the people are represented by two separate, yet equally important groups. The drinkers who investigate crime and the District Attorneys who prosecute the offenders. They meet once a month at a local BYOB to sample beers. These are their stories: 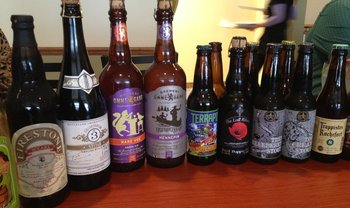 And that just about wraps up this episode of Law & Order & Beer. Fortunately, all As and Bs, so no District Attorneys needed. See you next month.