I give Clown Shoes guff for their lame marketing gimmickry and controversy, stuff like brewing a beer with Holy Water or mounting a half-hearted Presidential campaign (they chose “beer” as their running mate), but it’s what’s inside the bottle that counts. Unfortunately, the only beer they’ve made that really raised my eyebrows was Third Party Candidate… a collaboration with another brewery. Let’s give them another chance, shall we?

Here we’ve got a big 12.5% ABV imperial stout. No gimmickry, no controversy, just a big beer with a quasi-portmanteau name coming from Black Unicorn mixed with Soul Dragon and a label that’s actually respectable. Lets strap those clown shoes on and start this party: 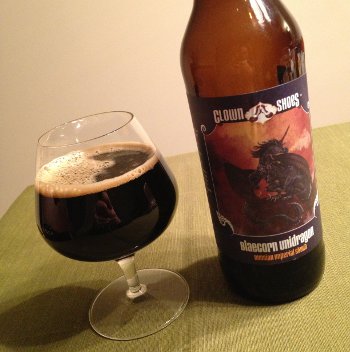 Clown Shoes Blaecorn Unidragon – Pours a deep dark brown color with a finger of light tan head. Smells like dessert; brown sugar, caramel, vanilla, chocolate, and a little roast. Really fantastic nose. Taste starts off with that roast character asserting itself right away, then softening into rich caramel and chocolate before the roast returns in the finish. Some hop character emerges in the finish too, a bitter balance to the big malts. Not quite as delicious as the nose had lead me to believe, but solid. Mouthfeel is full bodied, rich, and a little chewy. Definitely a big beer, but it doesn’t feel like a 12.5% monster either, not really much in the way of booziness at all. Perhaps because it’s more of a sipper. Not exactly easy to drink, but for all the right reasons. Overall, a really solid RIS, and I liked it better than Vampire Slayer. It hasn’t opened my third eye and brought about true enlightenment, but perhaps that is setting the bar too high. This is really nice anyway. B+

Again, this is a solid beer; consider my eyebrows mildly elevated, enough that I’d like to check out a couple more of their beers (that Porcine Unidragon sounds nice), but on the other hand, Clown Shoes doesn’t really excite me too much either…