I have a bit of a dilemma when it comes to Tired Hands. They’re awesome, and they’re close, and it’s a fun place to visit, so I go there pretty often. Now, I’ve enjoyed covering the rise of the brewery these past few months, and I’m sure I’ll be posting more about them, but the strange thing about all this is that for the most part, they don’t make the same beer twice. They’ve got two house beers, HopHands and FarmHands, both quite tasty and only 4.8% too, but other than that, everything else has been a one off. Now, someday, I hope they will repeat some of their more interesting brews. Stuff like Zombie or FlavorAroma or Westy13 (which may be coming to bottles someday). But for the most part, I’m writing about beers that will not only never see the light again, but will probably only have been available for 2-3 weeks.

Is that interesting to read about? Heck, tasting notes in and of themselves aren’t all that interesting. I mean, I’ve found them personally useful, but why subject the rest of the world to them? I do try to use these reviews as a jumping off point for other discussions, but I still resort to pretty straightforward posts from time to time. And in most cases, even the rare beers I get are things that are made on a yearly basis. What about these one-offs? I suppose when the beer is something strange or otherwise special, it could warrant a post, but I should probably ease back on these posts. Or not. I guess we’ll see what happens. 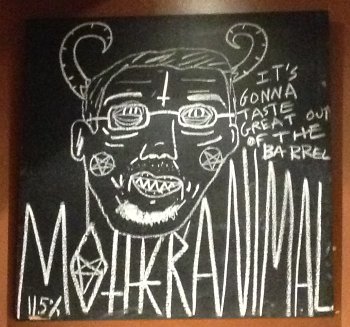 Today’s focus, though, is Tired Hands’ first barleywine, which just happens to be “conditioned on locally roasted coffee and Madagascar vanilla beans”. Given the emergent theme of coffee beers this week, I figured it was worth pushing this one up the queue and talking about it today: 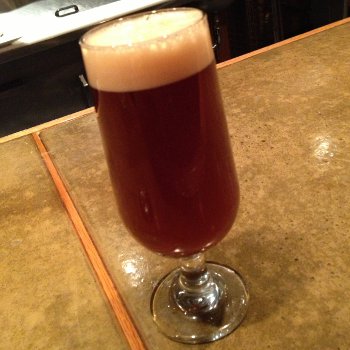 Tired Hands MotherAnimal – Pours a gorgeous ruby toned brown color with a couple fingers of khaki head. Not getting a lot out of the nose, but there’s a sorta mellow coffee and vanilla character going on. Taste is very sweet, but it has a really well balanced blend of caramel, coffee, and vanilla going on here. The coffee is actually quite nice, not roasty or bitter at all, and it doesn’t overpower the other flavors while still making itself known. The vanilla sweetness is probably more prominent, but it works well. Mouthfeel is a little light on carbonation, but that just makes it feel smooth and velvety, with just the faintest note of booze. Despite that, you really can’t tell that this beer is as strong as it is, so I’d say the booze is hidden pretty well. Overall, really nice brew. B+ Would like to try again, possible A- stuff here.

This one isn’t really turning a ton of heads in the RateBeer/BeerAdvocate set, but I enjoyed it more than I thought I would. It’s got a really uncommon array of flavors going for it, stuff you don’t normally see in barleywines, which I appreciated. Alrighty then, here’s a few more quick hits from Tired Hands, compiled over the course of the past month or so. I’m going to refrain from posting my full tasting notes for these, because like I said before, that might be overkill for brews that will never see the light of day again (and some of which are already long gone).

Singel Hop Saison, Motueka – A unique hop character, really bright tropical fruit, non-tart lemon, light saison pepperyness, and it works. This has been a really interesting series of beers, and I’d put this one a step above the Nelson Sauvin, but not quite the heights of the Simcoe (or, for that matter, the next one, listed below). B+

Singel Hop Saison, Amarillo – The perfect balance of citrusy Amarillo hop aromas and flavor with the rustic saison qualities of bready spice. A little light on carbonation, but its just so damn quaffable, it’s taking me longer to write these lame notes than it is to drink! Delicious. Not sure if its just that Amarillo hops are awesome, or if Tired Hands is getting better, but who cares? This is the best Singel Hop Saison yet. A

Falco’s Nerd Flight – All hops, all the time. Bright grapefruit citrus character with floral and pine notes, a strong bitterness throughout, and a great, crisp, dry mouthfeel that makes this easily quaffable. A-

Domo – Barrel fermented black rye saison, aged in a wicked combo of Chaddsford red wine barrels and old Weyerbacher Insanity barrels. Huge sour cherry notes, light oak/vanilla, maybe a hint of chocolate. I was lucky enough to sample this a couple times, and it just got better. Tired Hands sour beers tend to be rather sharp and abrasive, but they grow on me, and this is no exception. A-

California Über Helles – Tired Hands has occasionally been putting out some lagers, but I gotta say, this thing drinks more like a really well balanced IPA. Brewed with Falconer’s Flight hops, this shares that hop character with Falco’s Nerd Flight, though the hops are toned down considerably here. Still, really bright and compulsively drinkable. A-

Whatever, Nevermind – A strong saison, it’s got a really nice lemon zest, light tartness to go along with the more typical spicy, bready saison yeast character. It feels kinda like Fantôme light, more approachable, but perhaps not as complex. B+

Well, that’s a lot of B+ and A- ratings. Another reason to ease off ratings for a bit, I guess, as this is just getting ridiculous!