A few years ago, the non-Inbev-tainted Goose Island took their already spectacular Bourbon County Brand Stout and started making some one-off variants. There was a vanilla one, a raspberry one, not to mention the infamous Bourbon County Rare, which was like the original, except it was aged in 23 year old Pappy Van Winkle barrels. It retailed for $40-$50, but has become one of them .rar wales that drives beer nerds completely bonkers (so yeah, it’s living up to that “Rare” designation). Alas, I will probably never see a bottle of that stuff. I will just have to settle for this most recent batch of Bourbon County Brand Coffee Stout.

Yet another top 100 tick for me (actually, this is currently slotted in at #8 in the world right now, the highest of the BCBS series), it’s like the original BCBS, but with Intelligentsia La Tortuga coffee beans added (I’m no expert, but Intelligentsia is arguably the best coffee in the world, with the possible exception of that weasel poop coffee). As recently discussed, coffee beers are not really in my wheelhouse, but sweet merciful crap, if they were all like this, I’d have no problem at all. Heck, with beers like this, I could really get with the program and crack this sucker open at breakfast. 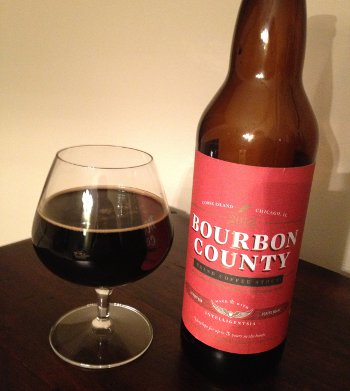 Goose Island Bourbon County Brand Coffee Stout (2012) – Pours a deep black color with just a cap of light brown head that quickly fades into a ring around the edge of the glass. Smells of equal measures bourbon, oak, caramel, vanilla, and coffee, a winning combo if ever there was one. Taste is sweet and sugary, filled with rich caramel, chocolate, and bourbon, a little sting from the booze, and a smattering of coffee. Mouthfeel is big, thick, and chewy, though perhaps not quite as much as I remember the regular BCBS so the flavors don’t stick around as long. It’s got reasonable carbonation for such a gigantic beer, and plenty of warming from the alcohol. Compared to the normal BCBS, this is a little smoother, a little more palatable, a little more approachable (none of which is to say that this is better or worse than BCBS, just that it’s a little different). Overall, yeah, it’s spectacular, just like its unmodified brother. A

To be honest, I think I might still prefer the original BCBS, but hot damn, this stuff was fantastic too. There’s another 2012 variant making the rounds too, called Cherry Rye Bourbon County Brand Stout. My local beermonger has mentioned that it’s on its way, so fingers crossed. In the meantime, I’ve got that bottle of Dark Lord, also made with Intelligentsia coffee, burning a hole in my cellar. Of course, that one’s been sitting around for a while and coffee flavor is supposed to fade with time, so who knows what that will be like.