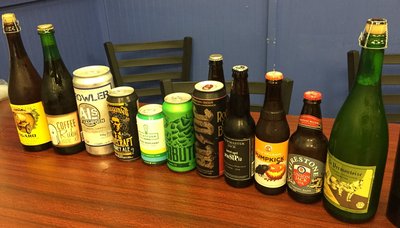 Pizza Boy brewing cohabitates with Al’s of Hampden (an actual pizza joint), which I tend to think of as basically the same operation, though I guess distinctions need to be made. I’m sure there’s some nerdy, pencil-pushing reason for such distinctions, but whatever. Enter Intangible Ales. Brewed at the same location. Using the same equipment. By the same brewer. Wait, why is this a separate brand now? What are you central PA people getting up to over there? And while we’re at it, this beer is technically called FuTuRe PRiMiTiVe – what do you have against vowels and normal capitalization? What is going on? GET OFF OF MY LAWN!

Ahem. Near as I can tell, Intangible Ales is a collaboration between Pizza Boy head brewer Terry Hawbaker (formerly of PA stalwarts like Bullfrog and Farmer’s Cabinet) and local photographer extraordinaire Kristen Mullen. Still not sure why it’s a distinct brand, but Mullen’s photography certainly makes for some cool labels (and the beer ain’t bad either!): 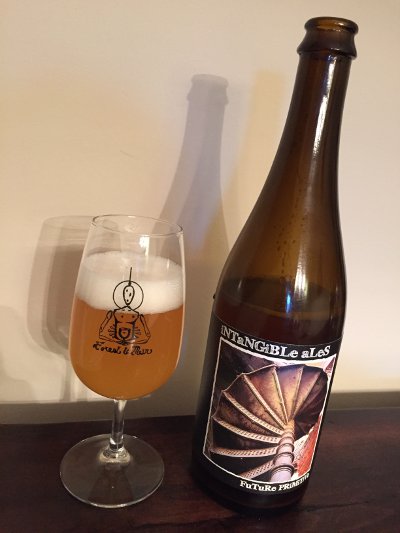 Intangible Ales Future Primitive – Pours a hazy yellow color with a finger or two of white, fluffy head with great retention. Smell has some musty funk, hints of the barnyard, but also a very nice fruity aroma, bananas and pineapple, and just a hint of yeasty spice in the background. Taste starts off like a typical sweet and spicy saison of the Dupont mold, but then the funky Brett character kicks in about midway through the taste, bringing some earthy barnyard character and a little fruitiness, finishing off with a dry bitterness. Mouthfeel is highly carbonated, effervescent, light, crisp, and very dry. Overall, this is a rock solid funky saison. It’s not in the Logsdon level God tier saison realm, but it’s a very nice beer nonetheless. B+

Pizza Boy continues to impress, even when it’s an alternate label like this. I should really explore more of their stuff, and will probably do so soon enough. Stay tuned.

I’ve been enjoying the Pizza Boy bottles that have slowly been making their way to the Philly area, but so far, I’ve not had a chance to try any of Pizza Boy’s most famous beers, whichare, in general, their sours. They are quite pricey, but so far, they seem worth it.

Enter the Golden Sour, a svelt 3.7% ABV ale aged in white wine barrels with lemon zest. According to Stouts and Stilettos, they asked the brewer and “found out it’s a blend of Cantillon, Fantome & Drie Fonteinen cultures.” Damn. Go big, or go home, I guess. And hoo boy, did this go big: 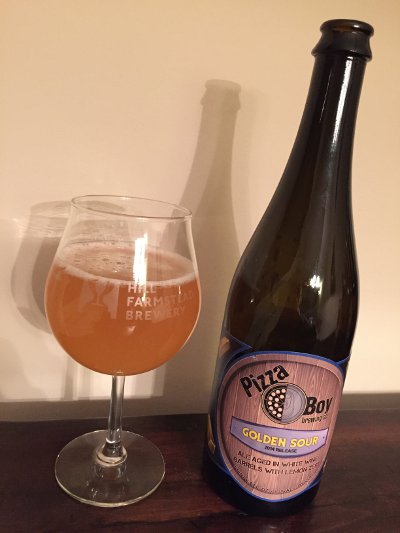 Pizza Boy Golden Sour – Pours a cloudy golden color with visible sediment and a finger of bubbly head that recedes to a cap. Smells great, tart fruit, lemons, musky funk, pleasant barnyard, and oak. The taste starts very sweet, quickly hits a high sour note with lemons and vinous fruit, a little funk, then retreats into oak before a finish which sorta ties all the flavor components together. Great balance between sweet fruit, sourness, and oak. Mouthfeel is light, crisp, and refreshing, well carbonated with moderate acidity, it’s still quite crushable. I will say, this does not feel like 3.7% at all – not that sours need a high abv to pack a punch, but usually when it’s this low, there’s some degree of thinness or something. Not so here. It’s either labeled wrong or really impressive (and I’m inclined to think the latter). Overall, this is fantastic, no questions. A

So I’ve got something called Future Primitive that appears to be brewed at Pizza Boy, but is under an Intangible Ales label. Don’t know what’s up there, but mayhap I’ll dig into that next time…

“West Shore IPA” is not some sort of mutated take on “West Coast IPA”, it’s actually a reference to the Western shore of the Susquehana river near Harrisburg, PA, where Pizza Boy Brewing is located. Of course, depending on how you define the hallowed West Coast IPA (and let’s not get into that Holy War right now), this is also a decent take on the style. As such, it appears to be Pizza Boy’s flagship beer, such that when opportunities for bottling and distribution came about, this was one of the first brews packaged. And indeed, it’s a pretty standard take on the style, well worth checking out: 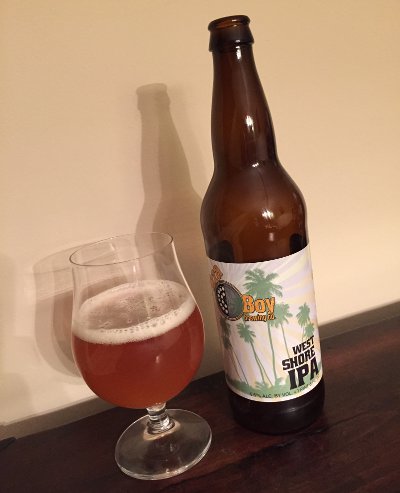 Pizza Boy West Shore IPA – Pours a standard golden orange color with a finger of white head that leaves some lacing as I drink. Smells of citrus hops, grapefruit, a hint of pine in the background. Taste starts sweet with a very nice citrus and hefty pine hop character, yielding to a dry, bitter finish. Mouthfeel is well carbonated, on the lower end of medium bodied, and dry. Overall, a very nice, if a bit typical, take on an IPA. B+

This is pretty emblematic of all the stuff I’ve had from Pizza Boy – really solid and well worth trying. I need to get out there someday and sample their sours, which seem to have a pretty good reputation. Until then, I’ll just have to make due with their distributed offerings!

A few years ago, Al’s of Hampden was your typical PA pizza joint. For the uninitiated, Pizza is everywhere around here. I live in the suburbs, and I have about 4-5 pizza places within about half a mile radius of my house (and probably double or triple that if you make it a mile). Because of this, some places have to differentiate themselves and Al’s of Hampden had glommed onto the whole Craft Beer revolution, featuring a bunch of takeout bottles* and taps. But as craft beer continued to explode, Al found that he had some trouble keeping his taps flowing, and rather than whine about it, he installed a brewhouse and started making his own beer to make up for the shortfall. It appears to be a small operation, allowing them to experiment with all sorts of weird stuff, including some barrel aging and sours and whatnot. Music to my earballs. The brewing operation is known as Pizza Boy brewing, and it’s been steadily building up a good reputation amongst local beer nerds. Alas, they’re located in Enola, PA (a 1-2 hour drive from Kaedrin HQ), and I’ve been far too lazy for far too long. Fortunately for my laziness, Pizza Boy has started to bottle some of their brews and even distribute them. I hope this is a sign of things to come, but for now, I was happy to snag one of these Red Rye IPAs made with Simcoe hops. 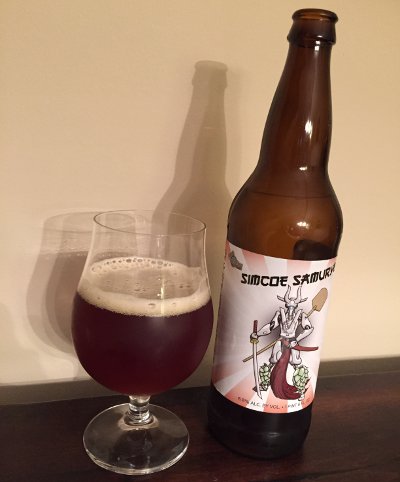 Pizza Boy Simcoe SamuRYE – Pours a very dark amber color, almost brown, with a finger of dense, off white head that has decent retention and leaves lots of lacing as I drink. Smells amazing, lots of Simcoe’s characteristic citrus and pine merged very nicely with some sugary sweet malt aromas. Taste follows the nose, lots of citrus and pine hops, a little dank, some rye spiciness with a hefty malt backbone. Mouthfeel is very well carbonated, medium to full bodied, extremely well balanced. Overall, this is among the best rye IPAs I’ve had. On the upper end of B+

So here’s the plan. On some fine day, I’ll need to take a road trip to visit some PA breweries, hitting Tröegs in Hershey first, then Al’s/PizzaBoy, then Selin’s Grove (a place I really need to check out at some point). Round trip, I’m figuring 6-7 hours though, so don’t hold your breath. I don’t think I’d even attempt this until next year, but it will happen someday. Oh yes. In the meantime, I’ll just have to hope that some of Pizza Boy’s more interesting experimental stuff makes their way down here…

* Again, for you non-PA residents, out fine commonwealth does not generally allow for beer distributors to sell by the bottle (only by the case). This is a fact that I’ve bemoaned many times before, but the good news is that there is a bit of a loophole in that restaurants are allowed to sell by the bottle, hence there are several places, like Al’s, that have really stepped up their selection to serve the hungry market. 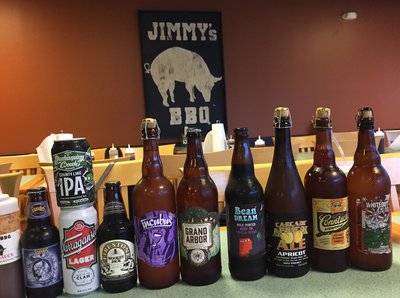