Every year, beer nerds bemoan the influence of big beer and in particular the never-ending succession of breweries that sell out to the great satan, AB Inbev. And every year, a not insignificant portion of same line up hours in advance of the Black Friday release of Goose Island’s Bourbon County Brand Stout and associated variants. This year, I heard tales of people getting in line overnight and still getting shut out of some of these variants. To give some context beyond the timing component (which is surely enough of a weird thing by itself), in the Philadelphia area, temperatures were somewhere around 15°F, which is mighty cold. Me? I rolled up right as a local beer distributor was opening, and picked up a full allotment… then popped over to another place on my way home and picked up some more. All told, it took about an hour, and most of that was just because the poor sales clerk at the first place was all alone and had to build up all the mixed cases that people were ordering, so it took a while (it was all very orderly and friendly, but I felt bad for the guy anyway). (Update: Even further context – most of this stuff can still be found on shelves somewhere. Maybe a tad overpriced, but it’s out there if you’re looking for it.) 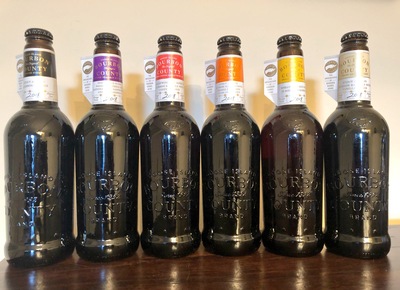 Anyway, this year there were 8 different variants of BCBS, though two are Chicago-only releases. As usual, my favorite is the plain ol, regular BCBS. I suspect Vanilla could give it a run for its money over time, if previous iterations of Vanilla variants are any indication (the 2014 Vanilla Rye was phenomenal as recently as 2017). This year also mucked around with my other favorite release, the Barleywine. In its original incarnation, the Barleywine was phenomenal. After the 2015 infection-plagued batch, they tweaked it (in particular, aging it in fresh bourbon barrels rather than third-use barrels), but it was still great. This year, it’s not being offered at all, being replaced by a coffee-dosed version and a new Wheatwine. As we’ll see below, this represents an interesting change of pace, but ultimately left me craving the old-school barleywine (especially circa 2013/2014). All the other variants have their place and are interesting spins on the base, but not strictly necessary. Alright, enough preamble, let’s get into it: 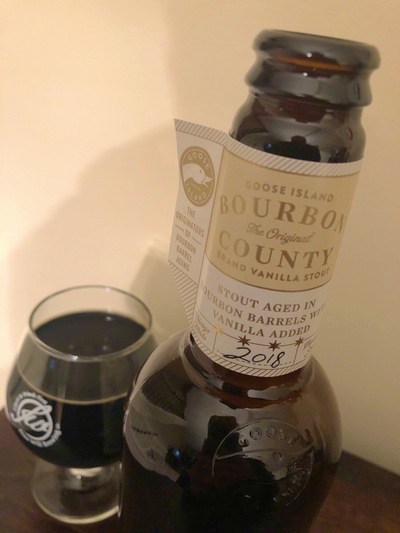 Bourbon County Brand Vanilla Stout – Pretty standard BCBS-like pour, black with not much tan head. Smell is more vanilla forward than previous BCBS takes on vanilla, straddling the line on artificial (I mean, not Funky Buddha levels artificial, but it’s more prominent than you’d expect), but either way, it smells nice to me. Taste is still delicious, standard BCBS profile with that added vanilla marshmallow sweetness, quite nice. Mouthfeel is thick and full bodied, rich and sweet without being cloying, well carbonated. Overall, it’s not quite as great as VR was the last time I had it, but that one got better with time, and it’s quite possible that this will too (of course, it’s also possible that this will turn into an artificial vanilla flavored mess – only one way to find out). For now, it’s my favorite of the variants this year. A- 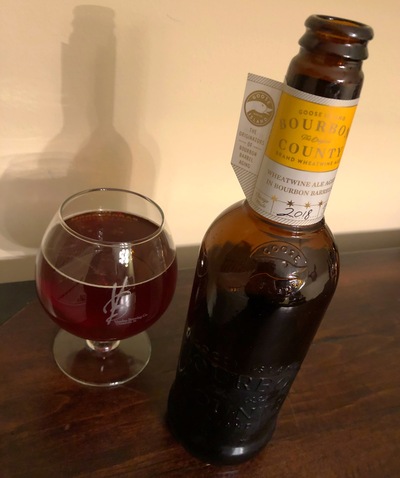 Bourbon County Brand Wheatwine Ale – Pours a clear pale amber color with just a cap of fizzy off-white head that quickly resolves to a ring around the edge of the glass. Smells sweet, candied fruit, maybe banana and coconut, and lots of boozy bourbon. Taste starts off sweet and rich, maybe some light toffee, and that candied fruit, banana with bourbon and a small amount of oak kicking in as well. Mouthfeel is rich and full bodied, sticky, well carbed, with plenty of boozy heat. Overall, it’s a nice change of pace, but it’s not really a substitute for the regular barleywine. It feels like a slightly more substantial version of pale-colored BBA beers like Helldorado or Curieux, meaning that it doesn’t quite take on the BBA character as well as darker barleywines/stouts, but is still pretty good. I suspect this one could grow on me. B+ or A- 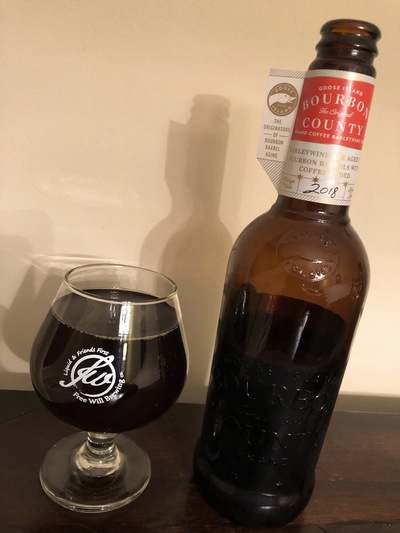 Bourbon County Brand Coffee Barleywine – Made with Intelligentsia Finca La Soledad coffee beans – Pours a very dark amber brown color with a cap of short lived off-white head. Smells of… coffee, and that’s pretty much it. Maybe some underlying sweetness from the malt or bourbon if you really search for it, but mostly coffee. The taste starts off more like a barleywine, rich caramel and toffee, but then that coffee comes in and starts wreaking havoc. Alright, fine, this might be my coffee ambivalence talking, but in truth, it stands out more here than it does in the stout because at least the stout has complementary flavors. Here it sorta clashes. I mean, it’s still tasty and it’s not like I would turn down a pour, but coffee and barleywine together just aren’t my bag. This represents yet another change of pace that is all well and good, but come on, the regular barleywine was awesome, and this isn’t really an improvement. B+ 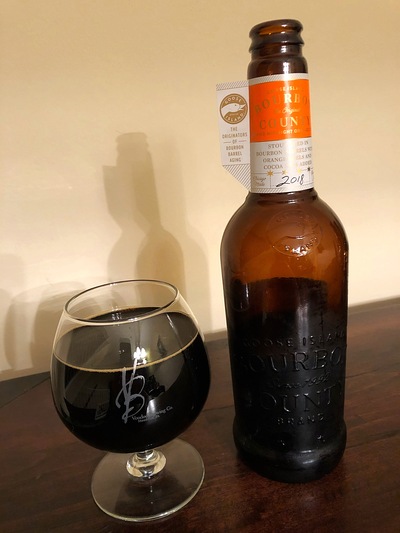 Bourbon County Brand Midnight Orange Stout – Made with orange zest and cocoa nibs – Pours dark brown, almost black, with almost no head. At first, it smells like a pretty standard BCBS profile, but then that citrus and chocolate really pops, especially as it warms. Taste follows the nose, that orange and chocolate popping nicely, especially as it warms. Indeed, the warmer it gets, the more and more this feels like its own thing. The chocolate and orange really overtake the base at higher temps and I’m not entirely sure that’s for the best. Mouthfeel is rich and full bodied, moderate carb, plenty of booze. Overall, its a very nice take on the BCBS base, and I tend to like this more than the other fruited variants I’ve had… B+ 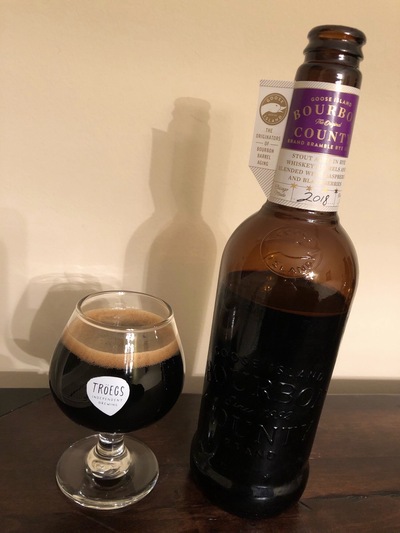 Bourbon County Brand Bramble Rye Stout – Speaking of other fruited variants, this is BCBS with raspberries and blackberries. Pours a similar color with a bit more head than normal. Smell is overwhelmed by jammy fruit. Well, “jammy fruit” is the nice way to say it. You could also say “fruit by the foot with a dash of Robitussin”, but that’s probably a bit unfair. Taste has a nice rich sweetness to it, but that is again overwhelmed by the fruit, not quite as tussin-heavy as the nose, but still not quite “right”. It’s like they buried BCBS and a bunch of fruit in Pet Sematary and it came back “wrong”. I mean, it’s not bad, but I’d rather be drinking regular ol’ bcbs. Unquestionably my least favorite of the year, and vying for least favorite variant of all time. B-

Certainly an interesting crop, and the Chicago exclusives like the Reserve (aged in Elijah Craig barrels) and Proprietor’s (I think some sort of chocolate monster this year) sound great. Still, I always fall back on the original BCBS, and drink plenty throughout the year. Here’s to hoping they bring back the Barleywine next year. In the meantime, stout season will continue with a local brewery’s take on a BBA stout series, though perhaps I’ll mix things up a bit and review something different next. Until then, keep watching the skies! Or, uh, this space. You’ll probably find more beer talk here, and not the skies. But you should probably watch the skies too.