Eschewing the Black Friday events most breweries seem to favor for their barrel-aged stout releases, Victory has always done their thing a day before Thanksgiving, which they hath dubbed Dark Wednesday. Once upon a time, this was for Dark Intrigue (basically barrel-aged Storm King and probably the first beer release that I’d ever waited in line for), but the past few years have seen the rise of Java Cask, and variants of same. This year, we were treated to three new variants on the Java Cask theme (plus the original). Alas, none of these variants is the one I’ve been pining for (i.e. one without coffee, so, like, just “Cask” or maybe “Bourbon Cask”, though I’m guessing the TTB would have problems with that, but I think I’ve made my point.) But then, beggars can’t be choosers, and despite my coffee ambivalence, I always look forward to trying a couple of these every year. Let’s start with my favorite of the year: 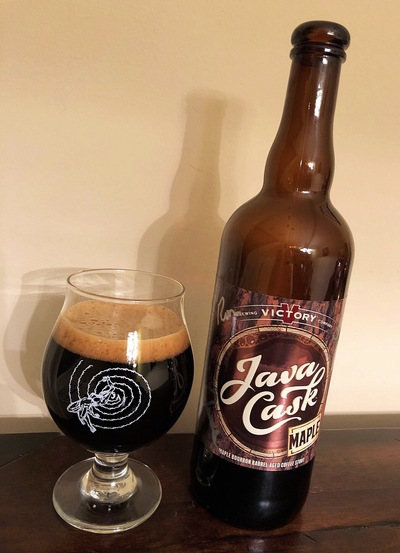 Victory Java Cask Maple – Basically Java Cask aged in Bourbon Barrels that were previously used to age maple syrup (a treatment that appears to be gaining in popularity these days) for 8 months. Also of note, if you click on the picture above to embiggen it, you will see that this bottle was signed by Ron Barchet and Bill Covaleski… and some guy named James, who I’m not familiar with but who I’m sure is incredibly important. – Pours a deep, viscous dark brown, almost black color with a finger of tan head. Smells of roasted coffee, chocolate coffee, maybe a hint of that maple (a light touch in the nose), and did I mention coffee. Taste starts off with a rich caramel note, followed by maple syrup, then coffee, finishing on that bourbon, oak, and vanilla jam. Plenty of coffee for this non-coffee drinker, but certainly less than the nose would imply. As it warms both the maple and the coffee come out more, so that is a thing that happened. Mouthfeel is full bodied, rich, and chewy, ample but appropriate amounts of carbonation, and a pleasant level of boozy heat. Overall, I like this better than the Rye/Rye Vanilla variants and I might even like it better than regular Java Cask, but my lack of coffee enthusiasm is still a limiting factor. Indeed, I might even like this as much as or more than CBS. I’m the worst, but I still give it a strong A- 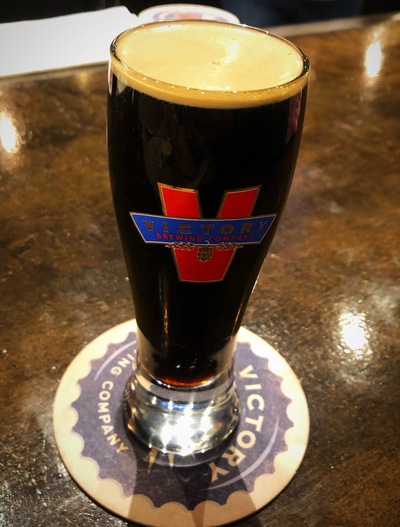 Victory Java Cask Latte – A DONG offering on Dark Wednesday that is basically a milk stout version of Java Cask that is calibrated at a much lower ABV of 8.3%. The addition of lactose is supposed to make up for the decrease in body. I didn’t take formal notes for this one, but I did have two small glasses – one on regular tap and one on nitro. I think I liked the nitro one (pictured above) more, but both feel like imitations of their full-strength big-brothers. This sort of thing has its charms though, and I appreciate being able to sample something without taking in too much alcohol. B 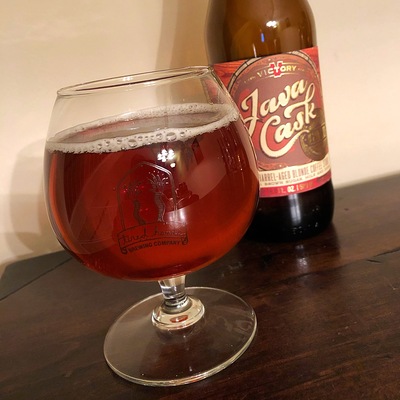 Java Cask Gold – Not sure I’m on board with the whole blonde stout thing, but this is a blonde coffee stout made with lactose, brown sugar, cacao nibs, oats, and dark roast coffee, aged in buffalo trace barrels for 7 months. – Pours a clear, pale orange color with half a finger of off-white head. Smells… a lot like Java Cask. Lots of roasted coffee, coffee, maybe a bit of chocolate, and oh yeah, I almost missed… the coffee. The taste, though, does not feel like a stout. Which I guess makes sense, since it’s not. Sweet, but not that deep, a bit of caramel, some coffee, but they’re not quite playing together as well here; a heaping helping of bourbon, but not particularly well integrated with the rest of the flavors. I like bourbon and all, but it seems to be overpowering the base. Mouthfeel is medium to full bodied, well carbed, and quite boozy. Overall, an interesting experiment, but a little off-balanced and it never really harmonizes into a great beer… but it’s certainly interesting! If a tad disappointing. B-

So there you have it. The Maple variant is the clear winner of the year, and I’m looking forward to seeing what they cook up for next year (fingers crossed for the non-coffee version!) In the meantime, we’ve got some actual Black Friday releases that we’re going to cover, including tons of variants of Kaedrin favorites, so stay tuned.