Back in the early days of craft beer (we’re talking circa 1990 here), small brewers were gaining traction and thus started to test the boundaries of beer. The next couple of decades would lend itself to hops arms races and, more relevant to this post, the competition for most alcoholic beer evar. Believe it or not, one of the opening salvos of this boozy race was Sam Adams’ Triple Bock, released in 1994. After playing around with yeast, adjuncts like maple syrup, aging in old spirits barrels, and other manipulations of the fermentation environment, Sam Adams was able to coax a 17.5% ABV beer out of the ether. Ratings for the few releases of this beer are a bit of a mixed bag, with lots of people calling it one of the worst beers of all time due to the way early attempts at high alcohol brewing produced dead yeast cells that lent a distinct “soy sauce”-like flavor to the beer, especially as it ages (and a lot of the reviews you’ll find are of long aged bottles that may or may not have been properly stored). Indeed, this is one of the few beers that users of BeerAdvocate would actually write about beyond the standard AATMD tasting notes, with some users waxing poetic about a “beer [that] has been described as with a flavor of ‘soy sauce left out in the sun’ a texture akin to ‘manatee feces’ and an aroma simply described as ‘do not smell this.'” 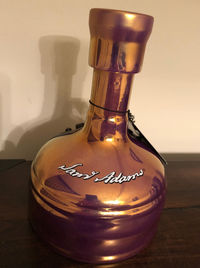 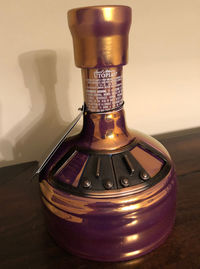 Fast forward a few years, and the fine brewers at Sam Adams had gotten much better at coaxing high ABV out of beer without generating the fabled off-flavors that plagued their earlier versions. In 2002, the first release of Utopias happened. Packaged in a swanky copper glazed porcelain bottle made to resemble a copper brew kettle and sporting a $150 price tag, it clocked in at a then-record 24% ABV. Later iterations would top 30%, but the title for highest ABV quickly moved elsewhere, especially as some brewers (notably the Scottish upstarts at Brewdog) started doing ice-distilling to really crank the ABV up into the 40%-60% range. After Utopias, though, Sam Adams thought they’d focus more on flavor rather than just high numbers. Interestingly, each iteration of Utopias apparently has a tiny, solera-like portion of the original Triple Bock included (by now, I’m sure that proportion is miniscule). 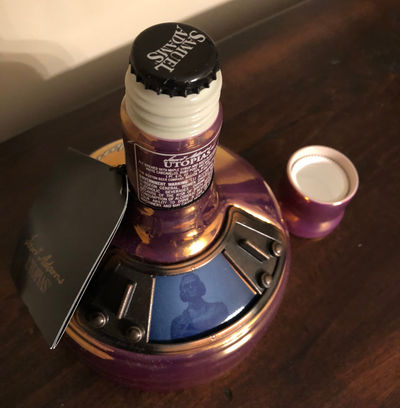 For a “beer” like this, categorization is a bit tricky. Some have called it a Barleywine, and it does share a certain kinship with that hallowed style (#BiL), but others have simply used the generic American Strong Ale, a catchall designation if ever there was one. None of which really describes what you’re about to drink though. The closest thing I can think of is another beer we recently covered here, the experimental Italian barleywine Xyauyù. This is perhaps more due to the completely still nature of the liquid and general flavor family though, as Utopias is pretty clearly doing its own, unique thing. 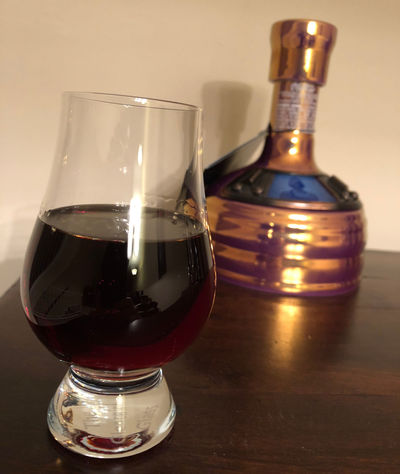 I received the 2017 vintage of Utopias as a (particularly generous!) Christmas gift from my parents last year, and, well, when does one crack open a 28% ABV beer? Most of the year passed until I reached by birthday and thought that would have to be good enough to crack open the bottle (it comes with a standard Sam Adams beer cap (see pic above), but there’s also a screw top to seal it after you open it – and it’s lasted pretty well after my initial taste too, so it’s not like you have to drink the whole bottle at once.) It certainly carries a hefty price tag (even when compared to some of the other, more ridiculous alcohol purchases you could make in wine or whisk(e)y) and it’s not something I could see myself pursuing regularly, but it might be worth splitting the purchase with a bunch of other folks just for the experience. 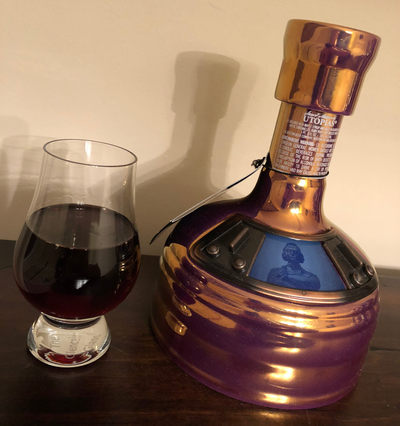 Sam Adams Utopias – Pours a very dark auburn amber color with no head whatsoever, but it’s got legs, like a fine liquor. Smells amazing, intense, rich maple syrup, caramel, toffee, brown sugar, dark fruit, oak, and vanilla. Taste is super rich, sweet, caramel, maple syrup, toffee, dark fruits, vanilla, lots of booze. It’s somewhere between a burley whiskey and a massive barrel-aged beer. Mouthfeel is full bodied, rich, and chewy, tons of boozy heat, maybe harsh for a beer, but nowhere near whiskey burn, and if you’re used to that sort of thing, it’s actually super approachable. I mean, I can’t imagine drinking more than, say, 4 ounces in one sitting, but it feels more like a Port wine than a full strength spirit. Overall, huge and complex, this is unlike anything I’ve ever had before, and it’s very nice. A- or A

Again, at two bills and such a high ABV, it’s not exactly an every day beer, but it’s a singular and unique experience that should appeal to any beer fan (at least, one that also appreciates big barrel aged beers and whisky, etc…). And yes, I’m way behind on some of my reviews. I shall endeavor to have them all sewn up by the end of the year.