When Tired Hands opened the new Fermentaria a few months ago, one of the big, eye-catching features was three rather large oak foeders. For the uninitiated, foeders are very large oak vessels used for long-term aging of beer (among other fine liquids). They are capable of harboring wild yeast and bacterial beasties and imparting some of that oaky character, but despite their size, the actual surface area touching the beer is smaller and the amount of oxygenation is usually less than traditional barrels. They’re good as fermentation vessels and their much larger volume allows for more blending than your traditional barrels (foeders are somewhere on the order of 1500 gallons, whereas a traditional barrel is a little more than 50 gallons). Indeed, lots of Belgian breweries are famous for using foeders in their wild and blended beers, most famously Rodenbach and their blended Flanders Reds.

So Tired Hands has been playing with these new toys of late, and several beers have gone on tap from the foeders. It’s an interesting and distinct feel from regular barrels, so far I’m seeing less in the way of sour and oak, but still some funk in its own way. Astral Plane was a recent bottle release, and to my knowledge, the first such release to originate from a foeder. For my part, I tend to prefer the more typical barrel approach, but this represents a nice change of pace: 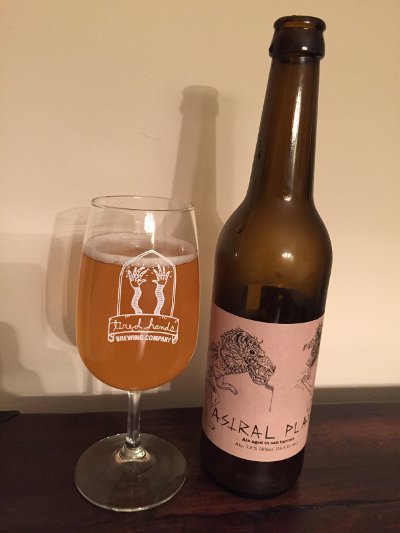 Tired Hands Astral Plane – Pours a hazy yellow gold color with a finger of whispy head that is not long for this world, very nice looking beer. Smells wonderful, lots of funk, some fruity esters, a little earthiness poking around, great saison nose. Taste has a little more oak to it (not a ton though), some sticky malt, but it’s got a lightly funky saison spice and fruit thing going on too, finishing back with that sticky note. Mouthfeel is medium bodied, low to moderate carbonation, more sticky than I’m used to from Tired Hands (lower attenuation? Lord knows I’m super sensitive to lower carbonation, and this might be falling into that spot a bit…), but nothing untoward or improper here. Move it along. Overall, pretty solid little saison with enough funk to keep things interesting and pretty damn tasty in any case. I’m betting some time in the cellar will do wonders for this, and fortunately, I have a few more bottles to test that theory on. B+

Of course, I’m totally in the bag for this stuff, so I’m curious to see how these new techniques evolve as Tired Hands continues to expand. They’ve still got plenty of regular barrels hanging around as well, so it’s not like they’re going away (thank goodness!)