Here at Kaedrin, we’re big fans of FiftyFifty’s Eclipse series of imperial stouts aged in various whiskey barrels. The idea is that you start with the same base beer but age it in different expressions of bourbon and rye. Since the aging period is the same (about 6 months), the only real variable here is the different expressions of whiskey (and the myriad variables that apply to each barrel). In my experience, this has produced some modest but definitely noticeable differences in the resulting beers. For instance, my two favorite expressions of 2012 were the Rittenhouse Rye (very rich and caramelly, oak forward) and Elijah Craig 12 (more roast from the base was retained here, but it’s also got a nice richness to it). Then there were a couple that sorta fell between those two in terms of the amount of roast retained after the barrel character. From the most recent batch, I had the super bourbon forward (but not as oaky) Evan Williams 23 Year and the more chocolaty Woodford Reserve. And so on.

The problem with all this? I was drinking all these beers on separate occasions. Could I simply be making up all these differences? The only way to really tell would be to try them all together… but who can put down several bombers of 11.9% ABV stout in one sitting? Look, I’ve drank some heavy hitters in a single session more times than I should admit, but taking on several Eclipse bottles solo just ain’t realistic. So earlier this year, I resolved to gather as many variants as I could, then hold a comparative tasting and spread the wealth with a bunch of friends. As such, this happened: 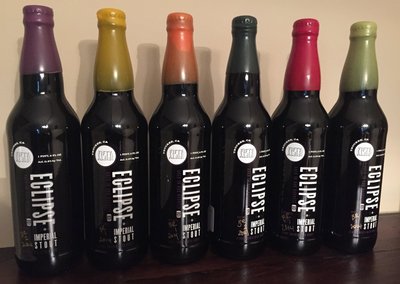 That’s six variants, split across five tasters. Each taster ranked the beers from 6 down to 1 (with 6 being the best and 1 being the worst) based on approximately 4 ounces per variant. 24 ounces per person is much more approachable than 132 ounces. The general methodology was semi-blind. The bottles don’t actually say which bourbon barrels were used, but you can determine the provenance by looking up the wax color. I’m the only person in the group of five who knew anything about that, so I figured that was blind enough. 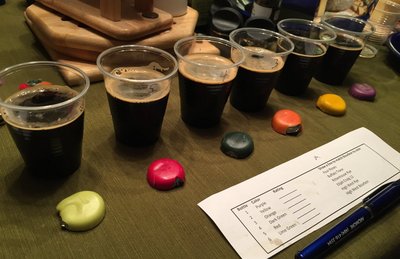 It was way more difficult to differentiate than I thought it would be. This could be for any number of reasons. We’re about 8 months after release, so their distinctive natures may have mellowed out some. Lord knows my basement ain’t exactly the most controlled cellaring environment, which might also have had an impact. Also, much of my memory of these beers comes from the 2012 variants, which were 9% ABV. This year’s batch clocks in at 11.9% ABV, which is significantly different. Add in the inherent unpredictability of barrel aging, and you’ve got some more factors there. Plus, we sampled a few other things before the tasting proper started. I know, I’m the worst. I should totally have locked each attendee in a hermetically sealed room and forced them to sample the beers in absolute silence, but I didn’t have the heart (or firepower) to do so.

Now, it wasn’t impossible to detect differences, and indeed, I had a very clear favorite (Elijah Craig 12) and a very clear least-favorite (High West Bourbon). I kept going back and forth between Rittenhouse Rye and Buffalo Trace as my second favorite, and honestly, I could probably have thrown Four Roses in with those two as well. The High West Rye expression wasn’t really there for me either (but hey, I’ll drink a dram of Rendezvous Rye anytime guys). Of course, there were four other tasters, so here’s the scientific ranking of these six Eclipse variants:

Some things to consider here:

Full data set is on Google Sheets and publicly viewable, in case you want to do your own number crunching.

It was a very fun evening, and a very interesting exercise too. If I were to do something like this again, I’d try to go for fresher bottles, and less variants, but even so, I was still pretty happy with the tasting.