Back in ye olde usenet days, you could start a holy war by asserting a preference for one starship captain over another. Kirk or Picard? These days, such a posting would be seen as obvious trolling or quaint geekery. This is what we aspire to at Kaedrin, so let’s get on with it: As a child of the 80s and 90s, Picard has always been my captain, and I never quite understood Kirk. Well, there’s certainly charisma there, a confident swagger and physicality that Picard didn’t get to demonstrate very often, but I’m a nerd, and Kirk never seemed particularly logical. Cool guy to have a beer with, but not a guy to lead your ship in a confrontation with the Romulans. As I’ve grown older, I’ve gained more of an appreciation for both captains. I’ve actually been rewatching some of the OG Star Trek series, and what I’m realizing is that Kirk isn’t that interesting on his own, but the thing that made that show work wasn’t Kirk alone, it was the trio of Kirk, Spock, and Bones. Their dynamic is what made the show great. Kirk didn’t need to make sense because he had Spock and Bones backing him up with various aspects of logic and rationality. Picard has elements of all three, presenting a wholly different experience (which is as it should be, otherwise TNG would have just been a boring retread). I’ve never much gotten into the other Star Trek shows, so I don’t have much of an opinion on Sisko or Janeway. Archer, though, always made me chuckle because Scott Bakula is such a terrible actor and I kept thinking they’d do a Quantum Leap crossover. Uh, Ziggy says you have to win the war with the Klingons before you can leap.

Of course, Alpine is talking about a local Fire Captain, hence the illustration of the Fire Truck on the label. What we have here is a nice little chocolate oatmeal dry stout, rocking the 6% ABV. Not the sexiest thing in the world, but damn this is tasty. It’s simple, so says the captain! Face forward, move slow, forge ahead… 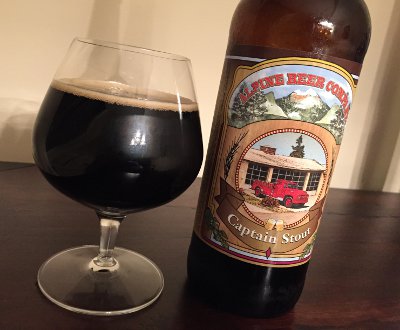 Alpine Captain Stout – Pours a deep, dark brown, almost black color with half a finger of light tan head. Smells great, roasted malt, chocolate fudge, some caramel, and maybe even some vanilla. Taste has a nice roasted malt character, a little coffee and dark chocolate, whisps of bitterness in the finish. Mouthfeel is medium bodied, not watery, but lighter than you’d expect, medium carbonation, smooth. Overall, it’s a nice little stout, pairs well with food, and it’s sturdy enough to stand on its own, even if it’s not an imperial monster. B+

The labels of Apline beers say “Drink Alpine or go to bed!” Well, if those are my choices, send me more Alpine please.