Celebrity farmer. Rockstar farmer. Now those are words you don’t normally see put together, but they’re both used to describe Tom Culton, who cultivates a small patch of land in Lancaster County, PA (let’s say it’s about 70 miles west of Philadelphia), generating obscure, heirloom produce to supply trendy restaurants in Philly and New York. And let’s not forget about Ardmore, PA, as Culton is a good friend of the whole Tired Hands crew, and we often see beers made with fresh fruits or cider from Culton’s farm (most recently, we had Culton Hop and Culton Sour, both made with 51% Culton-supplied apple cider, though there have been a bunch of others that I simply haven’t mentioned in my crazy long recaps).

This particular beer is part of a series of saisons aged in wine barrels with fresh, local fruit. The first was called Out Of The Emptiness, and it was aged on local plums (not to get all Portlandia on you, but I’m not sure if these plums were actually from Culton Organics). I missed out on bottles, but was fortunate enough to get a glass at the release because people are nice. It was awesome enough that I was ready to stand in line for the next one (not that I wouldn’t anyway, because I has a problem, but still). Back Into The Emptiness is the followup, and it’s aged on French Policeman grapes. I tried to do some research on these suckers, and found out the backstory:

After a few trips to France, he began growing heirloom crops. Then he cold-called restaurants. His first major “get” was the venerable Le Bec-Fin, which bought small table grapes from 75-year-old vines that Culton says a French policeman gave to his grandfather.

Add in some local wine barrels, Tired Hands’ house microflora and “ambient microflora from Lancaster, PA”, and we’ve got this beauty: 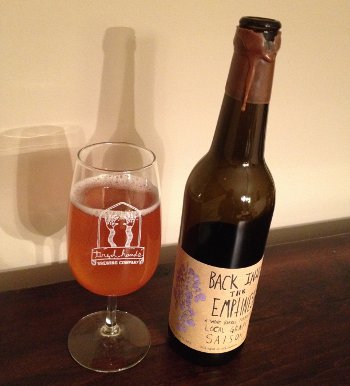 Tired Hands Back Into The Emptiness – Pours a golden orange color with a finger of fizzy, short lived head, though once it settles down it actually left a bit of lacing. Nose has a beautiful oak character, some musty funk, and a very pleasing fruity sour note too. Taste is delicious, starting off sweet, with a tart, vinous fruitiness emerging quickly and escalating into sourness towards the finish. I don’t know that I would have picked out grapes, but this does have a fruited sour feel. The oak comes out in the middle and tempers the sourness through the finish. Mouthfeel is crisp and light, good carbonation (higher than your typical Tired Hands bottled beer), and a moderate but pleasant and well balanced sour acidity. The finish dries things out a bit, but not all the way. Overall, damn if this isn’t their best bottled beer yet (at least, that I’ve had). A

Not quite Romulon-level, but spectacular nonetheless. Already looking forward to getting a taste of The Emptiness is Eternal, which is due to be conditioned on persimmons (watch out, Pediobear!) from Culton’s farm, of course.