Odin, the chief god of Norse mythology, is associated with war and death, but also wisdom and poetry (amongst other things). I’ll have what he’s having. But then, we should be careful. Odin once drank from the Well of Wisdom, but to do so, he had to sacrifice one of his eyes. So, have you got what it takes to tipple with Odin? I’d like to think that I do, but I’m a little disappointed with my choice of drinking vessel, as I did not have any giant fucking ram’s horns laying around (like Odin has on the label). I’ll just have to make due with this snifter glass and this Mjolnir thing.

I’ve heard some conflicting things about this Norwegian beer from HaandBryggeriet. Some folks have noted that the recipe can change from year to year. It’s labeled a Dark Norse Ale, but the Shelton Brothers website sez they use “wild yeast”, which is something I didn’t really get out of the beer (though perhaps that flavor I attributed to chalkiness is really more of a funky, musty thing?) To my mind, this is definitely in the mold of an Imperial Stout, wild yeast or no. Whosoever tipples this beer, if they be worthy, shall possess the power of Odin! 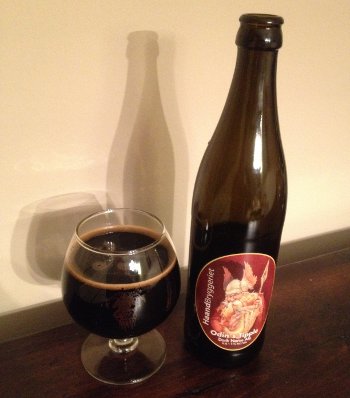 HaandBryggeriet Odin’s Tipple – Pours darker than a politician’s soul (sorry, watching House of Cards tonight), black with a finger of brown head that quicky resolves into a ring around the edge. Smells of rich dark malts, chocolate, caramel, a hint of roast, maybe even some coffee. Taste is very rich, much larger roast here than the nose would imply, coffee too, maybe a hint of chalkiness, but plenty of rich caramel and chocolate too, and for a beer this big and rich, it’s got a good ofsetting bitterness, especially in the finish. Mouthfeel is full bodied, rich, and chewy, well carbonated, a little pleasant booze. A bit burly, so the 500 ml packaging is a good fit and hey, it’s a cold winter over here at Kaedrin HQ, so burliness is welcome. Overall, this is a really fantastic non BA imperial stout. A-

I’ve got to haand it to these wacky Norwegians, they’re pretty good at these dark beers. I should really take some time to explore more of their catalog.