Every year, Firestone Walker invites their neighboring Winemakers to the brewery to tie one on and blend a series of barrel aged component beers for their Anniversary Ale. The Winemakers (no strangers to blending) are divided up into teams and compete to make the best blend. It’s apparently quite cutthroat, though fortunately, no murders this year. I’m trying to be concise here, because this is a subject I’ve already described in wonky, exhaustive detail before. Suffice to say, for barrel aged fanatics like myself, this is one of the most interesting releases each year, and they can vary dramatically too.

The XV blend heavily favored barleywines, and most of the component beers were aged in bourbon and/or brandy barrels (and oh yeah, it was spectacular). The XVI blend was more equitable, a much darker brew though barleywines still had a slight edge overall. The other big change in XVI was the inclusion of Tequila barrels into the blend. This year, things swing back towards the barleywine a bit, though not as much as XV. Here’s the component beers:

So we’ve got around 67% barleywines, 30% stout, and 3% Black Rye IPA (which sorta splits the difference between the two). Also notable is that this year’s blend “only” utilizes 7 component beers (while the previous two used 8), and that PNC with Tequila barrels is nowhere to be seen. So this comes in somewhere between XV and XVI in terms of the components, and I will say that it does taste more like a barleywine than anything else, though I don’t quite think it reached the heights of XV: 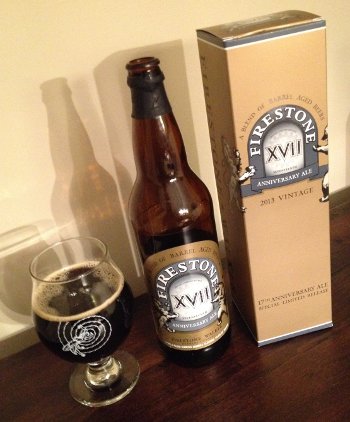 Firestone Walker XVII – Anniversary Ale – Pours a brown amber color, garnet tones, a finger of light tan head that sticks around a bit. Smells of various spirits, boozy but not hot, some caramel-like notes and bready malt too. Taste starts off sweet, quickly moving into a rich caramel note, maybe a hint of fruity malt character, then comes various spirits and the one-two punch of oak and vanilla. The spirits here seem much less Bourbon focused than in years past, and looking at the component beers, perhaps that Brandy is asserting itself more than in previous years, though not in a dominant way. Call it the power of suggestion if you like, but this taste is very complex and evolves as it warms up, with the various flavors emerging or mellowing as I drink. The taste profile is more akin to a barleywine than anything else, closer to XV (which was clearly barleywine) than XVI (which was much more muddled, though still very nice). Mouthfeel is full bodied and rich, but velvety smooth. Some pleasant booziness, a bit of heat, but given the cold weather of late, this is a welcome feature, not a bug. Overall, yep, it’s fantastic. Better than XVI, but not quite at XV levels. But when you’re playing at this level, these distinctions are really splitting hairs. A-

Of course, all of Firestone Walker’s barrel aged beers are spectacular and worth seeking out. It’s seeming like I’ve missed out on last year’s release of Velvet Merkin (local beermonger sez that government shutdown last year delayed and maybe even limited distro in this area, which could be total BS, but I still hope to track down a bottle somehow, someway). Rumor has it that Stickee Monkee will be coming to bottles and seeing distribution for the first time this year as well, and then there’s their first wild ale, The Feral One. So what I’m saying is that I’m going to be hunting for lots of Firestone beer in 2014 (because don’t forget about world class bottles like Sucaba and Parabola)