Just in the nick of time. This was scheduled for earlier in the month but got delayed due to snow and other such things. But we persevered, and Beer club marched on. For the unawares, beer club is a gathering of beer minded folks from my work, who get together once a month at a local BYOB for beverages and fun. 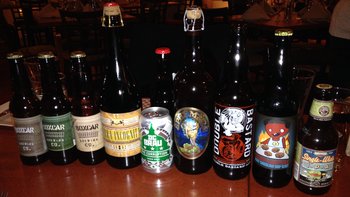 For the sake of posterity, some thoughts on each beer are below. As per usual, these are off the cuff responses with no formal notes, so they’re basically useless for you, but I’m including them anyway because why should I care what you think of my drunken recollections of these beers? In order of drinking (and not in the order pictured above, and there are definitely a couple beers not pictured at all because I took the picture early and didn’t feel like updating it later and why are you so confrontational about this, it’s just a thing, and fine, you want to fight about it? Let’s do this thing. Or not. Whatever. What were we talking about?)

And that just about covers it. Good times had by all, and I’m already looking forward to the next installment (which should be sooner, rather than later… hopefully!)